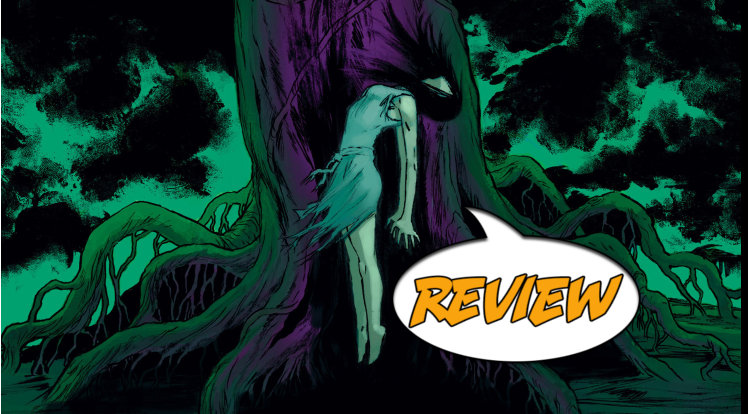 Cutter #1 introduces the titular serial killer and the high school friends who killed her. The Cutter #1 writing team of Robert Napton and Seamus Kevin Fahey cut right to the chase with a murder in the opening pages of this issue. Emily, the assumed-dead-but-actually-a-serial-killer, wields garden shears as her weapon of choice as she takes down a man named Chad

The focal character of Cutter #1 and jerk-guy leading man is Jeremy. Jeremy is about to become a new father and his world begins to unravel when he learns of the death of not only the aforementioned Chad fellow, but a woman named Amy Barnes. It turns out that all three of them were high school friends who recently got back in touch with each other, thereby, making Jeremy a pretty nice looking suspect from where the investigators are sitting. Further to that, there are implications made about halfway through the issue by Napton and Fahey that Jeremy is known to the Sheriff and perhaps not well-liked by the man.

Jeremy becomes more and more unraveled as Cutter #1 continues along with Jeremy impressing upon his wife that it would be in her best interest to spend some time away from him, with her mother, and proceeds to set up a panicked meeting with another high school friend – George – in the middle of the night. They bandy around the name “Prospect Creek” before Jeremy goes on to blame someone named “Emily Higgins” for the gruesome murders. However, Emily is dead and it doesn’t take a genius to have ferreted out that something very, very bad went down between Jeremy, his high school friends and Emily.

Napton and Fahey, to their credit, don’t spell out the death of Emily and the precursory events to Cutter #1, rather they have Emily take another life in the closing act of the issue and, then proceed to self-mutilate … and this is where I take issue with the events of Cutter #1. Granted: horror book, so violence and injury come with the territory, but the memory of Emily is treated with such disdain and litter with such implications that even amongst her presumed-friends she was exiled and takes gratification from causing herself physical harm on top of causing them harm smacks of victim-blaming. This is a very serious misstep in the storytelling, from my perspective, and is a stain upon an otherwise interesting story being told. It could have been a place to make a stance against bullying rather than making Emily damaged from the get-go.

We meet three more character who were implicit accomplices of Jeremy et al in the Prospect Creek incident (read as: Emily Higgins’ assumed murder), and there is an interesting allusion that Emily may be living closer to home than both the characters and readers think to close out Cutter #1.

Napton and Fahey have penned an interesting first issue here that lacks a little for finesse. The series will likely work better as a trade, but for horror fans Cutter #1 would be a good story to dive into.

ART FROM A HIGH SCHOOL NOTEBOOK

The writing team on Cutter #1 definitely has a concrete idea and plan for this issue and the ongoing series, it’s really just too bad that the art does not live up to it in any way. Artist Christian DiBari’s pencils are just that, occasionally some panels will be inked or something within some panels will be inked and that is probably supposed to be a stylistic choice, but it reads as sloppy, unfinished.

All the men in Cutter #1 wear the exact same face, in fact, there is a scene toward the end of the issue where Jeremy and Carl are both turned toward “camera” and they have identical features and expressions. The only thing that separates them on the page is a slight difference in hair (light versus dark), and, unfortunately, the women are in much the same boat.

DiBari’s work throughout Cutter #1 feels like readers are being dropped into a high school sketchbook with some word balloons slapped on top of it and is definitely the sore thumb of the issue.

Cutter #1 has an interesting idea that is not perfectly flushed out. There is potential here for it to grow into a genuinely frightening story that also has something to say and is worth the read if you can get over the art.