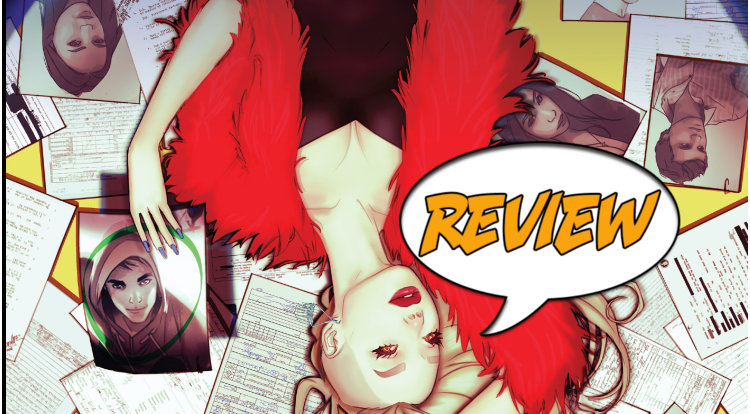 Cloaks #2 highlights Adam’s recruitment into the same organization his presumed-dead father was a part of and the reveal of Evy’s true nature. Cloaks #2 is written exclusively by Caleb Monroe (who co-wrote the first issue), and does an excellent job at building on the characters and concepts introduced previously. Adam doesn’t deal well with the reintroduction to his father – enhanced by the fact that they are in a police interrogation room being observed through a two-way mirror – but Blackstone has some interesting things to say.

In a bit of an exposition dump we learn that Cloaks is a barely-legal government organization that uses specific people with very specific skill sets in order to function as an “operative” for the United States Government or – as Adam sums it up – a spy. Given the choice between being a spy and going to jail Adam makes probably his best decision in all of Cloaks #2 and agrees to enter into his father’s employ.

Cloaks #2 manages at Robin: Boy Wonder joke (much to my own delight), and a lapses into the requisite training montage where Adam learns deductive reasoning, profiling and physical combat among other skills. Training starts to go a lot less smoothly when a, an indeterminate number of days later, a white alert sounds at the Cloaks facility.

Naturally, of course, when Adam is ordered to remain in the safety of a locked room by his keepers he ignores them roundly and wanders out into the hallway. It is wandering around these corridors that he encounters Evy (the young blonde woman readers will recognize from issue one), who is not only friendly, but kisses Adam, knocks him out and manages to make off with a list of rejected recruits and sets into motion the rest of the events of Cloaks #2.

Cloaks #2 spends its final act fixated on the search for Evy. With the kind of information she has and her history with Cloaks – which we don’t get a lot of details on – she instantly becomes public enemy number one. Adam’s pre-existing fixation on her – in her previous persona Evy was a blushing fangirl of Adam’s, so it’s not a difficult leap to make – and his new rank as spy he is the natural first choice … and it doesn’t take Evy long to reappear.

Monroe has done a great job bestowing a believable voice on his adolescent leading man, everything from Adam’s righteous over-the-top anger to his easy bravado rings true and feeds the overarching narrative of his hero’s journey – Cloaks #2 being the training faze – and this issue is a really fun ride. Evy is interesting as she is set up as the antagonist and I look forward to the issue that houses their faceoff.

Mariano Navarro is the perfect artist for Cloaks #2. His art is more cartoonish than realistic and very smooth and polished. Navarro’s clean presentation serves a world where prestidigitation and espionage collide. For example, the physical combat section of Adam’s training allows the characters’ strength and abilities to speak through their physical form rather than their words.

As Cloaks #2 continues and the aforementioned white alert happens no one is moving smoothly, their bodies cut harsher angles as the adult cast of the comic panics to get the situation under control. Evy herself – who could possibly be an adult, but in all likelihood is closer to Adam’s age – is always smooth, she moves effortlessly in and out of the panels just like a ninja.

Navarro does an excellent job in Cloaks #2 of letting the characters body language enhance the narrative Monroe has put down on the page. His world is dynamic and colourist Gabriel Cassata has splashed bright tints on top to really make the art pop off the page.

THE BOTTOM LINE: CHECK OUT THIS MINISERIES

Cloaks #2 is the halfway point of the miniseries. The series has been fun and clever and has all the creatives working together seamlessly. The magic here is more tangible than in Unwritten or Books of Magic with an underlying spy story that a lot of people look for in indie comic books. Check it out.

Cloaks #2 sees Adam get picked up by a secret governement organization and begin his formal training while at the same time being given the identity of his first target.