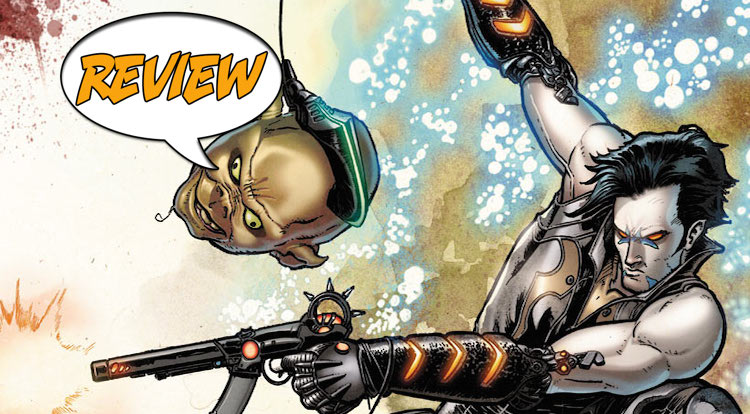 That son of a bastich is back…well sorta.  Lobo has returned to the New 52 sporting a sleek new look and some wicked knives.  But is he worthy of having his own ongoing?  Major Spoilers has your review. Previously in Lobo:  Lobo was a muscular biker with lots of leather and chains.  Turns out that was an imposter and this is the real Lobo.

He’s a giant biker with dreadlocks, chains and can’t die.  That would have been my response if you’d asked me who Lobo is before reading this issue.  It might have helped that I had next to no connection to the character, for Lobo #1 is a completely new version and Cullen Bunn wastes no time throwing out the old and bringing in the new.  We’ve seen the new Lobo before and know that the other Lobo stole his identity though I’m unsure why or how.  The two Lobos have a little chat (old Lobo only a head) and then new Lobo completely fries the imposter with a gun so hot it will allegedly keep imposter Lobo’s blood from regenerating.  It was a fun, if too brief, interaction and I wish I knew what occurred before this scene.  From there Bunn drops us into the story and we get a glimpse of Lobo’s past.  Apparently he’s a bit of a lover and has some hang ups about the destruction of his race.  This was strange and put a more serious tone on a character that was always lively and funny.  I’ve heard Lobo was a parody of older 90’s characters so I’m curious if Cullen Bunn means to use this new version to comment on the seriousness of the current DCU.  If that’s the case, it will turn out to be a cool book but otherwise it’s a tad bland.

From there the story is fairly simple as Lobo is hired to take out a group of assassins before they kill their target.  Of course, the target is on Earth and much like Lobo, I was disappointed.  Too much of the DCU revolves around our planet and I would like to see Lobo dropped into more alien worlds.  While this Lobo is a little more serious, make no mistake, he’s still a bad mo’ fo’.  He kills his targets in wonderful ways and has fun the whole time.  Bunn does a good job keeping a brisk pace and I was entertained all the way to the end.  The cliffhanger was enough that I’ll be checking out the next issue for sure.

Reilly Brown draws one of the best versions of the new Lobo that I’ve seen, though admittedly that isn’t a lot.  He blends the realism and “comic book” elements well in his style and doesn’t shirk on details.  I particularly liked the flashback scene even though Lobo looked like he belongs on the cover of a romance novel.  When the action starts, it chains together well with some cool shots of Lobo’s chains whipping around cutting people/aliens apart.  The violence isn’t too graphic or over the top and depending on who you are, that’s good or bad.  I could have used a bit more blood, considering Lobo is supposed to be a tough, wicked S.O.B.  Some faces look odd at times but I rarely found problems and nothing turned me off completely.

Lobo #1 is a good setup issue that moves at a quick pace.  The character is certainly a departure from his previous incarnation and old-time fans might be disappointed.  While I would have liked to see more interaction between the two Lobos, as well as how they finally met, the action fun and Bunn does a good job jumping right into the story.  It’s worth a read, especially if you’re a new fan with little familiarity with the character.

Lobo #1 is a decent start to a series that re-imagines the character, especially for new readers.