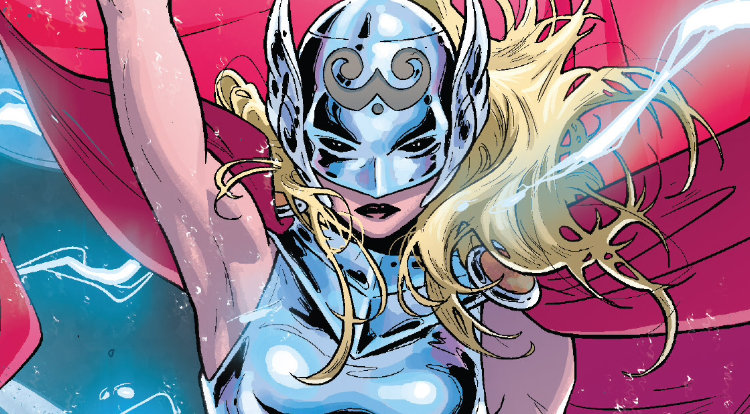 This week heralds the beginning of the already-infamous Lady Thor story arch written by Jason Aaron and drawn by Russel Dauterman. I’m a lady, I read the issue first thing this morning and I have some opinions about it.

First off, let’s go over the biases: I’m not a regular Thor reader, but I have a working knowledge of the characters, settings and recent events in the run and I thought the idea of Lady Thor was pandering. I feared that this issue, helmed by two male creators, could read as condescending and heavy-handed, rather than presented as an interesting opportunity to explore different elements of a classic Marvel superhero and develop some secondary and tertiary characters.

Now that you know that, let’s move on.

I actually really liked this issue, a bit to my own shock. Right off the bat – Lady Thor is not a big part of this issue and there is no clarity regarding her identity – not even a subtle hint. Ignoring the fact that Thor is the godling’s name and not a title, I was really expecting Sif, Jane Foster or whomever to be trotted out on page one, slide on the helmet, pick up the hammer and call it a day. Aaron is refreshingly better than that and this Thor arch is shaping up to be a mystery and I couldn’t be more enthused for that. The Asgardia of Thor #1 is lacking something. While they are replete with leaders – both Odin and Freyja vying to stride the throne – and, interestingly, Aaron has Freyja not only the more empathetic character compared to the All-Father, but much more empathetic to Thor’s suffering. Freyja’s focus is on her son, his grief and the void his grief is creating in their magic-based society. For his part, Odin is solely focused on the retention of his own status, his approach to Thor’s grief being more of the walk it off, rub some dirt in it vein of parenting.

Before we’ve even seen a woman take up the hammer Aaron and Dauterman have a woman in a position of power: the All-Mother rules Asgardia and has been doing so successfully for quite some time, she is inherently more likeable in her approach to dealing with the present tragedy facing her people and threatening the status quo of her culture than Odin and Freyja outwardly manifests concern for a character who, yes, is the God of Thunder, but is also her son. Freyja’s reward comes in her final appearance of the issue where there is the strong visual implication that she is about to heft Mjolinir. The reverent presentation of Freyja aside, we only get Lady Thor on the final page of Thor #1. There is a lot of time in the issue spent with Dude Thor, which feels a little bit like a back step for a book with this storytelling device. However, I’m willing to let it slide and not scream my head off about it because I trust that Aaron will focus more and more on the cast of female characters that already exist in the world of Norse Mythology and Marvel’s Thor and are so often minimalized (Sif being the most obvious example). I also trust him to  introduce a new audience to these strong women and further feed the aforementioned mystery of who is Lady Thor? To conclude, Thor #1 is a great issue because it is subtle. We don’t have a woman marching onto the moon in the first panel, backhanding the fallen Odinson out of her way and claiming Mjolnir as her own in a strange mysoginy-inspired entrance. Instead, the creative team have strong representations of a woman’s roll in the Asgardian society, their quiet dignity and strength and they’ve bundled it as a question. Mysteries are hardly a new narrative style for comic books, but they are not ones often employed in Thor. It is refershing to have characters of my gender treated with respect and even reverence, a growing trend in the comic book world and one that I look forward to growing across all publishing companies as the days go by.

Plus, Dauterman had the wherewithal to have Lady Thor’s costume cover the majority of her body in a heavily Dude Thor-inspired armour because she is a warrior who wields lightning and is about to hurl herself into battle!

So, no, I haven’t read anything beyond Thor #1 and I really haven’t seen that much of Lady Thor herself. That being said, Thor #1 is so full of promise, so well-crafted and just way better than I ever hoped it would be. Thank-you Jason Aaron and Russel Dauterman (two men, no less!), I’m in for the rest of this series if the issues continue in this vein.