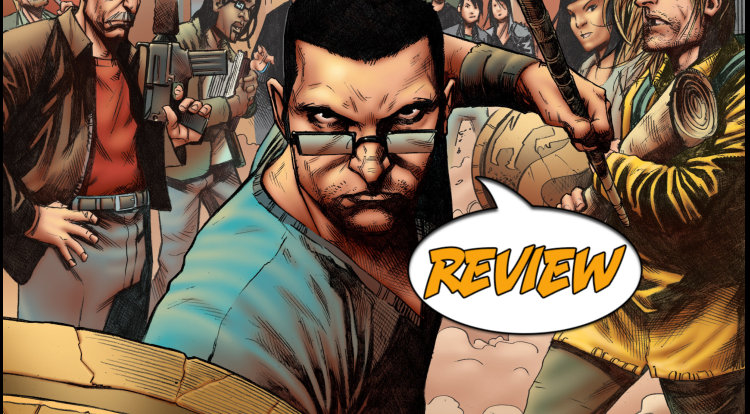 A Town Called Dragon #1 tells the story of a small town in Colorado with ties not only to ancient Vikings, but mythical creatures as well. A MYTH THAT SPANS THE AGES

A Town Called Dragon #1 is the latest offering from prolific comic book writer Judd Winick and one of the newest public offerings from Legendary’s new comic book imprint and it’s pretty great! The events of this first issue center around a town called Dragon, Colorado and the not-so-subtle-connection to its namesake.

At 58 pages, the opening plot of A Town Called Dragon #1 takes place in 1002 A.D. A hoard of blonde warriors defeat the last dragon beast in the world (or at least in Norway), but they are left with the conundrum of what to do with the leftover dragon egg. Winick provides a list of possible methods for dealing with the egg – all of which have been tried and failed in the recent past – leaving King Olaf Truggvason and his warriors with an extreme decision to make.

Winick takes this opportunity to not only include the mythology of creatures, but from human history, and has King Olaf Truggvason employ the services of Leif Ericson. Ericson and his crew are tasked to sail as far from Norway as they can, then walk until they cannot walk anymore, burry the dragon’s egg and seal it away from human curiosity.

Twenty-three pages into A Town Called Dragon #1 Winick has the narrative return to the titular location, strewn about with dragon paraphernalia in a typical tourist-trap manner. Local tragically-not-quite-all-there town resident Mickey takes a solo free climb up a local mountain (it is Colorado after all …), only to discover a group of people he deems to be German terrorists scanning into the earth and discovering the long-dormant dragon’s egg.

A Town Called Dragon #1 concludes with not a lot of the townsfolk believing Mickey’s claim and him returning to the scene of the crime. Rather violent ends are made by most of the German scientific team and it would appear that in coming issues the residents of Dragon, Colorado are going to come face-to-face with their magical namesake.

Judd Winick has put together a really fun, fast-paced issue in A Town Called Dragon #1. It has the violence one would expect from Legendary’s media and manages to deliver a lot of exposition without being boring. It is a promising set-up for future issues and a series I would be interested in following.

Geoff Shaw does great work in A Town Called Dragon #1. Even when characters are standing still and speaking the images are kinetic and full of energy. The Viking characters, in particular, carry with them a spirit not dissimilar to another group of historical Legendary-owned characters – 300’s Spartans.

Shaw also brings a scale to the settings and battles of A Town Called Dragon #1 that honour the publishing company’s cinematic roots. Combat and carnage sprawls from page-to-page. Events in this issue are violent – though not as startling as something like Ryan Ottley’s work on Invincible – and they feel earned and that is what I found the most engaging about them.

A Town Called Dragon #1 is a good looking narrative, the scale of which leaps right off the page and into the reader’s eyes.

THE BOTTOM LINE: START THIS QUEST

A Town Called Dragon #1 is almost three times the number of pages for $3.99. It’s well written, has a clearly laid out mythology, really great looking fight scenes and dragons! A fantastic issue for mythology fans or people looking for an urban fantasy.

The history of Dragon, Colorado and the implications of it's namesake are explained in this fun, kinetic first issue.