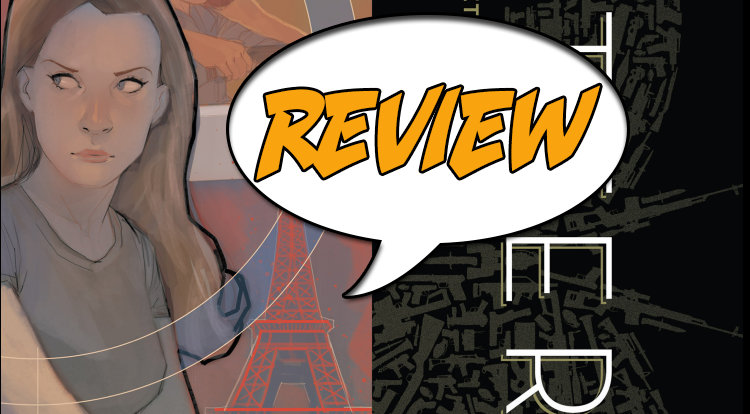 Butterfly #1 introduces readers to Rebecca, a secret agent without a father, burned immediately of all contacts following a mission going south. I KNOW THESE TROPES

I like stories of spies and secrets agents. I like stories where these spies are betrayed, burned and forced to investigate the very organization they used to work for. I’ve read/seen James Bond stories, seen the Bourne movies and read most of John Le Carré’s oeuvres. This is exactly the story Marguerite Bennett puts on the page throughout Butterfly #1 and it is inherently compelling, but it’s so familiar that I can’t say the issue was very interesting.

Butterfly #1 opens on the titular character – codename: Butterfly – Rebecca Faulkner (in Oslo, Norway), as she recalls a memory of her father teaching her to shoot. Rebecca’s father was killed some years past, establishing her identity as an orphan who sought out meaning and direction from a patriotic entity – in her case the American CIA.

Rebecca prepares herself for a retrieval, she alters her appearance and even goes so far as to bring an infant along with her to complete the disguise. During the retrieval, however, something goes very wrong and somebody important dies and Rebecca has to get out of there. She has three numbers to call in case of emergency (the last one she’s never called), and, of course, the first two numbers are out of service, forcing our protagonist to lie low and pray for rescue.

Writer Bennett uses the French language to plant a few clever hints here and there in Rebecca’s safe house and this detail was probably my favourite part of the entire issue. Taking matters into her own hands Rebecca tracks down a location she’s been given (in a different disguise this time), to a rural farmhouse in France … where she comes barrel-to-barrel with her presumed-dead father.

That is where the issue should have ended. It’s a trope-y story, but Butterfly #1 and Rebecca herself are interesting enough that I would have at least read the next issue. However, Bennett elects to take the narrative in a completely different direction and tell the father’s story of deception, rushing through 20 years of history in about 10 pages. It is at this point that we, the readers, are faced with even more tropes (I have to pretend I’m dead, hide away in a foreign country, accidentally create a new family, I’m later found out by someone from my past), and a slightly muddled timeline and about the time where I checked out.

Had Bennett focused solely on the leading lady of Butterfly #1 it would have been a great, if familiar, story, but it gets a little muddied and has done nothing to keep my interest in the final three issues of the miniseries.

WHAT A BEAUTFUL ISSUE

Butterfly #1 is a stunning issue, absolutely gorgeous. Artist Antonio Fuso has done an amazing job panel after panel in this issue. There are a limited number of lines, flat colours and squared off edges, the world of Butterfly #1 and the characters that inhabit this issue are all organized, stackable, quantifiable as if seen through Rebecca’s eyes. Everything fits together nicely, serves a purpose and, for all intents and purposes, are unthreatening.

Fuso’s work on Rebecca as an individual is breathtaking as well. Not only is she beautiful, but every time she fits into a new disguise the subtle lines of her face change forcing the reader’s brain to catch up with these little shifts as they would in real life (think about how different someone can look with a new haircut). This detail serves the overall story of Butterfly #1 by suggesting that the titular character has so mastered the art of disguise that she could easily melt into a crowd.

The best part of Butterfly #1 is the art. It’s a beautiful, beautiful issue.

THE BOTTOM LINE: LOOK AT THE PICTURES

Butterfly #1 looks good, but is a little too familiar, a little too boring. If you read it, read it for the art, treat your eyes and write the story in your head, you’ve probably seen these story beats before.

Butterfly #1 is a familiar story of a burned secret agent who must escape capture at the hands of her former employer with art that far surpasses the narrative.