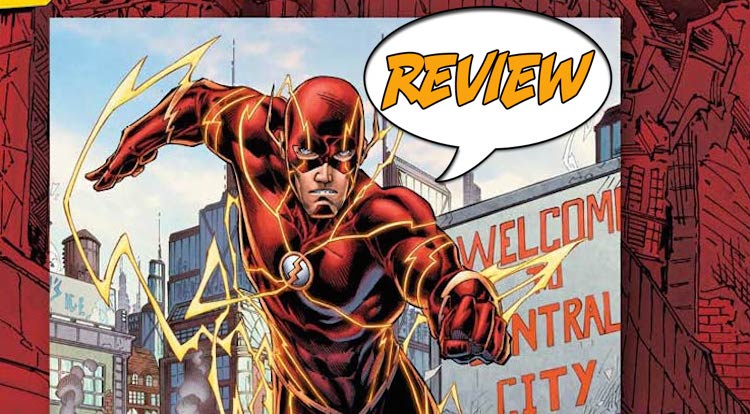 Much like the Flash, Futures End keeps chugging along with no force able to stop it.  Wally West has finally been introduced into the New 52 but without the amount of fan love I would expect.  Will he turn out to be as great a character as everyone remembers him to be?  How does he get his powers?  Major Spoilers read Flash: Futures End #1 for the answers.

Previously in Flash: Iris West has asked Barry Allen for help handling her troubled nephew Wally.  Without a father figure, Barry is tasked with the job of being one.  The two have a difficult time connecting.  Teenagers.  Then five years later…

TAKING A PAGE FROM MAN OF STEEL

Reverse Flash returns and Flash rushes away to stop him.  He’s a bit late as the Flash from the future (Blue Flash) has beaten him there.  Blue Flash ends up snapping Reverse Flash’s neck in similar fashion to Man of Steel’s Superman in order to stop Wally and Iris from dying in a car crash.  Present five years from now Flash (not confusing at all, is it?) arrives and the two fight, resulting in a giant burst of Speed Force energy.  Guess who gets hit with some of that energy?

After my experiences with some other Futures End books this month, I wasn’t expecting much.  I love the Flash and I’ve enjoyed the reintroduction of Wally West and am astonished at the negativity (especially over race), even after the anger at his exclusion from the New 52.  Robert Venditti and Van Jensen do a pretty good job at delivering an issue that gives us a look at the characters in the future.  The pace is fast, as it should be, and there were some moments that caught me off guard.  Blue Flash breaking Reverse Flash’s neck will have some fans up in arms but if you’re not used to these kinds of things from present DC characters, you haven’t been paying attention.  I’m finally happy to learn how Wally gets his powers, though it did seem brief.  The next issue of the Flash is sure to be cool as we’ll finally get to see Wally strut his stuff in his new Flash costume.

The biggest drawback is that this is a continuation of the current Flash comic rather than a stand alone.  Those who haven’t been reading won’t be horribly lost but it helps to have some previous knowledge.  Like all stories involving time travel there are problems, my biggest gripe being that the two Barry’s can touch each other and not create a paradox.  More importantly is where exactly in time this story fits, based on the Flash title and the other Futures End books that he’s appeared in.  If you can get your head around the little flaws and have been following along, you’ll enjoy this.

STRIKING WITH THE QUICKNESS

Brett Booth really impressed me with this issue.  His work is highly detailed with crisp, thin lines that help lend to the appearance of movement.  The splash page of Reverse Flash’s execution is wonderful in its layout and shocking in brutality.  As things get more hectic near the end, panels begin to spread apart and appear bent, as if time is being pulled apart.  It’s a clever idea that is done nice and subtle.  There are moments where panels are cramped with words and figures look posed rather than in motion.  It’s the hardest obstacle to overcome with a Flash book but Booth succeeds more often than not.  If you’ve been reading the Flash, then you know what to expect.

BOTTOM LINE:  YOU WANTED WALLY, HERE HE IS

Flash: Futures End #1 introduces Wally West’s Flash character in an exciting way and it’s great to finally see how he gets his powers.  The issue has some surprises that will shock and enrage some I’m sure, but I had a blast.  Readers who haven’t been playing along won’t be totally lost but it would help to have some reference before jumping in.  There is some wonderful artwork as well, making this worth a purchase.  Wally West is finally back people, so lets rejoice.

Flash: Futures End #1 is an entertaining story that introduces the Wally West Flash.