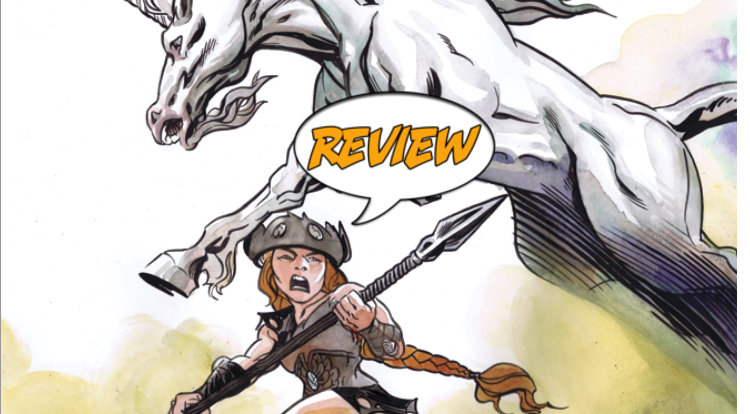 Ted Naifeh’s Princess Ugg #4 opens with the titular character dragging a unicorn with her roommate perched atop across an open field. Naifeh nails the dichotomy of being female with these two characters. Ulga is tough and strong, whereas Julifer is soft and demure – the antithesis and utter representation of the classic female paradigm. His talent as a writer speaks throughout Princess Ugg #4 as both characters display strength and the willingness to work together despite their stark difference.

The unicorn is utterly uncooperative and Julifer fears that she will lose the upcoming All Fiefdom Royal Equetition and Ulga fails to see why her roommate fails to exert her dominance over the animal (and may or may not have a fever dream about trussing up the unicorn and roasting it on a spit). However, when the animal escapes the barn leaving Julifer at a loss for the upcoming competition, Princess Ulga is the only one to do something about it.

In fact, Princess Ulga does so well that the unicorn cowers away from Julifer leaving the girls of Princess Ugg #4 right back where they started. Fear not, Naifeh has another act of selflessness on Ulga’s behalf ready in the chamber. She turns down the opportunity to return to her father’s kingdom and participate in an oncoming war in order to complete her quest at princess school. By way of a second apology, Ulga offers Julifer the use of her own pony who is, admittedly and unsurprisingly, scraggly, but feisty and talented a lot like the title character of this issue.

Princess Ugg #4 closes with the All Fiefdom Royal Equitition and Julifer’s effort riding on Ulga’s pony. Naifeh has both girls apologize (though on in so many words), and begins to express their appreciation of each other. This tenuous friendship (perhaps understanding is the better word), is a rich cave to be mined in coming issues.

Princess Ugg #4 is a great issue with a cast of character (written by a man), who aptly represent the female condition and struggles of growing up a girl even in the modern day. Plus, it’s entertaining as all get out.

Ted Naifeh does double duty on Princess Ugg #4 and he brings a stunning, classic story book art to the pages of this issue. It is painterly and colourful, perfectly setting up the fantasy world these girls inhabit. The castle and the school grounds are vast and enhance the story in every way possible.

Princess Ulga is as brawny as any superhero in a cape and tights book and it’s fun to have her be the literal representation of the “strong leading female” of Princess Ugg #4. That being said, when she’s hiding in the depths of her furry hat behind her braids she is beautifully shy – a dichotomy in and of herself as much as her relationship with Julifer illustrates opposition.

As one would expect, Julifer and the other princesses are lovely and waifish with Julifer herself hilariously in contrast to Ulga’s pony as she competes in the All Fiefdom Royal Equitition. Naifeh’s characters are all stunning in their own right and stand up gloriously against their grand backdrops and when these two artistic layers merge together they seal the whimsy and magic of Princess Ugg #4.

Princess Ugg#4 is an amazing fantasy issue, a great looking comic and a cool story that stars a bunch of girls learning to work together and maybe truss up a unicorn in the meantime! Ted Naifeh has put out a stellar issue this week and you ought to read it.

A beautifully rendered fantasty issue in which Princesses Ulga and Julifer learn how to work together and appreciate each other despite their obvious differences.