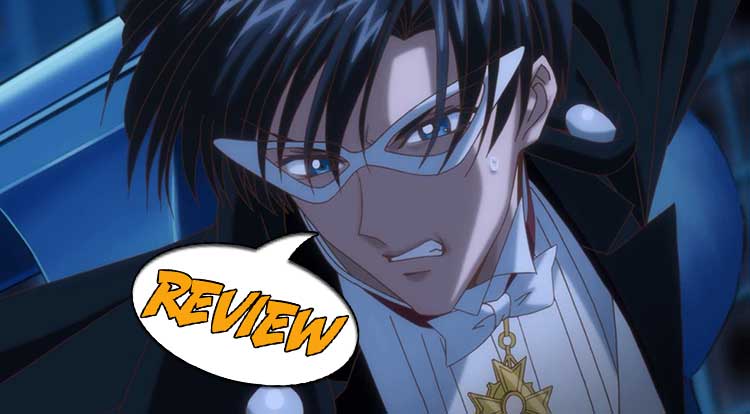 Previously on Sailor Moon Crystal: Makoto Kino, also known as Sailor Jupiter, has officially taken her place with Sailor Moon and her other allies. With four guardians total found, Luna gives Sailor Moon a crescent wand called the Moon Stick, and is told it is time for her to take her place as leader of the Sailor Guardians.

WHERE IS THE LEGENDARY SILVER CRYSTAL?

Everyone seems to be looking for the Silver Crystal nowadays… literally. Having exhausted his current resources, Tuxedo Mask decides to take a bold move in his own search in alerting the general public. He says that he’s committed crimes recently in his efforts to find it, and soon it’s all anyone can talk about. The Sailor Guardians and Luna are suspicious, of course, and Usagi is torn upon hearing this news with her feelings for Tuxedo Mask getting stronger every day.

The Dark Kingdom sees an opportunity to exploit the media buzz for their own gains. It turns it into an outright panic after Zoisite hypnotizes the population of Tokyo to look for the Silver Crystal, and when that plan fails, steals of all of their energy. Sailor Mercury, Mars and Jupiter go to intercept, but will need Sailor Moon to turn the tide of the battle. Meanwhile, Usagi struggles to discover why she’s even a Guardian, and what sort of skill she can contribute to the fight, as she feels inferior to her friends’ abilities.

The episode’s plot was lifted from the manga, which has been the standard so far. There has been revision to bring the content down to 25 minutes, and then from that point, there may or may not be more revision for new content. It’s depended on the episode so far, and in this episode, the big revision who’s there when Luna reveals her headquarters, and what immediately follows. This contrasts to the manga when Ami was the only one there. Having the entire team there to discover the headquarters doesn’t bother me – what bothers me is Usagi leaving her team behind because she’s upset about what they’re saying about Tuxedo Mask.

In the manga, the girls were off going about their business when the huge energy drain hit, and Sailor Mercury, Mars and Jupiter happened to meet up sooner to take on Zoisite. Usagi, after she almost collapses and Tuxedo Mask saves her, is critical of the current events and questions him about his involvement, even if he’s still making her feel butterflies. Usagi is visibly getting tougher as the story goes on, and I felt that this change robs her of that important character moment.

Sticking closer to the manga also means there’s more tech. I think it’s an interesting spin on the “magical girl” when there’s so much tech involved too. The Sailor V game is obviously more than it seems, and I really think that Sailor Moon Crystal is doing here where it was difficult to illustrate as a comic.

Opposite of this is when either Mamoru or Usagi dream, and they see someone who they think they know and who we know is obviously the other person. But, dreams often don’t make sense, and I think it is difficult to illustrate or animate that dream ability for you to know that someone is supposed to be there but not remember at all what they look like. But I don’t see this as a failure in Sailor Moon Crystal, as more of something that is difficult to do anyways.

The animation remains consistent, in my opinion. Its hard to tell if I’m in the minority or not in liking the animation, as it has a lot of critics, but I still maintain that it looks great while moving. Yes I’d rather linger on a manga image than a screencap, but that was true for the original anime too.

Sailor Moon Crystal continues to evolve into its own thing, and throwing in bits of foreshadowing for the longtime fans throughout each episode. This episode is not a good jumping-on-point, but is still important, and I enjoyed it very much. I still recommend that people with any interest in it start from episode 1 and work their way forward; you’ll be glad you did. I give this episode of Sailor Moon Crystal 2.5 out of 5 stars.

This episode is not a good jumping-on-point, but is still important.