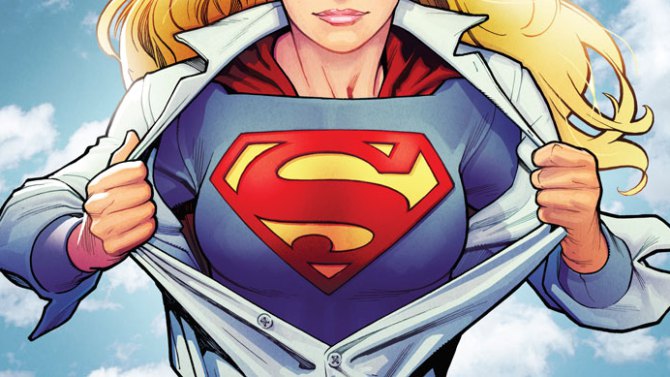 By Stephen Schleicher on September 21, 2014 3 Comments

Here’s something we’ve been waiting for – a Supergirl television series!

Warner Bros. has really been dominating the television market with its super hero properties.  It started with Smallville, and since then we have Arrow, The Flash, Constantine, iZombie, and Gotham.  Just around the corner is a Teen Titans pilot for TNT, and Lucifer as a pilot for Fox. On Friday we learned that CBS has given a series commitment for Supergirl.

Supergirl,” which is based on characters from DC Comics, comes from Berlanti Productions in association with Warner Bros. Television and is exec produced by [Greg] Berlanti, [Ali] Adler and Sarah Schechter. It’s based on the story of Kara Zor-El, who, like her famous cousin, escaped Krypton amid its destruction. She’s been keeping her powers a secret since arriving on Earth, but now — at age 24 — she decides to embrace her superhuman abilities and be the hero she was always meant to be.

Rumor of this series has been floating around since the beginning of the month, but now that CBS has pulled the trigger and given it the okay, I hope this series moves quickly and we see it sooner, rather than later.  If CBS really wanted to get the jump on other networks, they’d consider getting this on the air over the summer. In the past CBS dominated summer programming with Big Brother and The Amazing Race, and a well done Supergirl series kicking off in the summer and continuing into the fall would put the other networks to shame.

Regardless of the release date, let’s hope Warner Bros. learned their lesson with the failed Wonder Woman series.