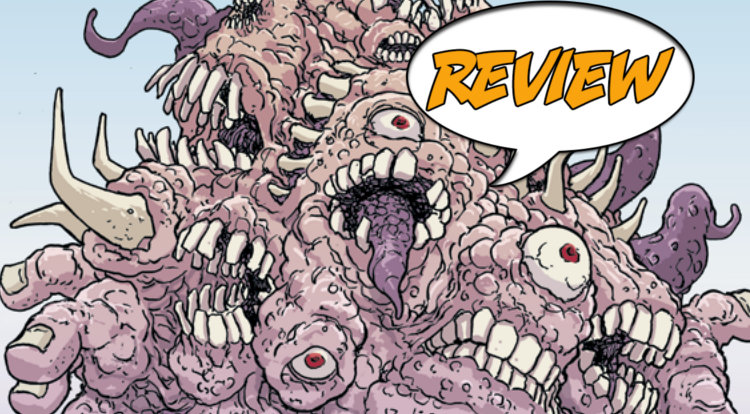 The Life After #3 Review

In The Life After #3 readers glimpse the creation of our world and the inception of Christ at the “hands” of a potato. Joshua Hale Fialkov opens the Life After #3 with a deliciously irreverent telling of the creation of the universe and the world as we know it. God, as he/she/it appears in the Life After #3 is an omnipotent potato, for lack of a better description, and in no way resembles, speaks nor acts like any deity I’ve ever come across. It’s amazing! As this unquantifiable entity meets Mary and witnesses the events following the death of Jesus it grows increasingly disappointed to the point of apathy, where we meet up with it in the narrative’s present timeline.

Fialkov notes the time of Christ’s conception with two different years, allowing readers of the Life After #3 to place this event along their own timeline whether it be from a more creationist or evolutionary point of view and it is, frankly, astonishing. The weird, controlled world that protagonist Jude inhabits within the issue is an attempt at control and oppression whereas readers are welcome to think and interpret the story through their own lens. The contrast is as ironic as it is intriguing.

The Life After #3 picks up with Jude and Hemmingway arguing about the merits of waking up the other purgatory walkers among them. I love the dynamic between these two leading men. Jude speaks in every way like a modern, slightly disconnected man with Hemmingway’s speech full of passion and callbacks to the greatest events of his waking life. Even though much of the dialogue is still expository at this point in the story arch, Fialkov’s talent for bestowing unique voices upon his characters saves it from coming across as either dull or potentially condescending. Hemmingway, in particular, is always very snappy.

The evil bureaucrats running the purgatory of the Life After #3 (with implicit connections to Satan), unleash the Seraphim upon Jude and Hemmingway and they are certainly a far cry from the benevolent, fat, baby angels of the Botticelli era. The Seraphim, for how alien – and I mean alien – they are feel much more like avenging angels out of Dante than anything else as they force Jude and Hemmingway below ground to make even more horrific discoveries about the structure of this world they populate … speaking of Dante.

The Life After #3 is very nearly too smart for its own good. Fialkov has layered familiar Judeo-Christian and literary references on top of a really cool comic adventure story.

Gabo’s art throughout the Life After #3 is stylized and crazy as readers of the series has come to suspect. The surprising thing about this issue in particular is how genuinely beautiful the first three pages that depict the creation of the universe are. They are largely bereft of dialogue and so densely coloured, which lends to the feeling of scale that you would suspect for the conception of space, time and all things.

… that being said, when God first appears he/she/it starkly resembles the male genitalia and I wasn’t so much into that.

The rest of the issue is skillfully handled by Gabo, the colouring masterfully executed as the sun rises over purgatory even as circumstances for Jude and Hemmingway get worse. It’s a really, really good looking issue.

The Life After #3 is smart and incredibly well-executed. You should read it. The issue is accepting of whatever you want to think and believe, so why not give it the chance to entertain you?

An extremely entertaining and beautiful retelling of the creation of our universe that is sure to delight readers of the series.