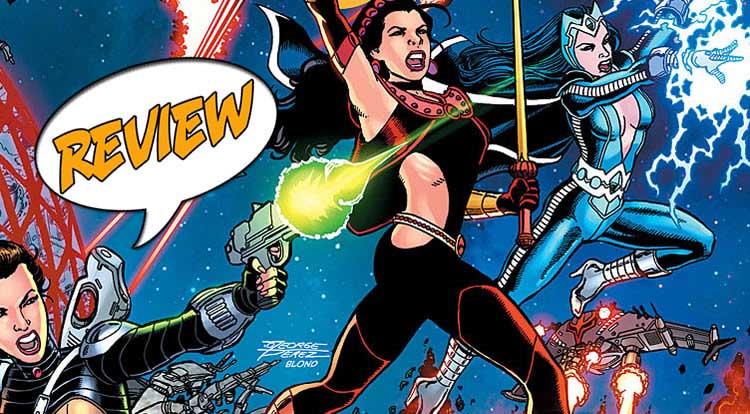 What happens when you mix science fiction, my favorite comics artist and a company willing to let it all happen the way it should? You get George Perez’s Sirens #1, that’s what!

Previously in GEORGE PEREZ’S SIRENS:  “As an intergalactic force enslaves planets across the galaxy, the legendary team known only as the Sirens must reunite to save the galaxy—but is that even possible when the Sirens themselves don’t even remember who they are? And the rest of the universe only remembers them as … villains? A six-issue miniseries featuring your new favorite comic book team, written and drawn by the master himself, George Pérez (Wonder Woman, JLA Vs. Avengers) begins his greatest story yet.”

Since comics tend to sell to males, it’s not surprising that many of the characters in them are guys. In the past, comics sold mostly to teen-aged boys, so main heroes were likely to be in their 20s to early 30s. When women or girls showed up, they often were portrayed as, what I like to refer as, “ugly men.” They just didn’t look feminine at all.

I was particularly intrigued when I read about Bruce Timm and the creators of Batman: The Animated Series getting lessons on how to draw women from, of all things, a woman! Imagine that! Batgirl, Wonder Woman and the rest looked a LOT more like women after that took place.

However, there’s always been one artist who really “gets” the female figure, and that is my all-time favorite comics artist, Mr. George Perez.

I’ve yet to see him draw a woman who didn’t look female! And this book is no exception.

WHY GO TO BOOM! STUDIOS?

Of course, Mr. Perez is best known for his work at Marvel (Avengers) and DC (Justice League) and even when those two teams joined together in a spectacular miniseries. But times and circumstances have changed.

In the past, Perez was kind of on the stocky side, fighting the calories. Apparently, that didn’t help his blood sugar levels very much because he came down with Type 2 Diabetes, which requires a lot of management. (I can speak to that because I’m in that same category or near it in pre-Type 2 Diabetes.)

If you see a photo of Mr. Perez now, he’s a lot slimmer than in those previous days. But his art hasn’t let up a bit!

My understanding is that he signed up with BOOM! Studios because they were willing to sign him to an exclusive contract, and that often means getting health insurance with your salary. Anyone with T2 Diabetes will find that extremely attractive.

Not only that, but BOOM! has a long-earned reputation for taking chances, for letting creators tell the stories they want to tell. I’m sure that was also very attractive to Mr. Perez. I imagine sometime in the future, he’ll go back to drawing Superman, Batman, Spider-Man and Captain America, but for now, he gets to have his creative juices flowing while taking care of himself. That’s a good deal to a long-time fan like me!

Of course, this isn’t Perez’s first comics featuring a lady lead character. He did Crimson Plague some time ago, for instance. Not only that, he often uses real-life women as models for the characters he draws, so that likely ensures that they will not resemble each other.

I always remember when Perez and Wolfman did the amazing New Teen Titans, and they had a “real-life” back-up in which George told the DC editors that whatever Marv did, “I’ll make it work!” Plotting is a strength of Mr. Perez, and his ability to dialogue has clearly improved over the years.

This first issue starts out with the Sirens needing to be collected from various time periods in order to come together as a team again. We see Perez’s ability to draw aliens shine, like a lizard-like one, to a variety of situations across history. As usual, Perez spares no line strokes to make it pop off the page.

BOTTOM LINE: A Comics Great on His Own Works Extremely Well!

The most disappointing thing when I heard about this book was that it will only be a six-issue miniseries. I wanted it to be an ongoing title! However, in the past, Mr. Perez has had some trouble with deadlines, so maybe this is the smart way to go. If it takes off really well, we could get another miniseries soon after this one concludes!

If you are a big Perez fan like I am, or this is the first time you’ve encountered his work, or even somewhere in between, be sure to give this a try! You may just fall in love with his creative genius the way I have!

I’ll tell a quick story about a time I met Mr. Perez at a convention. I had bought a bunch of black-and-white plates of covers he had done for a series of Batman family book covers in which Robin was being re-introduced. They were gorgeous! As we was signing them, I had to ask where the inspiration came for having these sparkles shine off a piece of metal or two. He just shrugged his shoulders and said, “I don’t know. I just thought they’d look great there.”

A great kick-off for a new miniseries!

An excellent start for one of comics' best artist/writers!