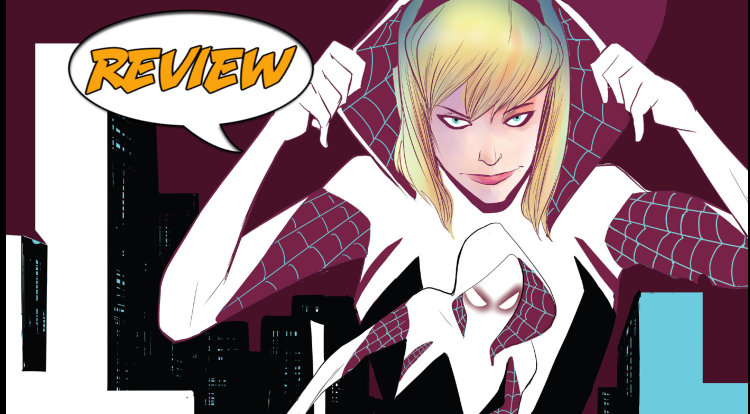 Edge of Spider-Verse #2 takes place in a world where Gwen Stacy was bitten by a radioactive spider and became Spider-Woman and Peter Parker died. I’ve always wanted more Gwen Stacy in my life. She’s an interesting character who gets almost a single story retold ad nauseum. In Edge of Spider-Verse #2 writer Jason Latour presents us with the same beautiful, articulate blonde girl, but here she received the radioactive bite and has taken up the mantle. In a mirror-plot point, Peter is the one who died, leaving Gwen to be chased by her father and come to terms with the adage Spider-Man fans are very familiar with: with great power comes great responsibility in a really fantastic issue.

Edge of Spider-Verse #2 opens with The Mary Janes rehearsing for their biggest gig yet. As one would expect, MJ Watson is the front woman and Gwen is on drums (carrying on the theme of Gwen being something of a wallflower). Our heroine is distracted, lost in the memory of her horrific legacy to date as Spider-Woman.

Latour has written a Peter-Parker-mopes-around-New-York-feeling-guilty story, but covered it up with Gwen Stacy and while that may not, at first, seem like the most compelling story, it really, really is. The little details (Captain Stacy’s fixation on capturing Spider-Woman, Jameson’s celebration of Peter Parker’s life and legacy), are certain to delight long-term Spider-Man fans. Even the quip-y scene where Spider-Woman is confronted by a bumbling cop and forced to disarm him brought a smile to my face. Yes, perhaps that is me viewing a female character through the lens of a young, female reader seeking out representation, but I truly believe it speaks to Gwen’s strength as a compelling character and Latour’s ability to tap into the details of a Spider-Man story and incorporate them into Edge of Spider-Verse #2.

The issue has some fun cameos from other popular Marvel characters as well, notably Matt Murdock as the King Pin. (yeah, read that sentence again) It ends with on a nice emotional note, bringing to mind an analogue relationship for Peter and Uncle Ben.

Overall, it’s a solid Spider-Man issue except it stars Gwen Stacy as Spider-Woman. That details brings freshness to Edge of Spider-Verse #2 and is certainly something that makes it amazing.

Artist Robbi Rodriguez and colourist Rico Renzi have put the best Spider-Man costume on the page since Miles Morales’ Ultimate Spider-Man debut and they’ve slapped it on a girl! The hood is a neat choice instead of baring Gwen’s legendary blonde locks and despite the fact that the webbing design in the hood lining is utterly impractical, it looks way cool.

Perhaps the idea of dressing Spider-Woman up in white is supposed to suggest a level of purity in a young woman or perhaps it was conceived in stark opposition to the aforementioned Ultimate Spider-Man suit, but for whatever reason it veritably leaps off the page and really helps the reader to separate Gwen Stacy the 20-something musician from Gwen Stacy Spider-Woman, even as her two personas race closer and closer to each other in Edge of Spider-Verse #2.

Lastly, Rodriguez gets a lot of my respect for giving Spider-Woman sneakers. It’s nice to see a superheroine who is not only fully clothed, visually stunning and practically attired. Well done.

Even if tie-ins and big event books are not your thing, it really is worth your while to pick up Edge of Spider-Verse #2. It is a refreshingly familiar look at Gwen Stacy and the Spider Mantle, it’s beautiful and it’s only 22 pages.

A great issue with a familiar character who breathes life into familiar Spider-Man tropes.