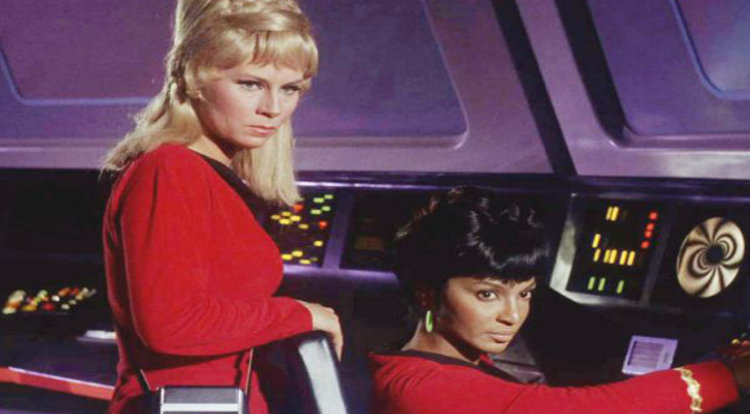 From it’s inception the Star Trek franchise has always had a focus on representation (at least of the human race), with characters written in the spirit of working togehter toward the greater good to build the brightest possible future in the darkness of space. Starfleet is a “peacekeeping armada” with a slough of amazing female characters.

Here are my top five from any and all official canon Star Trek casts. The Borg Queen is hands down one of the most frightening characters in the Star Trek canon. She not only single-handedly presents a threat across multiple series, but she is the leader of the entire Borg race (or army, if you prefer to think about it that way), which easily stands up as one of the most truly threatening enemies of the Federation.

The Borg Queen has interactions with two different captains (Picard and Janeway), and additionally, represents everything that Star Trek stands against: assimilation, group think, captivity. Her appearance is striking – and maybe a bit seductive in the right lighting – enough to make the hair on the back of anyone’s neck stands up.

On the criteria of being instantly recognizable, earnestly threatening and having staying power across multiple incarnations of Star Trek, the Borg Queen makes the list. Guinan, the El-Aurian, the listener holds a unique position aboard the starship Enterprise that is held by no other character in any Star Trek series. Guinan is the only character that everybody else trusts implicitly. Her position as bartender certainly opens her up to that – although Deep Space Nine’s Quark does not inspire the same level of candor from his patrons – but the suffering she has undergone at the hands of the Borg makes Guinan an instant sympathetic ear and sage advice she dispenses proves invaluable to many crewmembers (Captain Picard, Doctor Crusher and Georgi LaForge, come to mind).

Guinan also has abilities and knowledge of the Q that put her on a power level beyond that of her occupational station and the calm demeanor with which she faces all situations. Throughout the Next Generation as her character grows and makes more appearances there are mounting implications that she is an entity closer to goddess-like status than anything else.

For being the character universally trusted with the intimate thoughts and fears of her shipmates and the pivotal role she plays in a limited number of appearances, Guinan makes the list. Played by: Jolene Blalock
Which series you know her from: Enterprise

T’Pol, the first Vulcan serving on board a starship, personifies many of the main themes of Star Trek: acceptance, change, learning to work with alien species. Throughout the four seasons of Enterprise she goes from being coldly detached from her human crewmates to developing deep personal relationships with many of them (Captain Archer and Trip, most notably).

T’Pol is in the unique position of being the Enterprise’s science officer, making her one of the most valuable senior officers on board, a powerful rank, in addition to being the first officer, to give to a female cast member. This puts T’Pol in a place of being a higher ranking officer than almost every male crewmember on board paired with her own emotional growth that keeps her from devolving into a tyrant.

For embodying the spirit of growth and togetherness inherent to Star Trek in her own development throughout Enterprise T’Pol makes the list. Played by: Nana Visitor
Which series you know her from: Deep Space Nine

Major Kira Nerys is the best representation of heart in the Star Trek universe; a former rebel who fought against the Cardassian occupation of Bajor before being assigned to Deep Space Nine as the first officer. Much like T’Pol, Major Kira is in a unique position of power over many of her male crewmembers and the first female first officer to have been a regular player in a Star Trek series. She is often at odds with her commanding officer, Benjamin Sisko, although the respect between them is paramount and she has a very polarized view of the universe as she understands it.

Throughout Deep Space Nine Kira is steadfast and never waivers from what she holds dearest in her heart (which is not to say that she does not undergo character development), but she is tough to her core – one of the toughest characters in Star Trek – and her passionate convictions allow many of her crewmates to find their own inner strength where they feared there had been none. (again, see: Sisko)

For the strength of her convictions and her ability to guide others to their paths, Kira Nerys definitely makes the list.

Played by: Nichelle Nichols and Zoe Saldana
Which series you know her from: The Original Series, TOS Movies, The Animated Series, J.J. Abrams’ Star Trek Movies

It has to be Nyota Uhura in the #1 spot for being the original bad ass lady of Star Trek: The Original Series! Uhura is the most important woman on the crew of Kirk’s Enterprise. She uses her brain above all other things as the chief communications officer, her [xeno]linguistic abilities allow the Enterprise crew to communicate in relative comfort with alien species before the advent of universal translators.

Uhura (in both her portrayals), is aware of male Starfleet officers’ attraction to her and rather than allowing herself to be demeaned by that she is able to use that to her advantage, she doesn’t stand for it when other characters (Kirk and Spock, notably), try to put her in a corner because she knows the assets she brings to a starship crew.

For being a role model for generations, smart as a whip and determined to make herself useful, Nyota Uhura top this list.