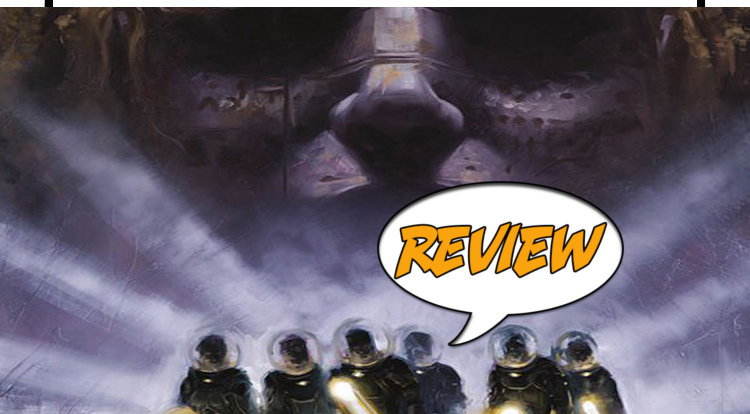 Prometheus: Fire and Stone #1 takes a lot of notes from a movie script that didn’t resonate with most audience members.

A LOT OF EXPOSITION AND A FAMILIAR PLOT

Remember when they made a prequel to Alien called Prometheus and nobody liked it, but Fassbender was fun to watch? Evidently, that level of apathy requires a comic book series! Initially, I was excited to see Paul Tobin on writing duty (I love his work on Bandette), but Prometheus: Fire and Stone #1 drowns in so much exposition and pseudo-science nonsense that it is difficult to tell of Tobin was able to do any actual writing.

The first three pages of Prometheus: Fire and Stone #1 involves a probe crash landing on a planet, lots of scientific fact being spewed out to a listening audience of none that most readers are unlikely to be able to make heads or tails of. For the proceeding 10 pages we meet the crew of the command ship Helios. A young, attractive woman (who really resembles Noomi Rapace as Elizabeth Shaw in Prometheus), named Cara has woken from cryo early in order to record a 10 page vlog on the floating metallic ball that Luke Skywalker trained with in A New Hope and just dump information on the readers.

It’s very dry and very boring and the only reason I pressed on was for the purpose of this review. Non-miraculously and with sad predictability, Helios (and the two other ships traveling with it), and, therefore, the pages of Prometheus: Fire and Stone #1 is populated by exact duplicates of the crew from Prometheus the movie, though something of a different race and all with different names – but everybody’s there. Given the lukewarm reception of the movie in the first place, this seems like a strange choice.

Moving on, 14 pages into Prometheus: Fire and Stone #1 the crew finally touches down and goes exploring on a jungle planet. Of course, they meet a tiny creature that looks harmless and we get a near reenactment of the scene with the water creature that ate people’s faces from Prometheus, there’s a lot more techno-babble shouting by characters who all speak the same and lack in diversifying traits until they stumble upon a killing field, some weird looking ants and take a biological sample to bring back to ship in a move that you just know is going to go south.

Prometheus: Fire and Stone #1 closes with an image that beats the reader over the head with the fact that this story exists in the Alien franchise universe, much like the appearance of the xenomorph on Prometheus, the movie.

I can hardly fault Paul Tobin for the writing of Prometheus: Fire and Stone #1 because the issues smacks of a writer struggling to jab every piece of information editors had given him into this first issue or else. The result is dry and uninteresting to its detriment.

THE ART IS GREY

Juan Ferreyra on art duties for Prometheus: Fire and Stone #1 is fine. Most of the character wear the same face, they’re pretty unremarkable, the ships and the planet that are visited throughout the issues are of the generic sci-fi design. They lack enough distinction to truly be remarkable … save for how much they resemble some cast members of the film.

Prometheus: Fire and Stone #1 is grey, which is likely supposed to reflect the dangerous, cool, detached nature of Weyland, but it feel a bit lazy and, again, generically science fiction.

Much like Tobin’s writing, there’s not a lot to say about Ferreyra and Prometheus: Fire and Stone #1. The coolest thing that happens, artistically, is we see a poster of David on the wall (Fassbender strikes again!)

THE BOTTOM LINE: I DON’T KNOW WHO THIS IS FOR

At $3.50 a dry issue with lack luster art isn’t for any reader that I can imagine and I don’t know if the titular film – or even the Alien franchise – has enough of a following that would really get anything out of Prometheus: Fire and Stone #1, sadly.

Prometheus: Fire and Stone #1 gets bogged down in exposition and is further plagued by characters and plot that are copied from the movie.