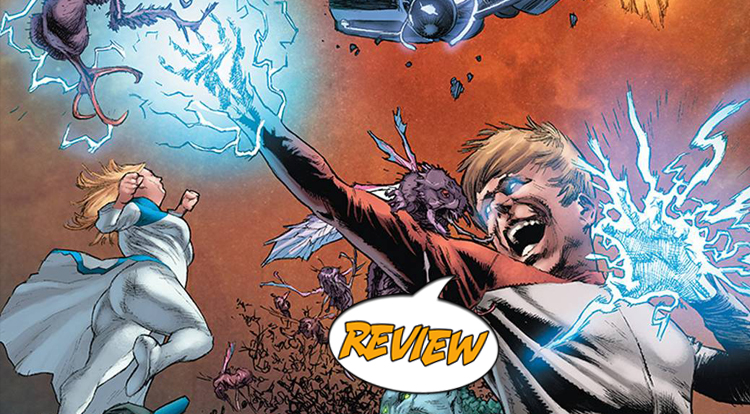 Mexico City is gone, and the Armor Hunters have run rampant across the Earth.  Can the young psiots (aka harbingers) known as Generation Zero pull off a win, or are they doomed as well?  Your Major Spoilers review of Armor Hunters – Harbinger #3 awaits!

Previously in Armor Hunters – Harbinger:  The teenage army known as Generation Zero has made their way to Mexico City to help with cleanup after a massive bomb destroyed the city, only to encounter Faith and Torque, late of Harbinger.  At the epicenter of the destruction, they have discovered a pregnant woman who was shielded by a powerful force field, seeming created by her unborn child, but even that small grace won’t save them, as they’ve discovered the subway of what was Mexico City are full of strange alien eggs of unknown origin.  Now that the eggs have hatched, our heroes have a massive swarm of monstrous bug-things to deal with, or Los Angeles falls next…

We open with our kid heroes in full-on panic mode, retreating from a horde of insectoid monsters that threaten to blot out the sun, and (worst of all), the bugs want nothing more than to fly down their throats and consume their body mass to make more bugs.  It’s really gross chaos, as Cronus, the leader of Generation Zero tries to keep his team alive.  I’m a few issues behind on my reading of Harbinger, so I’m not sure how Faith and Torque got in this issue, but I find myself really enjoying their interactions in the midst of their own panic.  (Apparently, Faith really, REALLY hates bugs.)  The biggest complaint that I have with this issue is the sheer number of characters in play, all of whom have very generic code-names, making for some confusion over who is whom, even having read the previous two chapters.  The key to undermining the creatures seems to be the activated psiot mother from Mexico City, but it turns out to be a red herring, as she spends the whole issue in a coma while the kids of Gen Zero fight a seemingly unbeatable foe.  Through clever use of a couple of their super-powers at once, they prevail, and the issue ends with a celebration of the connections and ties that bind us all together, be it as family, as lovers or something else.  The issue also promises that Generation Zero will return, presumably in their own series or mini, which makes me wonder why this book would be called AH: Harbinger and not AH: Generation Zero.

There’s a lot of “POW! ZAP! BANG!” in this issue, and some really horrifying stuff when a couple of our main characters have alien deathbugs graphically flying down their throats.  Indeed, one character, Cloud, spends most of the issue down and out, begging them to kill her, as she can feel the creature eating her and laying eggs in her body.  *shudder*  It’s some disturbing stuff on that level, although a slight cartoony aspect to the art helps to blunt it somewhat.  Nobody really gets a lot of character-defining time, though, save for team leader Cronus, whose monologue on belonging closes up the issue in appropriate (albeit somewhat obvious) fashion.  Because of this being a crossover part of a bigger ongoing story, featuring the trial run of a new super-team that Valiant clearly wants to give their own time in the sun, it’s a little bit sketchy as a single-issue story, and the pacing of the series makes this one all climax without a whole lot of closure.  Still, there’s great fun to be had with a teenage super-team, and there are some interesting notions revolving around Generation Zero, once you get past their “government-created monsters” back story.

It ends up being an okay issue, and perhaps one that holds the key to the overarching conflict of Armor Wars in the form of the unkillable lady (though I don’t know for certain if that’s the case without reading more books, I’ll wager) and at least delivers some effective horror and battle sequences.  Armor Wars – Harbinger #3 isn’t exactly what the title promises, but isn’t bad by any means, just somewhat expected, earning 3 out of 5 stars overall.  It has at least made me want to read up on my Harbinger to find out how Torque and Faith got where they are, which is a kind of success in itself…

An interesting, but somewhat run-of-the-mill take on teenage super-heroes and big ol' disasters and such.