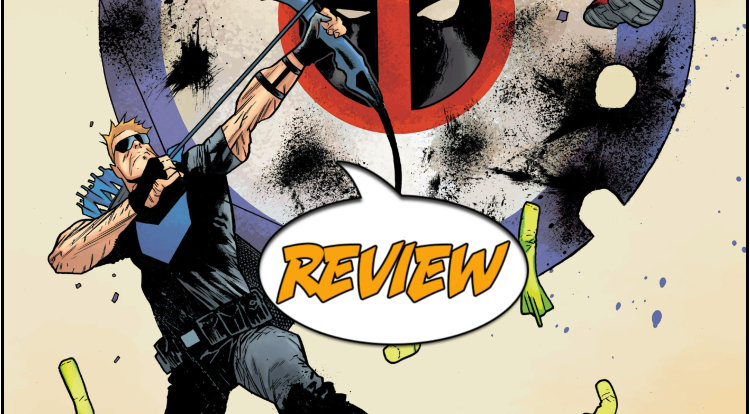 Hawkeye vs Deadpool #0 is a surprisingly fun issue that presents the titular characters as alternately team members and rival during the events of a Hallowe’en night. I don’t like Deadpool. I rarely liked him in what was considered his hay-day back around the time of his initial conception. Possibly because I’m a female and it never tapped into that teenaged boy element inside of me, but I do like Hawkeye, so I decided to give Hawkeye vs Deadpool #0 a chance.

It is wildly fun! Deadpool scribe Gerry Duggan does a great job of meshing his narrative tone with Matt Fraction’s self-effacing voice of Clint Barton so many readers are familiar with from the Hawkeye run. Clint in handing out Hallowe’en candy and Wade is escorting Emily Preston and her children (including his own daughter), strange roles for each of the heroes, considering. Clint can’t catch a break, his evening plagued by insults over the fact that he is handing out the standard fun-sized candy bars rather than a standard-size and, naturally, Wade has a remark or nine to make about this fact.

The events of Hawkeye vs Deadpool #0 are set into motion by a young man named Jeremy who has somehow gotten in over his head and on this fateful Hallowe’en night he seeks sanctuary at the church of Hawk-guy. Long-suffering Clint, however, is out of patience and send the young man out into the night and into the hands of a secret organization.

When gun shots are fired the titular characters of Hawkeye vs Deadpool #0 spring into action (Wade requiring a little more coercion than Clint, of course), and must battle giant, indestructible thugs dressed up like popular Marvel characters (notably Punisher and Daredevil), who Duggan later reveals to be part of a larger conspiracy, but I won’t say anymore about that. The pair are soundly beaten.

When a clue to what Jeremy was up to is discovered by Wade the violence of Hawkeye vs Deadpool #0 starts up again with a battle now between the avenging archer and the merc with a mouth that will seemingly set the precedent for the rest of this mini-series.

Writer Duggan takes a lot more cues from Fraction’s series than his own and I believe that is to the strength of Hawkeye vs Deadpool #0. It’s a surprisingly fun issue that highlights both of the leading men and their unique sense of humour, while at the same time managing to impart an impactful narrative and an interesting reveal on the fun splash page.

In Hawkeye vs Deadpool #0 artist Matteo Lolli is doing his very best David Aja impression. The layouts of the page, replete with arrow-inspired design work, lots of purples, blueprint-esque maps of a scene and an amazing use of sign-language-as-storytelling-devise-in-this-visual-medium and it is amazing to look at.

Layouts aside, that is where the similarities between Lolli and Aja’s art ends. Lolli put clean lines on the page, but without falling into the big two house style. Clint is handsome, but rendered in sparse lines compared to the work of many of his contemporaries. By contrast, Wade’s face carries many lesions with musculature lines between the patches of flesh that is as cool to look at as it is creepy.

Much like Duggan’s work on the story, Lolli brings a perfect merger of the art styles from Hawkeye and Deadpool to this issue.

Hawkeye vs Deadpool #0 is a fun issue. It takes all the best things of the two franchises it is merging and throws them together and then at each other. If you like either Clint Barton or Wade Wilson you’ll get something out of this issue, the Hallowe’en backdrop is very appropriate and may even turn out to be telling …

This issue borrows heavily in narrative and art from Fraction and Aja's Hawkeye run to its advantage and presents readers with a fun story set against a Hallowe'en night.