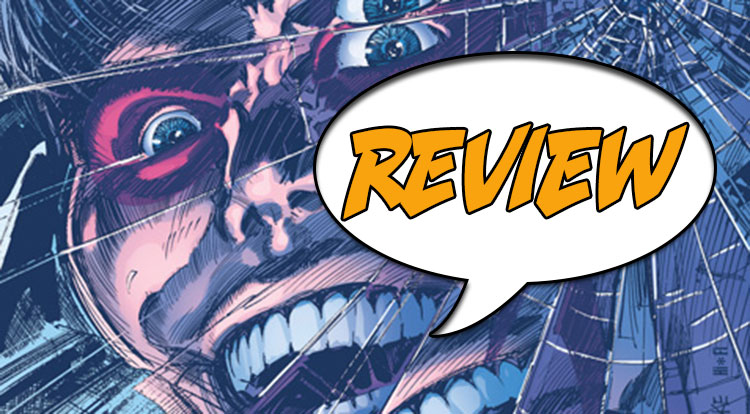 Formerly sidekick to the Red Cowl, Flyboy’s world has been torn apart by the sudden murder of his mentor and partner. To make matters worse, no one will take him seriously after the Red Cowl’s death, and the heckling has turned into hostility, leaving him a man on the edge. Julia Moonglow, one of the Cowl’s former enemies, has approached him and slowly drawn him in, revealing treachery that Flyboy never would have expected: the Red Cowl is in fact alive! With a renewed sense of purpose, the newly-anointed “Sidekick” has allied himself with Julia Moonglow and made it his mission to track down the Red Cowl for vengeance.

Previously in Sidekick: Having taken down some associates of his former partner, Barry Chase—now “Sidekick”—and Julia Moonglow have begun the process of tracking down the Red Cowl through an alliance with the villain Terrorform.

There’s something inherently intriguing about the idea that a person with an immense amount of power would leverage that power for the good of people around them or the world as a whole. It’s why we love the super hero origin and can’t escape it, even if a film franchise or comic book is being relaunched or rebooted for the umpteenth time. A writer worth his or her salt knows that if any character would step into harm’s way for another person, there needs to be a motivation or a reason behind that learned behavior. Batman works as a character because his parents were gunned down in Crime Alley; Superman works as a character because the Kents found him in that field; Spider-Man works as a character because with great power comes… well, you know.

For the same reason, a story that asks the question, “What does it take for someone, even someone we perceive to be the best of us, to really go bad?” grabs our attention. That’s the hook that compelled me to check out Sidekick #8, even though I had not read any of the previous issues.

The “Previously…” page was informative enough to allow me to dive right into the issue, which begins with Barry Chase (formerly the sidekick Flyboy) configuring programs that belonged to his old partner the Red Cowl. He tells Julia Moonglow, former enemy of the Cowl and Barry’s new ally/lover, that he is attempting to trace the money that his old partner moved around in off-shore accounts before faking his death. Since the programs will take a while to do their work, Julia flies the couple from their hideout to Las Vegas for a night on the town. Meanwhile, Thomas Winchester, formerly the Red Cowl, discovers from his new home in an unnamed, tropical location that someone has “pinged” one of his dormant accounts, which launches into several pages of flashback. Thomas is with the financial advisor who is helping him to hide his money, and he tells him in colorful, hateful language that Barry should be left nothing after Thomas has faked his death. He then meets with a look-a-like in the Cowl costume, who is apparently homeless and believes that he is helping the Red Cowl to take down a villain by acting as a distraction. The real Cowl promises the man that he will “never go back to that homeless shelter again” before sending him off to ride in a parade with Flyboy, who is fooled by the double. We cut to Thomas, now out of costume, assassinating the double from a distant rooftop with a rifle before fleeing the scene. He purchases a boat and sails off into the sunset, declaring, “Thomas Winchester is free.” Back in the present in Las Vegas, Barry and Julia anger a fellow high-rolling gambler at the table by their arrogance, which causes the security of the casino to run facial recognition software and identify Julia. After being approached by security, the couple decides that it’s time to introduce Sidekick to the world and go on a rampage, which makes news and catches the attention of Thomas, who has discovered that the person pinging his accounts is using his technology.

Before I go any further, it should be noted again that this is my introduction to this series; with that said, this will probably be the last time I pick up an issue of Sidekick. My primary issue, as you might have guessed, has to do with characterization and motivation. There seems to be very little nuance to any of the three main characters or their motivations. Barry appears to be defined entirely by the person he is currently in relation to. I’m guessing that this is the intent of Straczynski, that this is supposed to be a part of the de-construction of the sidekick in super hero comics, but there need to be interesting characters around Barry for it to work. Based on this issue alone, there is very little depth to either Julia or Thomas’s characters and no obvious reason for the reader to gravitate towards them. Some of the dialogue is a little painful to read, especially the moment at which the casino security confronts Julia, though the art doesn’t help to bring the cinematic moments intended by Straczynski to life (an issue which will be addressed shortly). Thomas is an entirely one-note character in this issue, and the dialogue given for him is problematic as well. When he is settling his financial affairs with his advisor and decides not to leave anything to Barry, Straczynski really plays up Thomas’s seemingly irrational hatred of Barry and drives home how much we should dislike the former Red Cowl: “Maybe my death will make him grow up a little… take responsibility for himself… be a freaking man. Hell, I don’t think he’s ever even gotten laid.” I don’t think it’s impossible to imagine a person who would be shallow enough to dislike someone because they have never had sex before, but it is almost impossible for me to imagine a scenario in which I would care to read more about that character.

Tom Mandrake’s art has some bright moments in the issue, particularly when he is drawing Julia or the Red Cowl. His more stylized, typical-superhero-comics approach to these characters when they are posed is pleasant enough to look at, and Julia is drawn very attractively at certain points in the book. From a story-telling standpoint, everything is clear, and the panel layout is successful in conveying the pace of the story.

The way that Mandrake handles motion is not as enjoyable for me because of the amount of line work that his style incorporates. When Thomas is fleeing the scene of his successful assassination from the roof, he jumps onto a different roof, and the half-page panel of his landing looks rushed and a little sloppy to me because of the immense numbers of lines. Faces and hair are not always consistent, mainly on Flyboy/Sidekick, especially in the last five or six pages as the action picks up. From page to page, the overall style of the art can change noticeably as well. In one specific instance on page 18, Julia is about to take out all of the lights in the casino and we are given a close-up on her illuminated face that looks like John Romita, Jr. art; by the next page, the art is much less stylized. Instances like this are jarring and took me out of the story.

My final complaint: the evil, villainous, scenery-chewing grin is so prevalent in this issue that it’s almost laughable. Mandrake uses it like shorthand to say, “Look how evil I am/have become!” and plasters this grin on at least one character in at least one place on five of the last eight pages. It loses any weight it might have had, almost becoming a parody of itself by the final panel of the book, and it confirms the lack of character depth displayed in the writing, in my opinion.

It could be that I’m missing some very important information that would further flesh out the Red Cowl, Sidekick, and Julia Moonglow as characters, and maybe this is the beginning of the climax that ongoing readers have been waiting for in this series. Maybe this series reads very well in the trade and when there is a little more space for development. If either of these things are the case and you have been enjoying Sidekick from the beginning, please feel free to comment on that; however, I was hoping for slightly more nuanced story-telling and characterization than what I received in Sidekick #8, so if you have not been reading it already, I would skip this issue. If the concept seems interesting or you just enjoy reading about terrible people being pretty terrible to each other, the digital version of the first issue is only 99 cents on Comixology and could be worth checking out.

Thanks to guest reviewer Tyler Howell for submitting this review.