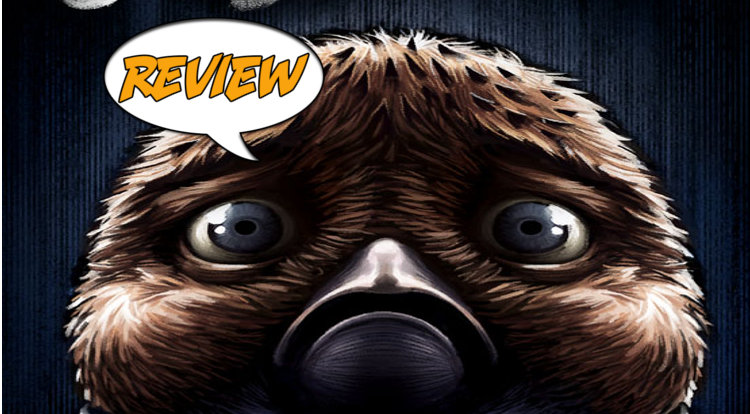 A little jaybird is fed lies by his sickly mother and never allowed outside, a Kafka-esque breakdown ensues. Jaybird HC from Finnish writer Jaako Ahonen examines the human psyche through the lens of an animal in a manner that is starkly reminiscent of Franz Kafka – notably Metamorphosis. The titular character has no name, no defining characteristics and very nearly no lines to speak out throughout this 130 page graphic novel.

The story of Jaybird HC is a classic gothic narrative. Inside a very big house, with very little light lives a very little son of a very sick mother. He is haunted by a great many things, the silence that permeates all aspect of his existence – some of the only sound throughout Jaybird HC comes from a long string that runs throughout the mansion as is adorned with bells and noisemakers of every type – the portraits of his ancestors and their great, unachievable deeds, the sickly nature of his mother and one hairy little black spider who seems to be following him. However, as presented in the pages of this OGN these things never step a finger foot into the realm of trope, rather they stand up as strong narrative choices and serve to prove why they have a literary legacy as such.

Ahonen has all of these aspects quickly compound and press harder and harder against the delicate sanity of the titular character in Jaybird HC. The hairy spider is frightening at first, as one would suspect, only to then become the shining beacon of light in the jaybird’s life. The hairy spider brings with himself (I’m presuming gender), the promise of the world outside. Of light. When the jaybird first begins to consider the notion of a world beyond himself it seems ripe with promise, however, when he brings his queries to the only source of authority in his life – his invalid mother – she coolly quashes his curiosity with tales of “Bad birds” who would wish nothing more upon them than a brutal death. The comparison in this move to the mentality of a holocaust victim is hard to miss or the close-minded fear of Mr. Craven of the classic novel The Secret Garden.

Jaybird HC continues to build taking a note from Poe’s the Telltale Heart with the jaybird unable to sleep, a panic building and swelling within him until he takes extreme measures of protection – even going so far as to plaster any windows and cracks closed – and as his downward spiral bandies to a head readers cannot help but deeply empathize with this anthropomorphized damaged young man.

Events naturally come to a head in Jaybird HC when our protagonist (he cannot he called a hero), at the non-verbal behest of his hairy spider friend travels out of doors, musket held over his shoulder and polluted sense of self and the world on brazen display. I won’t tell you what is revealed on the other side of the door, beyond the fact that it is a startling examination – a mirror up to nature, to make the Hamlet allusion – of the jaybird’s own life and perception of existence. In the end, I’m not certain if anyone has learned a lesson, but Jaybird HC, with seamless skill, presents a beautiful, tragic and true-to-life tale that could just as easily have befallen any human being as this little bird.

Ahonen uses the animal nature of his titular character masterfully – a frightened, delight creature trapped in a world of darkness and ignorance – and has put to page a story as delightful and quintessentially European as Juan Díaz Canales’s Blacksad books.

Aritst Lauri Ahonen is the brother of the writer and executes his work with no less aplomb. To harp on the Blacksad comparison, the art of Jaybird HC feels very influenced by classic Walt Disney movies (101 Dalmatians come notably to mind). The titular character cute, wide-eyed and breakable, an outward representation of his delicate mental state, which makes his descent into madness and violent all the more visually arresting throughout the graphic novel.

Ahonen crafts the world of Jaybird HC thoughtfully, even if the reader feels that they themselves would be lost in the vast wasteland of the house. Shard viewpoints are employed increasingly throughout the book that further impress upon the audience the severity of the jaybird’s mountain paranoia, often leaving us with a sense that we are the bump in the night watching this poor creature claw for answers where there are no good ones to be found.

In its startling way, Jaybird HC is absolutely gorgeous. I picked it up for the arresting cover image and was treated to a visual feast inside.

At $19.99 Jaybird HC is a sad, whimsical treat. It’s the kind of graphic novel to purchase and leave on a coffee table for others to thumb through and lose themselves in. You’ll be a bit sadder for having read it, but moved by the plight of an anthropomorphized bird who, in a better world, could have been singing outside your own window.

Jaybird HC is a story of a very scary little bird who struggles to retain his sanity whilst trapped inside a great big house with the stories of an invalid mother.