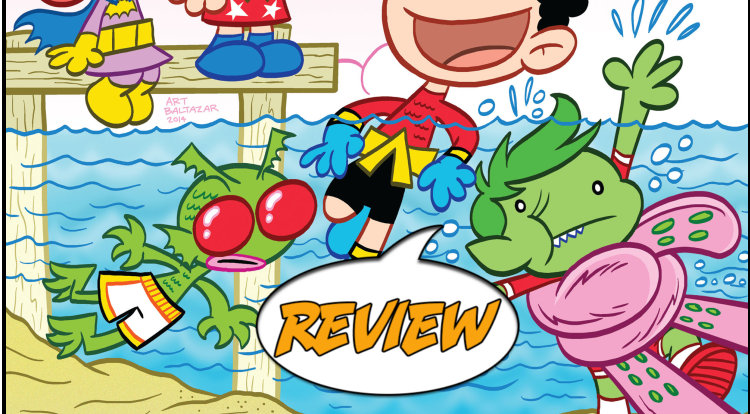 In Tiny Titans: Return to the Treehouse #4 the mini heroes take to Atlantis by way of a Lagoon to discover a treehouse that Aqualad and Lagoon Boy know is hidden there. The quest for the treehouse continues! Writers Baltazar and Franco bring some of my favourite legacy characters to the page throughout Tiny Titans: Return to the Treehouse #4 with a surprise appearance by Lagoon Boy – I mean, how many appearances by Lagoon Boy have their ever been ever? – who has the difficult job of explaining the intricate differences between and a lagoon and the actual ocean to Robin.

Tiny Titans: Return to the Treehouse #4 continues with Wonder Girl, Robin and Batgirl (with a costumer change that is totally and completely addressed), first visit Commissioner Gordon in order to make use of the Bat Sub. Gordon and Batman both get amazing cameos – a fist bump! – by the time the trio is ready to head out on their adventure proper.

The four Tiny Titans hook up with Aqualad and he leads them under the sea! There is a prevalent hope on Robin’s behalf that they will encounter Aquaman on their trek to Atlantis. Baltazar and Franco bring the curiosity and inquisitive nature that characterizes every boy who takes up the mantle of Robin and pair with the enthusiasm that we think of from Burt Ward’s portrayal of the character to their version of the Boy Wonder and he really is the lifeblood of the team. As with any Teen Titans or Young Justice story worth its weight he is effortlessly the glue between all these characters, whose personality and outburst are endlessly entertaining to the readers.

Barbara Gordon’s Batgirl is also at her best being penned by Baltazar and Franco. She’s a little more together and less overtly silly than her brother-in-arms Robin and a little less harsh than Wonder Girl. These two male writers have presented not only an awesome female character, but one in the position to be an outstanding role model to an entirely new generation of comic readers.

Baltazar and Franco continue their masterful narrative through the B-plot of Tiny Titans: Return to the Treehouse #4 which features Beast Boy, Ms. Martian and Offspring. This trio – Offspring being the boat, material which is rife for jokes – is looking to meet up with their teammates in the depths and stake their claim on this supposed underwater treehouse.

Not only have the writing team brought in some lesser known DC character, but they manage to introduce a member of the Super Pets that I know I’ve never heard of. Every aspect of Tiny Titans: Return to the Treehouse #4 has the trappings of a masterfully executed Teen Titans story with all the fun and silliness that one would expect from an all ages comic, though that being said it is no less enjoyable to an adult reader.

All you have to do is look at the cover art to know that Art Baltazar is on his A-game. He understands his story, his characters and his medium so completely that while his art is certainly stylized it is never boring or reliant on tropes.

Some high lights include: Robin walking around in snorkel and flippers, Batgirl’s updated costume to match the Cameron Stewart and Babs Tarr redesign, Aqua-Cow and Ms. Martian turning into an octopus.

Tiny Titans: Return to the Treehouse #4 is whimsical, wonderful and just downright cute. It is complementary to the point of perfection and is just a feast for the eyes. Simplistic, certainly, but nothing short of fun to look at.

I’M TELLING YOU IT’S THIS GOOD

I didn’t know that Tiny Titans was an amazing series or that Tiny Titans: Return to the Treehouse #4 would bring as much joy to my reading experience as it did. You can read it without the context of previous issues, it looks amazing and Baltazar and Franco know the characters they are working with better than some other writers working on their main titles over in the DCU proper.

Tiny Titans: Return to the Treehouse #4

Tiny Titans: Return to the Treehouse #4 is a sweet, well-crafted story full of familiar characters!