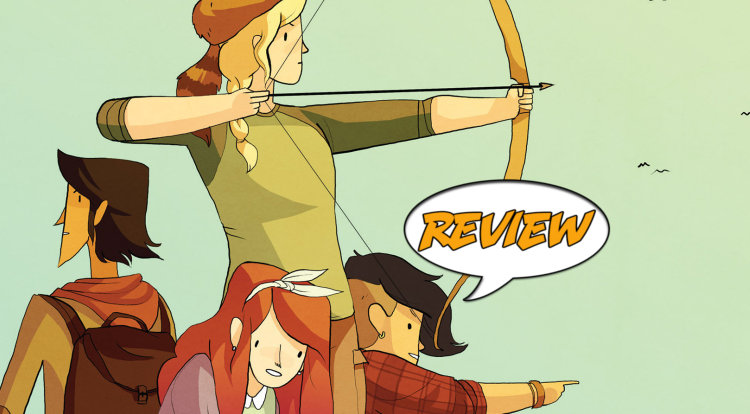 The Lumberjanes safely make it back to their campsite only to be attacked by raptors as the mysteries surrounding the camps begins to come to life. April, Molly, Mal, Jo and Ripley return to their own campsite in Lumberjanes #5 having been safely returned by their cabin leader Jen. The issue begins with Jo waking from a horrible nightmare. Readers get a quick glance inside her bag and if you’ve been following the series thus far, you’ll recognize a very sinister object resting therein.

Rosie, the werid-to-the-point-of-being-creepy leader of the camp leaves Jen in charge of the entire camp and disappears for the majority of Lumberjanes #5. Presumably, she’s gone off to face the leader of the possessed boys’ camp, but writers Stevenson and Ellis leave us with the mystery. In the meantime every girl attending the camp resigns themselves to spending the day making friendship bracelets – a tried and true camp tradition. Molly needs to go to the restroom and is paired up with a mean girl named Diane rather than Mal (so, alas, no movement this issue on the smooching front either!) …

… until the raptors attack.

Yeah! Lumberjanes #5 has a full-on raptor attack. The raptors are wearing a symbol at their neck that readers have seen throughout the series to date and is synonymous with possession and evil-doing (remember the mention of Jo above?). As with many previous issues of Lumberjanes Stevenson and Ellis use the raptor attack as an opportunity to highlight each of the girls’ individual skills: April and Mal use a combination of brain and blunt force in order to free fellow campers from the Mess Hall, Molly reveals that her Davy Crockett hat is an actual raccoon named Bubbles who fetches her new bow and arrow (yes, the comparison between Molly as an archer and the wildly popular Katniss Everdeen are unmistakable, but given how lost Molly was feeling two issues past it’s nice to see her coming into her own), which she ably employs in order to save the life of herself and Diane, Ripley saves Jen largely through dumb luck … and something mysterious happens to Jo that sets up a deeper mystery surrounding her character that is certain to carry forward into coming issues.

There are several clever references throughout Lumberjanes #5 – including a line straight out of Shakespeare – and despite having a large cast (five leads and a handful of supporting characters), each girl gets a nice moment and has character development well under way that can be plotted through the issues (except maybe Ripley).

Lumberjanes #5 is a ton of fun, as readers have come to expect, and the mystery coming to light is definitely more along the lines of Welcome to Night Vale and other Lovecraft-inspired tales, than something out of the Sherlock Holmes camp.

Much like the writing team, artist Brooke Allen is completely on-point with her work throughout Lumberjanes #5. The cartoon-y, physics-defying style Allen brings to the page really gets a chance to shine in the massive counter-raptor battle. Ripley, in particular, gets long arms and legs as she must constantly be removed from danger by Jen lest something horrible should happen to her.

Maarta Laiho on colours does a fantastic job in feeding the overall tone of fun and high-stakes that permeates Lumberjanes #5. Most everything is a primary colour speaking to the girls’ youth, but also the supernatural elements (should I bring up the possessed raptors again?), seen throughout the issue.

Lumberjanes #5 rocks. It presents a diverse group of young women who must grow in different ways and work together told in the most charming way possible. Plus, there are raptors, guys!

Lumberjanes #5 is an excellent adventure story full of girls filled with raptors and character growth.