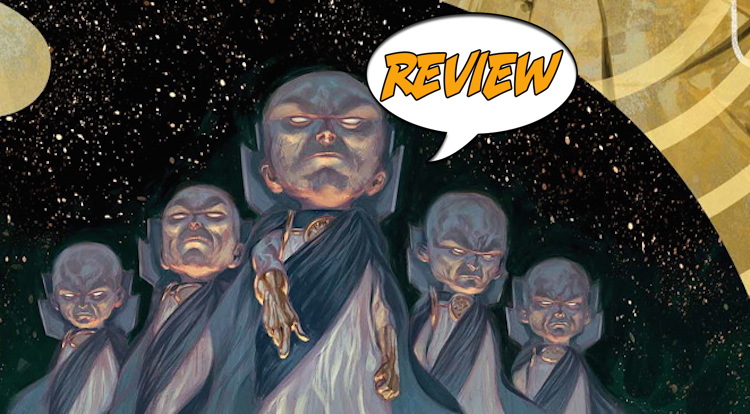 The final judgement is here! What does that mean?  It means Major Spoilers has your review of Original Sin #8! Previously in Original Sin: The Watcher was murdered and his eyes stolen by Nick Fury.  Unbeknown to all, Nick Fury has been moonlighting as the protector of the universe.  Now the heroes unite on the moon to stop Fury from unleashing more power from the Watcher’s eyeballs, defeat Dr. Midas and stop the world from ending.

As per usual, this issue is all action as things come to a head and the heroes fight to stop Nick Fury.  Nick Fury is finally shown his original sin (or one at least) and it is confirmed that he killed the Watcher.  Of course the Orb was the crazy one responsible for blowing up the place and taking one of the Watchers eyeballs.  Fury detonates the eye, killing Dr. Midas and himself and the Orb merges with the remaining eyeball, finally gaining two though one’s coming out of his chest.  At the end, it appears the Watcher and Nick Fury have merged, with Fury becoming the “Unseen”, an eyeless Watcher in tattered clothes and chained to the moon.  Sound confusing?  It is.

My major complaint with Original Sin has been with the characterization of Nick Fury.  Making him the know all, unbeatable agent able to take on everything has become old.  He knows the secret code to take control of Iron Man’s armor, can whisper a secret to Thor that makes him unworthy and has a flying car that even S.H.I.E.L.D doesn’t know about.  Its becoming too unbelievable and irritating.  This issue is somewhat of a jumbled mess and by the end I wasn’t quite sure I understood everything.  Why exactly did Fury kill the Watcher and did the Watcher want to die?  How did Fury and the Watcher merge to become the Unseen when pieces of both were found by the heroes and put in garbage bags?  Did the two actually merge?  Why is he chained to the moon?  Apparently I wasn’t the only one as people I talked to were equally confused.  Aaron has a lot of loose ends to tie up and unfortunately fails to do so. The ones he does are done so insufficiently.  It’s a problem that Marvel has with all their events.  There is no ending, only a lead in to the next big thing.  It’s disappointing as I enjoyed a majority of the story but the ending is too much of a letdown.

I THOUGHT THOR DROPPED HIS HAMMER?

Mike Deodato’s art has been pretty good throughout Original Sin and I’ve liked it but there are some flaws in this issue too big to ignore.  First the good.  His detail and layout are exquisite and he is able to make the grand events look as big as they should.  The creepy things, like the Orb with the Watcher’s eye attached to his chest, look unsettling and are effective.  Deodato continues to have a problem with motion and his characters look static.  The best panel is Thor straining to pick up his hammer and it isn’t because it’s well drawn.  It’s unintentionally hilarious with Thor pulling in a way that’s comical.  The other heroes flying away in the background leaving him on the moon doesn’t help.  What makes this even funnier is the fact that two pages back he’s seen holding his hammer.  That’s right, the hammer Fury made Thor unworthy to hold in issue seven is in his hand.  Is an aerial shot looking down on Cap and other heroes.  They’re small in size but it’s obvious Thor is standing with Mjolnir in his hand.  Continuity errors like this are unforgivable and hurt both the art and story.

Original Sin is the first Marvel event I’ve read the entirety of since Secret Invasion.  The lack of an ending and fact it was just a setup to Dark Reign soured me.  Like the others, Original Sin started off strong but was unable to finish in a satisfactory way.  The issue is confusing and leaves too many questions unanswered.  I was fortunate enough to read this without dropping $4.99 but if I had I would be even more upset.  The art is still impressive but has major continuity flaws.  Original Sin #8 is worth a read but nowhere near worth the price point.

Original Sin #8 is a disappointing ending to the event, leaving too many questions unanswered, even creating more. Read it if you've got the chance but save your $4.99.