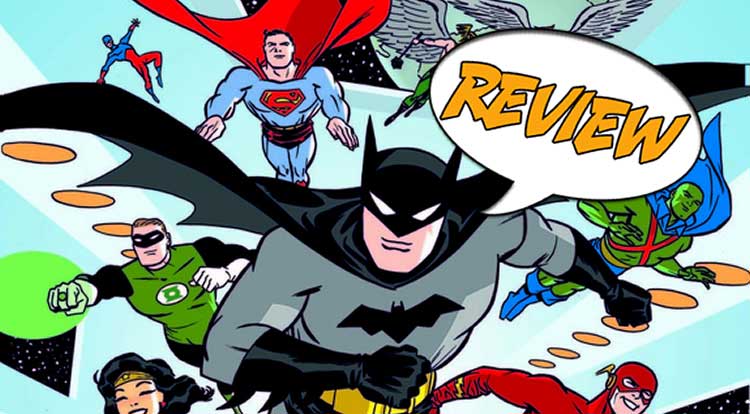 “The shocking conclusion to ‘The Injustice League’ leads to a startling confrontation with the all-new, all-dangerous Doom Patrol! And in the wake of it all, a secret will be revealed that will bond two members forever – and break two members apart.” That’s how this book is described by DC Comics.

Justice League continues to be one of the best-selling of DC’s New 52 books, and they’re taking advantage of that by re-introducing teams who have been known in the past, such as the Metal Men. This time, it’s the Doom Patrol. I have to mention right away that one of the biggest attractions for this issue was the Batman ’75 cover from Darwyn Cooke, a favorite writer/artist of mine. You can see it in the banner above as well as in the lower portion of the text below.

Previously in JUSTICE LEAGUE: “Lex Luthor continues his acclimation to his life as a one of the world’s greatest heroes as they search for the mysterious power threatening to unravel our world. But are his sights really set on the Dark Knight? And are the Dark Knight’s set on him? Plus, someone else is targeting Luthor and his new allies – a man who believes he is Luthor’s superior in every way … and he may be right! Here comes The Chief and his treacherous Doom Patrol to The New 52!”

A big part of this storyline has been moving Lex Luthor closer to joining the Justice League.

As I’ve discussed previously, there’s something about Superman’s nemesis that intrigues people like Mr. Johns, Paul Cornell and other writers. He’s full of shades of gray, and that draws some folks to him because one can never be completely sure what he’s going to do next. Of course, he sees himself as the hero of the piece, and that’s also attractive to storytellers.

In this issue, the League takes the plunge and makes Luthor a member, although there are good reasons NOT to do that. There’s an important part of the book in which the “big three,” Superman, Batman and Wonder Woman, all discuss making this reality. I have to wonder if Batman’s thinking straight since Luthor discovered his secret identity, quite an accomplishment considering that the bald guy has yet to solve who else Superman lives as. Makes me wonder how long the Man of Steel will stick around while Lex steals the limelight.

The best part of the entire book focuses on Batman discussing fear with Jessica Cruz, someone from “our” Earth chosen by Power Ring’s, well, power ring to use as a human conduit. This ring from the Crime Syndicate’s universe resembles the Yellow Rings here in that it uses the person’s fear to draw energy from. Batman talks with Jessica about just what’s going on and gets her to face her fears in a very moving and powerful way. I’m going to be intrigued to see where the character and the ring go from here because once again there’s an indication that the Anti-Monitor is on the way to destroy this universe as he did to the Syndicate’s galaxy. We’ll see. (I always did like the Anti-Monitor, who is getting up there in evilness to a level only occupied by Darkseid in DC previously.

As great as it is to see the Doom Patrol in this issue, they don’t really get a lot of time in the spotlight, so I’m hoping we’ll see more of them again in the near future.

GOOD ART FROM MAHNKE AND COMPANY We’ve learned recently that there’s a new artist coming to Justice League, and that’s Jason Fabok, formerly from Detective Comics. I’m looking forward to his take on the other heroes since I’ve been really impressed by his work on Batman.

Mahnke also does a great job with the Dark Knight, and the aforementioned sequence with Batman and Ms. Cruz was a highlight of the issue.

I have to say that I did like the early part of the book with the DP against the League, so it did get off to a great start.

BOTTOM LINE: A Great Wrap-Up to the Pre-Futures End League

Of course, this month will feature a Justice League Futures End #1 coming our way with a 3D cover no less, so there will be a little bit of a break before we get back to the “regular” storytelling. Jeff Lemire will be writing this edition, so it’ll be well worth the buying and reading.

In October, here’s what will be taking place in #34: “Paranoid survivalist. Wanted fugitive. Damned soul. Meet the newest member of the Justice League: Jessica Cruz, a.k.a. Power Ring! With the most dangerous weapon in the universe in her possession, Jessica has been transformed into a dark prophet – one who will force the other members of the League to confront their greatest fears in preparation for a horrific new threat. Meanwhile, Batman and Lex Luthor continue their mission to cure the world of super-villains – but will the extremes they’re willing to go to threaten even their closest allies? Lex hopes so.”

The same creative team that brought us issue 33 will be back for this one, so it should also be a great read.

Since I’m a big fan of Geoff Johns, I’ve been loving this title since the New 52 came into being, so I’m happy that the stories have been as entertaining as ever. If you haven’t been reading them, I would recommend you give them a chance. Mr. Johns continues to update the League, making them relevant to today’s readers and chock full of adventure!

A Great Wrap-Up to the Pre-Futures End League

It's a great way to conclude this four-parter before Futures End comes in September!