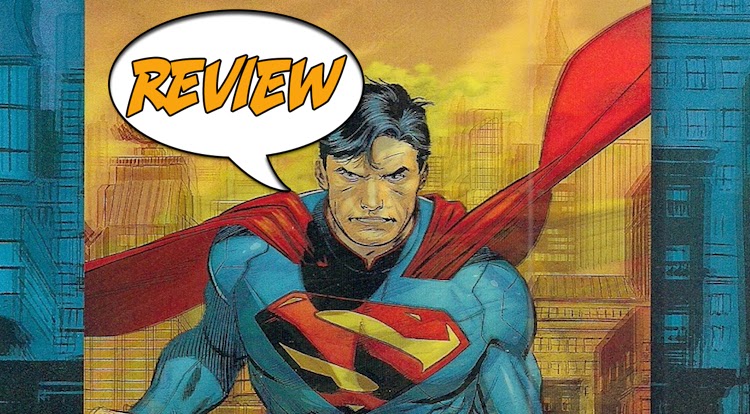 It’s Futures End month and DC is releasing one-shots giving insight into what their characters are up to five years from now.  As we learned (or may not have) from Villain’s month last year, these stories might not tie directly into the event.  Is Action Comics: Futures End #1 one of those books?  Read the review and find out.

Previously in Futures End: After the great war, the DC universe has become a different place.  This month DC releases line wide one-shots to take a look at what is happening with their characters five years from now.  This is what Superman’s been doing.

Five years from now, Clark Kent is attempting to grow plants in Ethiopia to help put an end to hunger in the region.  You read that right.  Clark Kent has given up being Superman to try and grow plants in an area lacking nutrients.  Why has he given up being Superman?  I couldn’t tell you because it’s never explained.  Much like the Detective Comics book that also came out this week, Action Comics: Futures End #1 has little to do with the event, instead telling a story of a Superman-like being made of sand/dirt who gives people superpowers for a brief time.  It sounds silly but is actually a somewhat inspiring one even if the expectation isn’t met.  The issue focuses on three people, a young woman about to commit suicide, a gambler in debt to bookies and a boy with an abusive father.  Sholly Fisch does a great job at showing the difference in how each character uses the powers given and not all of them are for good.  I wondered just why this was happening but Fisch has a great payoff.  As the Super-Sandman tells Clark at the end his greatest power was to inspire.  Each person at the crossroads had the opportunity to realize their potential.  It’s a great ending and proves why Superman is needed.  I really liked and thought the being was inspired by Superman and in turn wanted to inspire Clark to realize his full potential.

All is not good though.  Fisch doesn’t even attempt to explain what Super-Sandman is or how he was created.  In fact, Super-Sandman’s own explanation is basically “I don’t know.  Maybe mystical residue from your final encounter with Mxyzptlk or to fill a gap you left.”  It’s a poor story choice and adds unneeded questions.  The biggest flaw is the same one Detective Comics has: it barely has ties to Futures End.  Again, while the story is enjoyable, the questions raised by Futures End are the ones I really want answers to.  That’s the story I wanted to read: what brought Clark Kent to where he is five years from now.  I instead got a story I liked but could have been told in any other Action Comics issue.

SHADING WITH TECHNIQUES OF YESTERYEAR

Both Pascal Alixe and Vicente Cifuentes do a great job with the issue but I’m not sure whose section is whose.  The majority of the book is drawn in a detailed “scratchy” style that looks realistic.  It’s very well done and looks cool but there is a shading effect that is a bit problematic.  Many of the lighter shade tones are colored like you would see in older comics, meaning tiny dots.  Mixed with the loose, scratchy lines it sometimes gives a blurry appearance.  I thought it detracted from the work and brought down what was some wonderful work.  The other art is more typical of what would be seen in a comic today.  It has some nice movement and Super-Sandman is a stand out, with dust and dirt constantly expanding from his body.  Overall, quite well done by both artists.

BOTTOM LINE: NO ANSWERS HERE EITHER

Once again, if you’re looking for an Action Comics book with heavy ties to Futures End you’re going to be disappointed.  While we get a good story it’s not the one I wanted.  I wanted one explaining what Superman has been doing during Futures End and why.  I’ve read three of the Futures End one-shots released this week and only one has decent ties to the event.  Maybe I’m misunderstanding the purpose of these books but I don’t know what DC is thinking.  If this problem persists it is sure to piss a lot of people off.

Action Comics: Futures End #1 tells a nice story that in no way ties in to Futures End. Sure to disappoint fans of the event.