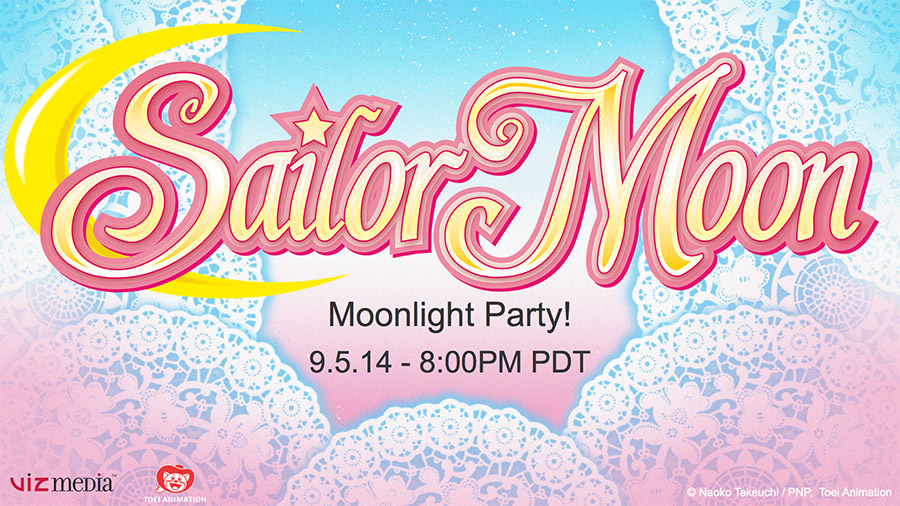 Viewers can simultaneously watch the live, uncut SAILOR MOON Episodes 1-4 during their premiere on Hulu and join the VIZ Media staff on its YouTube channel for a lively evening of witty commentary, inside facts and tons of fun from the company’s headquarters in San Francisco.

Throughout the Moonlight Party fans may submit their SAILOR MOON questions via YouTube in the comments sections of the livestream, on the official VIZ Media Facebook page, and Twitter by using the special hashtag, #MoonlightParty for a real-time Q&A with VIZ Media staff that will run throughout the event. Fans can interact with members of the VIZ Media SAILOR MOON team, which will be participating in the live stream to answer questions and offer lively commentary and little known information about the series and the premiere episodes. A SAILOR MOON trivia contest also will take place and fans are invited to participate and submit answers via Facebook and Twitter to win special prizes. Sailor Moon fans nationwide are also encouraged to share pictures from their own Moonlight Parties by using the hashtag #MoonlightParty on their favorite social media platforms.

VIZ Media’s first-ever Moonlight Party kicks off the premiere of a host of new SAILOR MOON content that will air exclusively on Neon Alley and Hulu beginning in September for a limited time. In addition to the premiere of Episodes 1-4 on Friday, September 5th, viewers can catch more of SEASON 1 of the classic, uncut SAILOR MOON featuring the new English dub as Episodes 5-23 become available to stream beginning at 12:00am (PST) on Sunday, September 7th. Brand new subtitled SAILOR MOON Episodes 35-36, which present the entire Sailor Guardian team together as one for the first time, along with the Princess they seek, also will premiere on Hulu and Neon Alley, for a limited time only beginning at 12:00am (PDT) Monday, September 8th to celebrate the weekly Moonday.

“The first weekend in September will deliver plenty of excitement to anime fans with a chance to join us for our first-ever Moonlight Party, celebrating the premiere of the uncut re-mastered SAILOR MOON English dub,” says Charlene Ingram, Senior Manager, Animation Marketing. “We also will be sharing fun facts about the production, giving out prizes for a special SAILOR MOON trivia contest and having fun with viewers nationwide as we celebrate the return of this legendary anime series. We hope this also might inspire some fans to share in the fun and join us with SAILOR MOON Moonlight Parties of their own!”