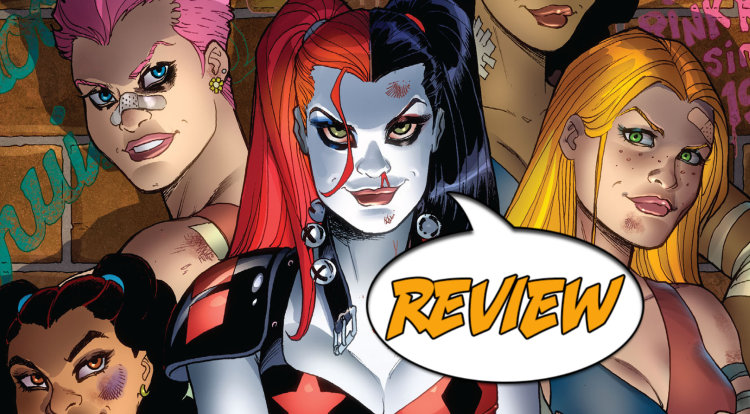 Harley Quinn #10 features a roller derby Fight Club, a swim at the beach and another DC character falling to earth. My main issue with the update of Harley Quinn in the New 52 (leaving the costume aside, because that is too easy), is that she’s not special anymore. Writers Jimmy Palmiotti and Amanda Connor bring a girl to the pages of Harley Quinn #10 that I went to high school with, loud, brash, scantily clad and reckless to a fault – I didn’t like her then and I don’t like her in these pages. The truly baffling thing about Harley Quinn #10 – and the entire run of the series up to this point – is that Palmiotti and Connor are so much better than this, which leads me to conclude that someone from editorial is holding a thumb down on this book.

Moving on from that …

Harley Quinn #10 opens up with Harley preparing to enter a Fight-Club-cum-roller-derby event – a trope that’s been picked up by so many writers since Chuck Palniuk’s book hit stands. Since Harley is questionably super powered her opponent is a gigantic, nearly-nude, nye unintelligible woman who poses nothing by way of threat except stature. Inexplicably Harley and her nameless gaggle of friends are being chaperoned through the event by Sy Borgman who looks like Spider Jerusalem if he lives long enough to have his habits catch up with him.

Following the roller-Fight-Club match Harley and company go eat dinner at an all night diner, send Sy on his way and go for a midnight swim to show off their bodies and talk about their feelings. The issues closes with the reveal of another DC character crashing to earth in a B-plot that reads as if it has been shoehorned into the issue to fill a full 22 pages.

The problem with the events of Harley Quinn #10 is that they ought to be about any non-Batman-rogues-gallery girl finding herself in New York City and making some questionable, but comical decisions along the way. Even ten issues in this series and its protagonist lack anything even remotely recognizable from the original character save the white skin. While the narrative is objectively fine it lacks a lot of the heart that Palmiotti in particular has breathed into past comics works and does very little to inspire the reader to be interested in a character who, for some reason, can add very little by way of personality or uniqueness to the issues as a whole.

Judging by the final splash page of Harley Quinn #10 this series is being prepped to fill out the B-plot of another DC Comics title because editorial still can’t decide what to do with one of the most well-beloved characters in their canon and this is not only a shame for female readers who could use more representation (even is Harley Quinn is far from an ideal role model), but for all readers who were hoping to get more stories of the Clown Princess of Crime.

THE ART IS FINE

Once again, setting the costume design aside, Marco Failla does a fine job on Harley Quinn #10. He is no Amanda Connor, but the ladies that largely populate this issue are lovely and skinny as readers have come to expect from the big two and nothing is particularly inoffensive. That being said, nothing across 22 pages really stands out either and, like the very average plot, it’s a bit of a shame.

The final splash page of the issue is probably the best thing in Harley Quinn #10 plot wise and from an artistic standpoint and can’t help but make me wonder if Failla ought to be drawing that character’s title rather than this one.

BOTTOM LINE: YOU CAN LEAVE THIS ISSUE

Even if you are reading the Harley Quinn series as a whole (which I admit I’ve dipped in an out of), Harley Quinn #10 offers almost nothing in the continuing narrative readers have been presented with. It is fine in every aspect of its creation and probably isn’t worth actually paying for.

Roller derby, skinny dipping, this issue lacks the originality of a character who had once been amongst their most unique.