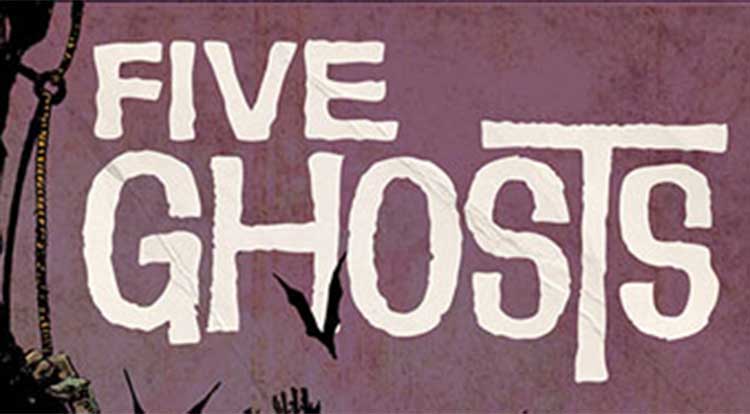 Five Ghosts gets new story arc and a television show, too

Co-creators Frank J. Barbiere, Chris Mooneyham, and colorist Lauren Affe return for the beginning of an all-new story arc for FIVE GHOSTS. “Monsters & Men” begins on 10/15 with issue #13, just in time for New York Comic Con. This new arc will bring the acclaimed action adventure series to Eastern Europe and establish a new element of horror to the series. The series is also in development for a television series with Universal. The new FIVE GHOSTS story arc features an assortment of famous monsters and literary figures. “Most notably the new arc will bring Fabian face-to-face with the legendary demon hunter Van Helsing,” hinted Barbiere. “Issue #13 will serve as a great jumping-on point and has been made fully returnable for all Diamond retailers.” The issue will also feature a blank sketch cover, available to all retailers to order, as well as a number of exciting retailer exclusive variants.

In addition to its continued success in the comic world, FIVE GHOSTS has been optioned by Universal Television and is in development for a television series. The project has acclaimed screenwriter Evan Daugherty (Snow White and the Huntsmen, Divergent, Teenage Mutant Ninja Turtles) attached as a writer and is being produced by Black Mask Studios and Benderspink. FIVE GHOSTS will also be branching out into new media endeavors over the next year with partners Black Mask Studios.

FIVE GHOSTS #13 arrives in stores this 10/15 and will be available for $3.50. It can be pre-ordered using Diamond Code AUG140647. The sketch variant can be ordered with Diamond Code JUL148416. The final order cutoff deadline for retailers is 9/22.