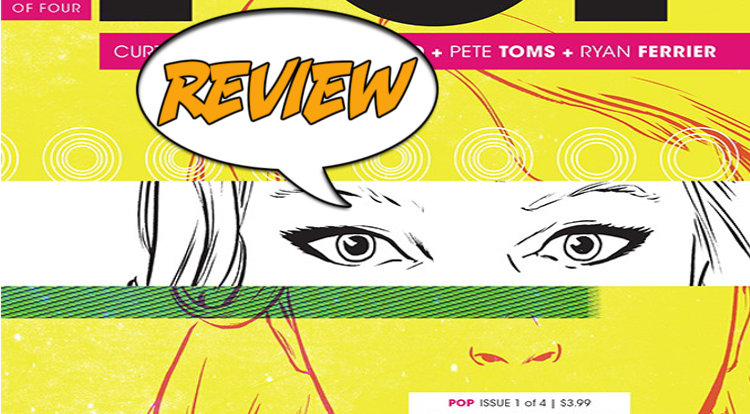 Pop #1 presents a world where the stars of popular culture are grown by an evil corporation … and what happens when a young starlet escapes?

In Pop #1 writer Curt Pires presents a dystopic look behind the curtain of North American celebrity. Through incubation and careful construction – not unlike what readers have seen of the Weapon X Program – every great pop culture superstar has entered the scene. Britney and Mariah are name dropped on the second page.

The as of yet unnamed head of this organization employs an awful lot of exposition to tell both fellow characters and the readers the function of his facility and expound its success – until he notices that their latest project – a young, blonde woman named Elle Ray – is no longer inside her artificially constructed womb. All security measures are employed (including, but not limited to Mr. Burns-esque dogs), but it is all for naught.

A few more pages in Pop #1 we meet Coop. Coop owns a comic book and record store and has something of a sour view of his lot. He’s depressed to the point of ending his life when a nearly naked blonde, young woman literally runs into him. The aforementioned Elle has collided with Coop and he sudden appearance and subsequent loss of consciousness forces Coop to decide what to do with her. The ignoble act – when its true motivation is revealed – of bringing Elle to his apartment and looking after sets off the string of events that will certainly play out throughout the remaining three issues.

Pires employs several versions of Big Brother that show influences from both Orwell and Huxley. These classic literary tropes are transposed against the foil of contemporary pop culture. While searching for Elle the mysterious celebrity corporation forces their way into Dustin Beaver’s (yes, a barely clad Justin Beiber analogue), Hollywood home in order to use him to get to Elle. It’s a funny moment that I cannot help but fear will date this otherwise well-thought out and constructed series as the years go by.

The weakest part of Pop #1 are the two officers the corporation sends to Dustin’s. As with their leader they employ buckets of exposition in order to get information to the reader to the point where the speech balloons in the final pages of the issue nearly overtake the art.

Pop #1 is an interesting idea penned by an intelligent writer in Pires, but it lacks a certain refinery that I was truly hoping to see here.

Jason Copland’s art throughout Pop #1 is alternately engaging and dated. Elle, Coop and all of their interactions together are truly served by Copland’s aesthetic. They are both nice looking, but sad giving readers an easy in to feel pathos for their situation, yet happy that they will be working together to move through the events of coming issues.

The business at the lab and later on with Dustin Beaver feels less served by Copland’s sketchy style. Ultimately, we are left with the feel of a very contemporary story with art that would have been seen 10 years ago. That is not to say that that art is bad, it just fails to synch with the hyper up-to-date tale that Pires has put on the page.

Pete Toms is on colour duty for Pop #1 and has done an excellent job of covering the book in a flat colour palate that speaks to the despair and disconnection that almost every character we meet displays at some point throughout the issue.

Pop #1 is a good idea with a lot of information dispelled in 22 pages. It is my hope that the next three issues can have fewer words on the page and really allow the story’s star characters – Coop and Elle – to grow together and come to shine.

Pop #1 presents a very interesting world, but is bogged down by a lot of exposition at the beginning and end of the issue.