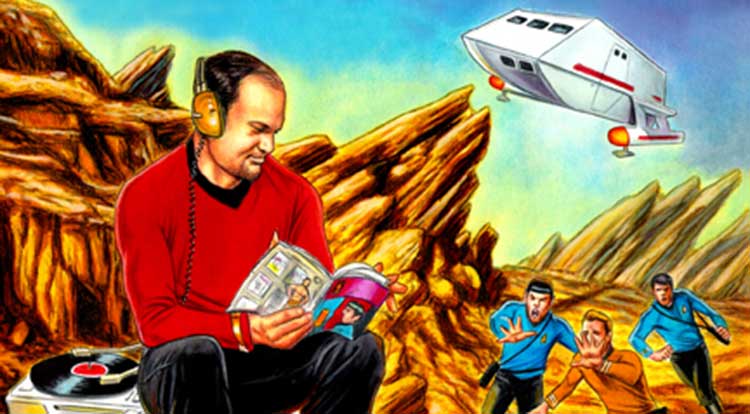 On 8 September 1966, visionary futurist Gene Roddenberry introduced the world to a science-fiction TV series that dared to go where none had gone before. Star Trek, with its progressive stance on civil rights, explored not only strange new worlds in the final frontier of space, but also the human condition, revealing the heights to which humans could soar, while exposing the ugliness of racism, sexism, and war. Though canceled after only three seasons, Trek soon returned in syndication, spawning a cult phenomenon that has since expanded to include four follow-up TV series, an animated cartoon, a dozen movies (and counting), and a staggering number of ancillary novels, short stories, and comic books. Once deemed a network failure, Trek survived to become one of the most influential franchises of all time.

Licensed Star Trek fiction has played no small part in that success. Trek comics have enjoyed almost continuous publication since 1967, spanning more than a thousand issues and storylines to date, from Gold Key / Western, City Magazines / IPC, Marvel Comics, Power Records, the L.A. Times Syndicate, DC Comics, Malibu Graphics, WildStorm Productions, Tokypop, IDW Publishing, and Wired Magazine. Quality has varied, from hilariously off the mark (Gold Key’s efforts and weekly British strips) to wonderfully reverential (DC’s longstanding titles and IDW’s current run). But from one era to the next, the illustrated voyages of the starship Enterprise have continued Star Trek‘s ongoing mission as a Wagon Train to the stars.

New Life and New Civilizations: Exploring Star Trek Comics examines the long history of Star Trek in the four-color realm, featuring insightful essays from popular Trek comic scribes and novelists, as well as other experts. After almost 50 years, the human adventure is still just beginning — find out why Star Trek comics have not only lived long, but prospered.

The book features a foreword by David Gerrold (author of “The Trouble with Tribbles”) and a cover by Patricio Carbajal. It runs 304 pages and is available in print and on Kindle. You can read more about it on the book’s official page.

About the Publisher: Sequart Organization is devoted to the study of popular culture and the promotion of comic books as a legitimate artform. Sequart has released twenty books, five films, and thousands of online articles. Its documentaries include The Image Revolution, and its books include Grant Morrison: The Early Years. In 2015, Sequart will release the documentary She Makes Comics (about the history of women in the comics medium) and another documentary on writing powerhouse Neil Gaiman.