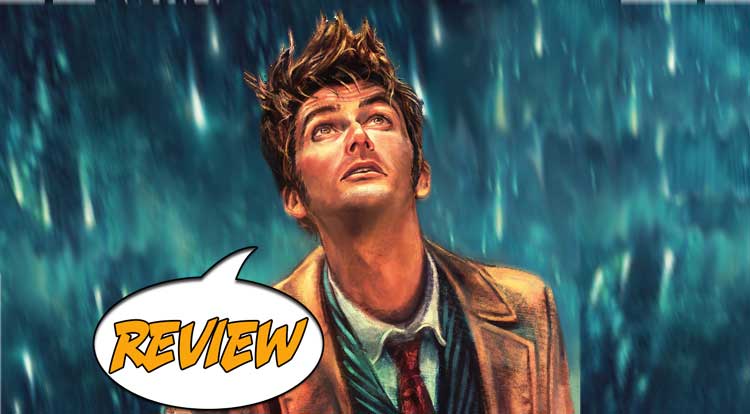 Doctor Who: The Tenth Doctor #2 Review

The tenth incarnation (by some counts, anyway) of the man called The Doctor is back, or perhaps he never left?  Either way, he’s the skinny one with the coat and the sand shoes, and all of time and space awaits him!  Your Major Spoilers review of Doctor Who – The Tenth Doctor #2 awaits! Previously in Doctor Who: The Tenth Doctor:  With the recent debut of The Twelfth Doctor (who, yes, is actually number fourteen in order, I understand, stop writing angry letters), it seems that Doctor Who is poised to be as popular as it has ever been in its history.  Given the multiple iterations of the character, it’s odd to me that no one has thought to create ongoing adventures of older, non-incumbent Doctors in comic book form, the way they do with the novels and audio plays.  Titan Comics has done just that, with ongoing monthly adventures featuring the last two Doctors, each very popular, and each fascinating in their own way…

Issue #1 ended on a cliffhanger, as young New Yorker Gabriella Gonzalez discovered a monstrous presence on the subway with her, as well as a strange man in a long coat with a glowing device in his hand.  Y’know, like you do in New York.  Things quickly get dangerous, as The Doctor’s attempts to calm the creature down only make it angrier, sending Doctor and erstwhile companion on the run.  They leap from the train, and are nearly devoured, but (thanks to Gabby) saved, when the creature sees itself in her mirror.  The Doctor’s interest is piqued by the mystery, but he pointedly tells Gabby to go home and pretend she never met him at all.  (This, by the way, is why my personal canon places this adventure in the “lost days” between Tennant’s last series and the one-shot movie/specials that ended with his regeneration.  He’s clearly still upset about the way his last few companions left him.  Mileage, as always, may vary on that one.)  I like the idea of the Doctor operating in America, especially as his usual tricks don’t work with streetwise Gabby, up to the point where she knocks him on the head with a baseball bat while he is skulking around her father’s laundromat, searching for clues.  As the threat becomes clear, The Doctor leaps into a strange vortex to stop the monsters possessing New Yorkers, while Gabby defends her father’s business in a manner both brave and endearing, but the issue ends with both in hot water…

…as all good Doctor Who stories do.  As always, when dealing with a licensed property like this, the biggest question, and the one that makes all the difference for me in terms of the success of the story is, “Do the characters look right?”  In this case, David Tennant’s face is perfectly done throughout the interiors of the book, with a GORGEOUS painted cover that looks more like The Tenth Doctor than the actual Tenth Doctor, in some ways.  Elena Casagrande also provides great background details, such as the running battle in the subway, and the streets and alleys of the city, always giving a clear sense of location to the visuals.  I like the way the writer Nick Abadzis plays with story beats and dialogue to simulate the adventure of watching a television episode, and Gabriella is a character that I very much enjoy (and, obviously, one who impresses the Doctor with her thoughtfulness and bravery.)  The monster-of the-week seems to be a bit one-dimensional right now, but I’m willing to see them in action, and see if they can transcend their “alien comic book monster” roots.  In short, it’s a very successful issue, with a clear understanding of what works for The Doctor, perhaps even a more successful adaptation than this Doctor’s last adventures from IDW  (which, if I’m honest, always felt a bit fragmentary and half-realized.)  As one of my favorite Doctors, I’m happy to see Ten in action again, and would hope that this is a huge success, leading to 12 monthly ongoing Doctor Who titles, even if my wallet cringes at the very thought.

So, in short, we have: A likeable companion.  A Doctor who looks, acts and speaks in a manner consistent with that which has come before.  Good art, with alien-y aliens, monstery monsters, and Tennant-y Tennants.  And the kind of cliffhanger that makes me want to come back next time and find out how The Doctor gets out of this one.  Summing up, Doctor Who: The Tenth Doctor #2 is an enjoyable read, and kicks off what I hope is a long and successful run with this creative team, because who doesn’t love some pointy hair and sideburns now and then, earning a well-above average 3.5 out of 5 stars overall.  Fingers crossed for a Sixth Doctor ongoing!  Who’s gonna sign my petitions?

DOCTOR WHO: THE TENTH DOCTOR #2

The Doctor in hot water, a new companion with potential, with art and dialogue that are perfectly fitting.