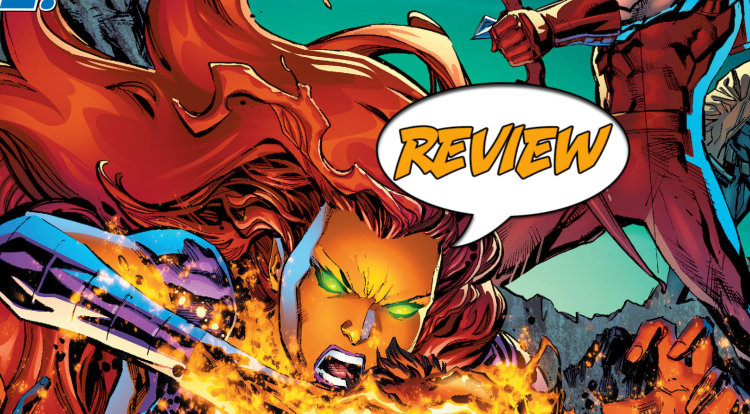 Red Hood and the Outlaws #34 Review

Princess Koriand’r comes face-to-face with a piece of her past which forces Roy and Jason to play her moral compass in Red Hood and the Outlaws #34.

The best thing about Red Hood and the Outlaws #34 is that any reader can pick it up, with limited character familiarity, and completely understand everything that plays out across the issue. Writer Scott Lobdell supplies readers with enough context and exposition without drowning the narrative out in order to keep clear what minute details have been cemented since the beginning of the New 52.

Red Hood and the Outlaws #34 focuses heavily on Starfire’s search for revenge. She hunts down the Keeper of the Slaves who had years ago held her captive – and happens to be residing in Malibu. As with a classic tale of revenge Starfire is all but blind to everything else in the world as she comes face-to-face with the man who effectively ruined her life.

Jason and Roy watch the events unfold from the safety of S.H.A.D.E. headquarters along with Ray Palmer and Kirk Langstrom and are baffled to learn that S.H.A.D.E. had been keeping tabs on Koriand’r under the suspicion that she herself may have been involved in interstellar sex slavery. As with previous issues of this title it feels a bit strange to have Jason Tood as the Red Hood play the voice of reason throughout Red Hood and the Outlaws #34. Not only is he responsible for speaking up on Kori’s behalf to Ray and Kirk until Roy takes up the cry, but later on in the issue he keeps the Tamaranian princess from making one of the biggest mistakes of his life.

When readers encounter the former Keeper of the Slaves Lobdell does an excellent job at presenting him as a character readers could potentially have pathos for. Even as Starfire stalks outside his ocean side window the elderly man is caring for his granddaughter who has awoken squalling in the night. In spite of his impending doom, the former Keeper of the Slaves remains silent and dignified as a foil to Starfire’s fiery (forgive the pun), anger.

Red Hood and the Outlaws #34 draws to a close with Princess Koriand’r about to snatch her revenge and Roy and Jason swinging in to once again take up the mantle of moral compass.

Lobdell presents a solid issue with a good story that can absolutely stand on its own regardless of a reader’s preexisting knowledge of this title and lends accessibility to a narrative that is forgotten by several contemporary writers working for the big two.

A LOT OF FAMILIAR FACES

Art team R.B. Silva and Cory Smith put solid work on the page and Starfire looks truly amazing in her close up panels. The flames that make up her hair are incredible, most notably on the final splash page of the issue, and she is the very best thing about the art of Red Hood and the Outlaws #34. Special credit out to be given to colourist Matt Yackey for the dynamic nature of the aforementioned alien hair.

However, when one looks at the various male characters that populate Red Hood and the Outlaws #34 the quality of the art drops. Most of the men wear the same face and if it weren’t for the sharp difference in hair colour between Jason and Roy they would be hard to tell apart. When we are at the S.H.A.D.E. headquarters Ray Palmer and Kirk Langstrom are virtually indistinguishable because they have a slightly different colour of blonde/brown hair, which I believe speaks to a weakness in the overall character designs throughout the issue.

For the most part, the art gets the job done, but with a few exceptions, it is difficult to find anything incredible there.

A GREAT STORY IN THIS ISSUE

Red Hood and the Outlaws #34 is the type of adventure team-book (as branded in the New 52), that Scott Lobdell excels at. You don’t need to know anything to enjoy it and I’ve never enjoyed reading Starfire as much as I did in these pages – it’s enough to get back the frequently lack luster art.

Red Hood and the Outlaws #34

Red Hood and the Outlaws is a solid adventure story that readers can jump into without any previous knowledge of the series and Starfire looks amazing.