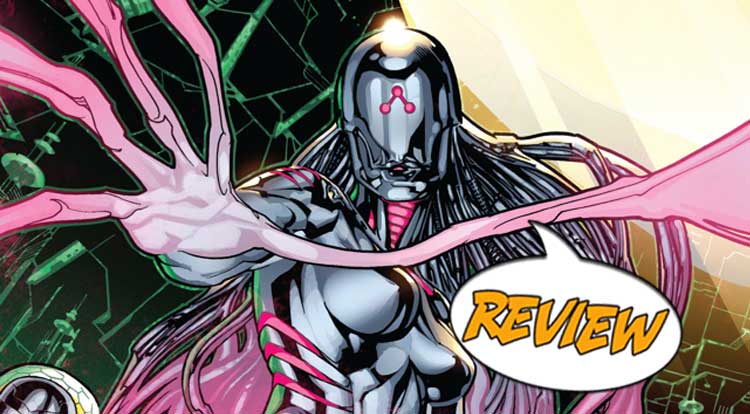 Things are falling apart in the world five years hence, and the heroes we think we know may be too concerned with their own problems to realize that their world is in peril.  Who’s gonna save the day?  Your Major Spoilers review of The New 52: Futures End #16 awaits!

Previously in The New 52: Futures End:  After things finally went entirely wrong 30 years in the future, Batman prepared to send himself back in time to stop the events that led to Armageddon.  Unfortunately, his demise left Terry “Batman Beyond” McGinnis to travel back in his stead, landing five years into the future of the New 52.  It’s a world full of familiar faces with unfamiliar motivations and, most importantly, Terry believes it’s officially too late to save the world.  So, what’s the point of all the sturm und drang?

It’s been six weeks or so since I check in with Futures End, but it doesn’t seem like very much has changed in that time.  Mister Terrific is still working to pull off the launch of his exciting new world-changing technology (though he seems to be communicating with a disembodied presence now), Lois Lane is still derping around Metropolis trying to figure out the deal with Red Robin (though there’s a full-on appearance by the now-behelmeted Superman), and there’s still some wackiness involving Stormwatch in space (Hawkman and The Engineer are back from the dead, and their plot has now intersected the plot of Amethyst and Frankenstein in their quest for answers.)  Most egregiously to me, Deathstroke and Grifter, joined by Lana Lang, are still on Cadmus Island, hanging about with the dreadfully-named Fifty Sue, who now wants Slade and Lana to be her new family.  There are developments that are new to me: A quick appearance by new hero Stormguard, who is something of a melange of Captain America and Batman, ends up being a four-page infodump, filled to the brim with awkward exposition designed to remind us this is the future and give us his back story.  The one shocking reveal comes at the issue’s climax, as we find that The Engineer has been revamped and refitted by another system: Brainiac.

WE’VE SEEN THIS BEFORE

When DC resurrected the weekly comic format (used to mixed reviews with Action Comics in the 1980s) for 52, they delivered a big hit, taking lesser-known lights of the DCU and putting them in the spotlight for interesting story developments.  (Of course, 8 years later, the main characters of that series are nowhere to be seen, and in the case of Renee Montoya, have had their entire story retconned away.)  The follow-up series, Countdown, was a shock-driven mess, and this book has so far been diminishing returns over even that.  It’s hard to take seriously the expectation that the grimdark world of five years from now is the most terrible future ever when it’s a warmed-over group of plot points and elements we’ve seen half a dozen times before, in Final Crisis and elsewhere.  The stakes here are never really clear, as it’s almost certain that the heroes of this future won’t exist in these forms at the end of the series, which makes it hard to engage with the story, and the multiple storylines in play make the entire affair move at a snail’s pace, with several stories seemingly unchanged since I last read the book, weeks ago.  From an art perspective, it’s an okay issue, and I appreciate the subtle work that Merino and his inkers are putting into making the various settings visually distinct, but the fragmented storytelling doesn’t give them anything much to work with.  Indeed, this is an issue filled with conversations, broken up only by a quick battle sequence between Superman and Rampage that doesn’t even get a conclusion.  There’s nothing wrong with the art at all, it’s perfectly workmanlike, but stories like this really need the kind of punch that George Perez would have delivered…

THE BOTTOM LINE: A REAL SLOG TO GET THROUGH

In short, this is a pretty disappointing book that doesn’t really give the reader much satisfaction, although they’re finally revealing some of the long-hidden secrets of the setting.  Granted, they’re doing it four months into the ongoing story, but at least we’re finally seeing some of the links that presumably make the story coherent.  I’m saddened to see several strong writers, as well as Dan Jurgens, involved in a scenario that has them seemingly pulling in different directions, because there are grains of stories I want to read here: Frankenstein with Hawkman’s severed arm attached, the bits in Metropolis, what’s the deal with Stormguard.  Alas, they’re all swirled together in a what amounts to a yogurt, ham and Raisin Bran salad: Several things that are good on their own, but less palatable all together.  All in all, The New 52: Futures End #16 ends up being a somewhat confusing and really trying reading experience, without much in the way of payoff, earning a disappointed 2 out of 5 stars overall.