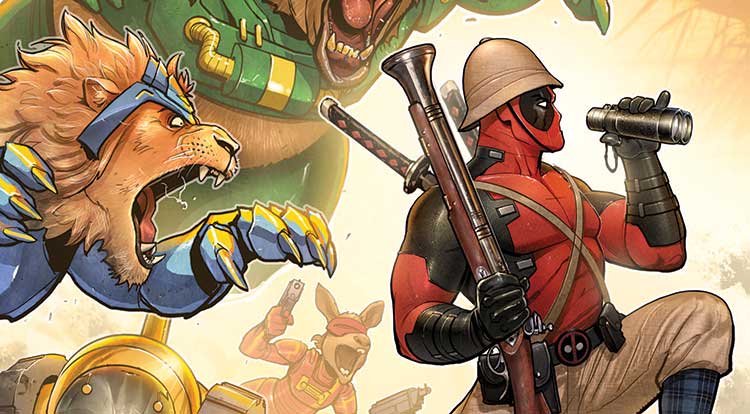 Here’s your first look at Deadpool Bi-Annual #1 from Marvel Comics.

DEADPOOL BI-ANNUAL #1 (JUL140685)
Written by PAUL SCHEER & NICK GIOVANNETTI
Art by SALVA ESPIN
Cover by DAVID NAKAYAMA
Written by Paul Scheer (star of The League & NTSF:SD:SUV) & Nick Giovannetti (Aliens vs. Parker) with art by Salva Espin (Deadpool vs. Carnage) – Deadpool is going to come face-to-snout with the some of the toughest and most absurd enemies he’s ever faced! When the Merc With a Mouth is hired by WaterWorld to protect their theme park from environmental activists, he had no idea that meant a heavily armed team of armored-up talking animals! A mechanized kangaroo with a machine gun is just the beginning! Don’t miss it when Scheer & Giovannetti take the Merc With a Mouth for a spin when DEADPOOL BI-ANNUAL #1 hits comic shops and digital devices this September!