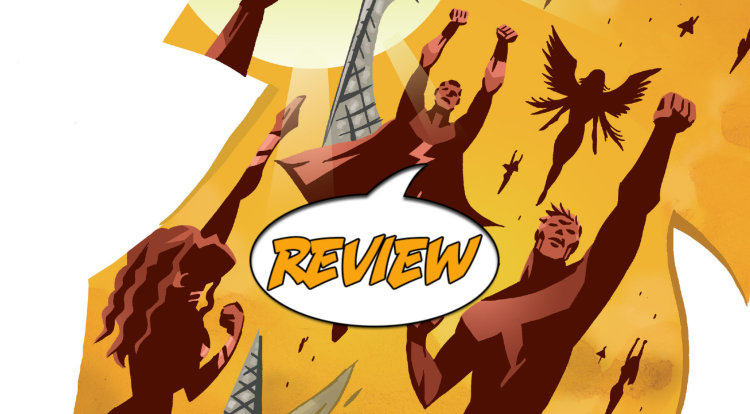 Ray gets pulled deeper into the world of illegally experimenting on and kidnapping Supers at the hands of his delinquent brother Denny in Black Market #2. The tone of Black Market #2 is very much that of a noir pulp novel. Writer Frank J. Barbiere has his protagonist and scientist Ray narrating a look back at the exact moments that tore his life apart. In this second installment Ray begins with lying to his wife about his nighttime commitments, even though he himself is not privy to the exact plan until everything unfolds before him.

Ray’s brother, Denny, whom readers will remember as the catalyst for the events of this story leads his brother into progressively more danger throughout Black Market #2. Not only does Denny sell parts of a Super cadaver for money in the opening pages of the issue, but he also procures the [presumably]off-the-books lab for Ray to conduct his research in and takes on the responsibility of rounding up so-called Super “volunteers” for the aforementioned research.

There is a well-earned chase scene in Black Market #2 that represents the height of the on-page action, though this issue is never boring. While Ray’s internal monologue touches on tropes of both the fallen hero and the fringe scientist, Barbiere presents the narrative with a distinct enough voice in a world that is close enough to our own to keep readers hooked. Ray’s wife in her innocent love and devotion to him despite the increasingly vile nature of his after-hours activities provides a nice personification of the life that is certain to slip through his fingers in the final two issues of this arch.

The Supers themselves are a compelling part of the society that unfolds throughout the pages of Black Market #2 by simultaneously being feared to the point of reverence and utterly despised, depending on the circumstance and character’s viewpoint. Not one, but two Supers meet rather dramatic ends in the pages of Black Market #2 and even though readers don’t learn much about the personal struggle of either Super it still reads as a narrative tragedy.

With only two issues left for the arch to wrap up in the wake of Black Market #2, I fear that Barbiere has a lot of events to put on the page. His narration could lean more into the realm of telling and not showing that is an absolute crime in the comic book medium, but the series has been well penned thus far. Ray’s downward spiral into personal and professional demise begins on the final splash page of Black Market #2 and the speed of the descent is shaping up to be great fodder for the remainder of this series.

In keeping with aforementioned noir feel of Black Market #2 colourist Adam Metcalfe’s work stands out the most in this issue. His shadow and light work is often multi-tone and helps bring an extra dimension to Victor Santos’ relatively simple linework – which is certainly charming in and of itself.

Moments of deception and high danger are all presented in a wash of dark shades and when bright tones are employed they make the situation feel falsely safe and bright. All of this would speak to Ray’s growing paranoia in his perception of the world around him as the constructs of his life begin to fall apart.

Santos’ work feels like an extension of Barbiere’s storytelling. It is to-the-point without being overly stylized and strikes up much of the contrasts between the human characters and the Supers. Readers can almost always pick out the metahuman in the room because they are so much larger than Ray or Denny. Overall, the art of Black Market #2 very much serves the story being told.

THIS IS A NEAT MINISERIS

… and Black Market #2 lives up to the interesting world we were presented with in the previous issue. The world is not something utterly original, but the issue is well-executed, the focal character is compelling and this second issue was fun to read. Pick it up.

Black Market #2 is a fun second issue in a short miniseries that you will enjoy reading.