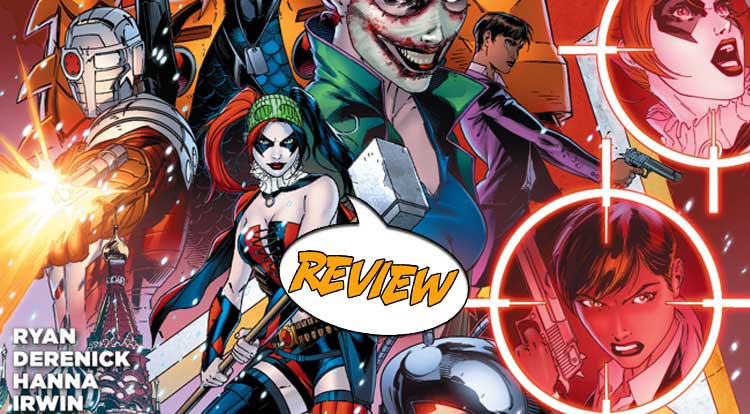 The first issue of the revamped Suicide Squad defanged Amanda Waller and put her charges in an untenable position.  With a title like that, you know not everyone is making it home, but will ANY of the Squad get back to Belle Reve in one piece?  Your Major Spoilers review of New Suicide Squad #2 awaits!

Previously in New Suicide Squad:  On their first mission as a unit, the New Suicide Squad (Black Manta, Deadshot, Deathstroke, Harley Quinn and The Joker’s Daughter) have clashed with a group of Russian soldiers, including a squadron of Rocket Reds.  With their name more meaningful than ever, can this group of jerks and sociopaths get it together long enough for one or two of them to walk away alive?

Short answer: Not without effort, no.  The Squad is separated by a massive firefight at the beginning of the issue, and Deathstroke taken into custody, leaving the remaining team members to claw their way out of a one-sided battle, all the while being distracted by Amanda Waller’s new associate/overseer, Vic Sage.  (That is the name of the pre-New 52 Question, for those who weren’t aware, which leads to some speculation on my part as to whether this affects his New 52 counterpart or not.  If not, it’s complicated and annoying.  If so…  it still might be both of those things.)  Their situation gets even worse when the Russian commander offers Deathstroke a contract to work for him, as the remaining villains of the Squad escape by subway (!!), leaving Black Manta in charge.  Weirdly, his giant UFO-shaped helmet aside, Manta seems to have a flair for leadership, bringing his team together despite the animosity between Harley and Joker’s Daughter, and even handles Deadshot’s fatalistic streak well.  By the time the issue ends, Deadshot is full of bullets, thanks to a KGB operative named Knyazev, and a massive explosion seems certain to be fatal for everybody but Deathstroke, but they still seem to be doing issue #3…

A BIG SHOWCASE FOR BLACK MANTA (OF ALL PEOPLE)

From an art perspective, this issue is kind of a mixed bag.  The Rocket Reds look great, and Slade’s silly Rob Liefeld redesign is reined in a bit, but Black Manta looks oddly bulbous, and the whole “face stapled on my face” look of the Joker’s Daughter changes from page to page, and is never consistently as frightening as it should be.  The biggest sin of this issue’s art is more of a problem with the New 52 as a whole, adding lots of lines and belts and such to Marshall Rogers classic, clean Deadshot design, turning it into a noodly mess.  Still, with the number of hands in the art this time around, it’s a relatively consistent issue, and the story makes me actually want to know more about Black Manta’s battle for legitimacy.  I feel like, perhaps, five is a little small for a Suicide Squad team if we’re to believe that they can actually get hurt or killed, but the balance of personalities is handled pretty well.  Most interestingly is the fact that current events in the real Russia are being used as part of the back story here, reminding me of the first time the Suicide Squad had a big dustup with Russian operatives and Rocket Reds, way back in 1986, when I was in high school.  Deathstroke being willing to sell out his partners was also an unexpected, but welcome twist in this issue’s story.

THE BOTTOM LINE: YEAH, THAT IS THE KGBEAST

The biggest problem with this issue is that fact that we’ve seen much of this before, and even the conflict between the characters is done with Michael-Bay-style explosions and angst.  Only Black Manta is in an entirely new role here, and whatever luster the character of the Joker’s Daughter might have had lessens with each thing I read featuring her.  It’s a great visual, but not a lot of substance.  All in all, New Suicide Squad #2 is an interesting, but not terribly noteworthy issue featuring the first New 52 appearance of Knyazev (known back in the day as the KGBeast), which may mean something down the line, but delivers a generally okay and inoffensive chunk of story, earning 3 out of 5 stars overall.  Ryan, Derenick and company aren’t reinventing the wheel, but they’re not failing to deliver above-average comics action…

A nice batch of characters, a nice melange of current events, but not a lot of super-new to be had...