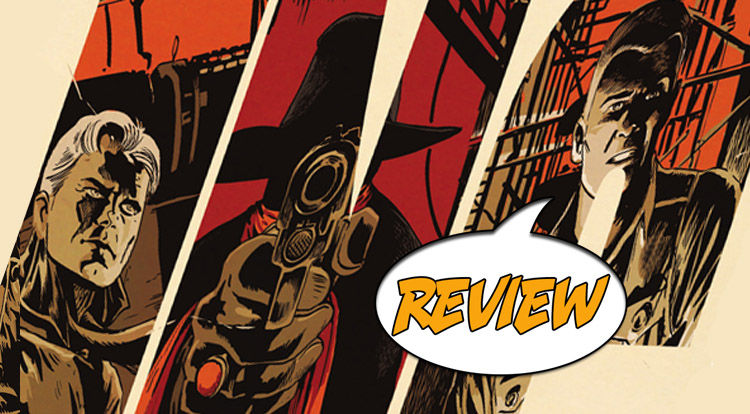 The most recognizable icons of the pulp era are back, and now they’ve combined forces to get at the roots of the weed of crime.  Your Major Spoilers review of Justice Inc. #1 awaits!

Previously in Justice Inc.: “It’s the crisis that brings together, in a historic team-up for the first time ever, Street & Smith’s super star trinity: The Shadow! Doc Savage! The Avenger! This historic cross over is 75 years in the making, JUSTICE, INC. begins here, spawned by a horrific tragedy of death and destruction secretly orchestrated by some of the most powerful and unexpected villains in the history of the pulps!”

In the present day, Doc Savage toils in the labs deep below his Fortress of Solitude, working to isolate a sub-atomic particle that he has named “The Wells Particle,” a key to his newest theory: Time-travel!  When one of his collaborators asks how he could afford such a massive undertaking, Doc muses that it was an investment “with 75 years of interest”, made by Richard Benson (aka The Avenger.)  Cut back to 1939, as a young Doc Savage, Albert Einstein and H.G. Wells himself meet, while bad things happen in the world of Richard Benson.  Michael Uslan is clearly a super-fan of all the properties in play here, and ties into previous series from Dynamite, with references to a tale in which Howard Hughes helped Doc Savage get out of a trap, and other such crossover madness.  In the future, 2014 Doc Savage rips a hole in the space-time continuum, as he seemingly knew he would, while younger Savage prepares to rendezvous with the man who would become The Avenger.  But as Richard Benson and his wife and daughter board a plane, I feel the hair on the back of my neck stand up, but things come to a head when we find out the plane in question: Global Airlines Flight 33!

Those who know their Rod Serling will recognize several key moments in this story, from several different episodes of the classic Twilight Zone series, and I have to admit their inclusion helps me to better enjoy Uslan’s story.  Global Flight 33, for instance, is the very same ship from the Zone Season 2 episode “The Odyssey of Flight 33”, about a jumbo jet lost in time, and bits of dialogue from that episode are apparent here as the same thing happens.  Future Doc Savage manages to travel back through his wormhole, even assisting in getting the lost airliner from 2014 safely on the ground, but then is faced with a ticking clock, and an unanswered question about how to get the jumbo jet back home where it belongs.  The Shadow appears, with his assistants Margo Lane and Lamont Cranston (long story, ask Stephen), and things get wacky quickly, with Howard Hughes getting stock tips from the future, and the appearance of classic Shadow foe The Voodoo Master, with nefarious intent.

THE BOTTOM LINE: DENSE AND LAYERED

There are a LOT of elements in play here, creating a story with lots of moving parts, and knowing the ephemera of The Avenger, Doc Savage, some real-world history and The Twilight Zone really helped me connect with the story, even as Uslan seems to have a bit more enthusiasm than experience.  Artistically, it’s a solid tale, with nothing that stood out as bad, and a couple of wonderful moments (The Shadow intimidating Lamont Cranston, as well as older Doc Savage face-to-face with Howard Hughes, who seems shocked at what the Doc has done to his hair.)  I don’t know whether this story will work as well for a new reader, but I found it to be a pretty enjoyable first outing for a historic team-up.  Justice Inc. #1 is taking a lot of influences and sticking them all together, but the synthesis works pretty well, and even though the pacing is deliberate, I didn’t feel like the creators were dragging their feet to pad out a trade, leaving us with a more than respectable 3.5 out of 5 stars overall.  I’m looking forward to seeing what other allusions and shout-outs might be in store, as well as more of The Avenger, but this issue makes a fine showing for itself in both story and art…