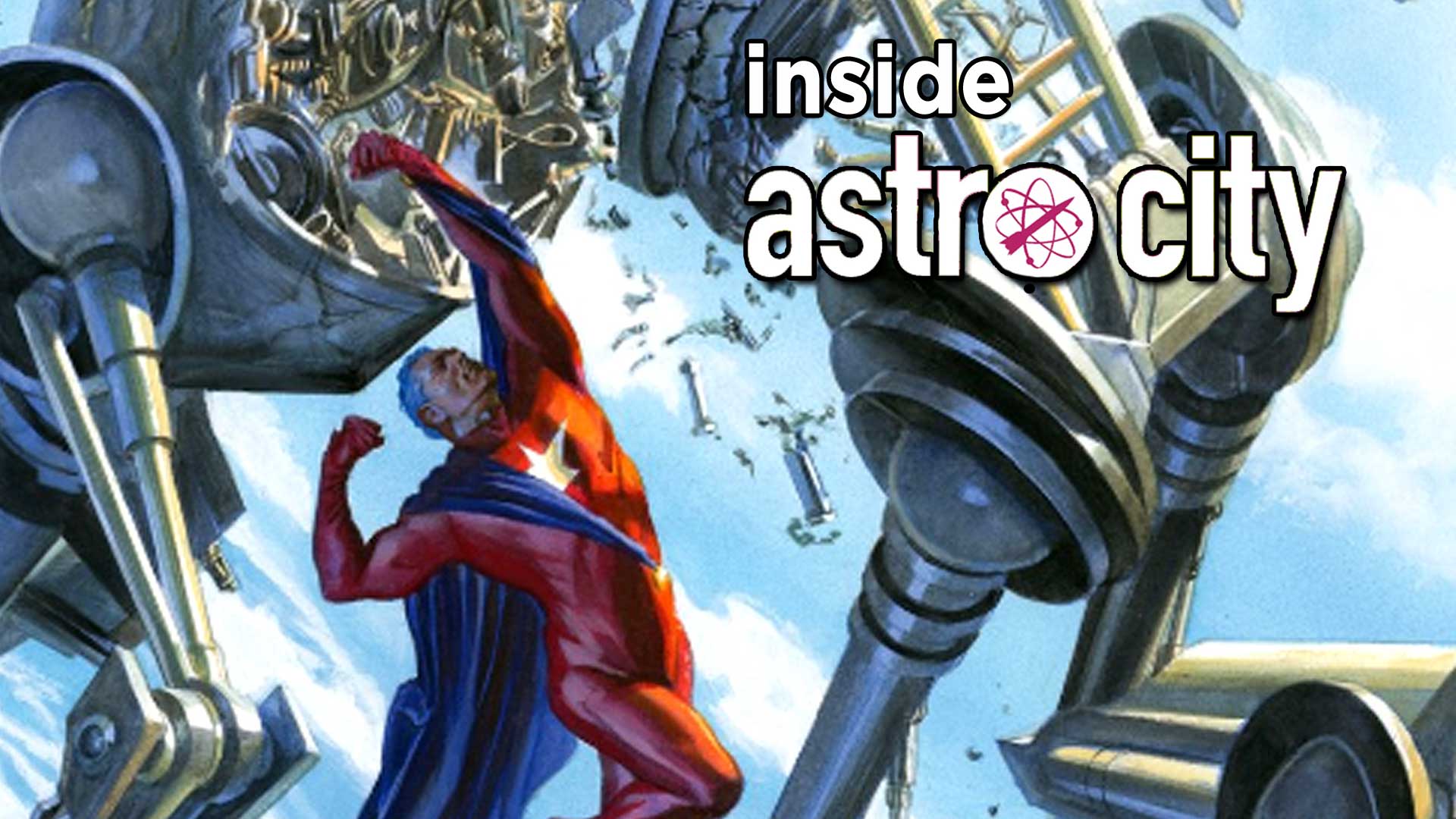 Inside Astro City #14 with Kurt Busiek

Welcome to Inside Astro City, a column focusing on the Vertigo Comics series Astro City from Kurt Busiek, Brent Anderson, and Alex Ross. Each month, we’ll take a look at the current issue of the series, and ask series writer Kurt Busiek questions about the book. Let’s jump into issue 14! Astro City #14: A roadside killer-robot sanctuary and museum? Only in Astro City. Meet Ellie and her very unusual friends. 1. Issue #14 deals with Ellie, an older woman who has created a familial relationship with robots that were created by villains. Where did the seed of this story come from?

Kurt Busiek: It originally started out in my mind as a young woman running an evil-robot sanctuary, like someone who’d collect stray dogs. Just part of me thinking about “what else is out there” in a superhero world. If there are animal sanctuaries in our world, is there something like that in ASTRO CITY, but with a superhero connection?

But since an evil-robot sanctuary probably wouldn’t be offering up robots for adoption to good homes, I was thinking about how she’d fund the thing, and the museum arose from there. And somewhere along the way, Ellie got a lot older, and got a complicated backstory, and the story grew out of that.
I actually came up with a bunch of stuff about Ellie and the robots that I didn’t manage to get into this story, so one way or another, I’ll have to revisit the idea. How hard that’ll be depends a lot on how next issue comes out, of course, but I’ll figure out a way to do it… 2. Several of the robots in this issue had very interesting names, including A-Taxx 7K and Gargantuax. Did these names come from robotic research or a love of science fiction machines?

KB:  Probably mostly due to my conviction that even background characters in ASTRO CITY need to be characters that the reader can easily imagine as foreground characters in their own stories. I mean, these are all robots that villains used in battle with heroes or other criminal acts, so that would have been a main, forefront adventure if it were presented in an ordinary comic book.

So the robots have to have names that sound like they belong in that big battle, that big adventure. You need to have a sense that there’s a history out there, and these guys belong in it.
I probably spend too much time obsessing about names — I want them to sound good, I want them to sound like they could be prominent characters in more-conventional stories and I want them to feel like they came from different periods, that some characters debuts in the 1960s, others in the 1980s and so on, and their names feel right for that.
But this is just the sort of thing I obsess about, and I think the results are worth it.

3. In this issue, we see a couple mentions of past events in Astro City. How fluid is the timeline for your book? Do you have it well mapped out in advance or are you constantly adding new scenes and dates?
KB: Brent once described the city map as “fractal” — we knew where all the main stuff was, but there’s enough room to fit in new neighborhoods or buildings or parks or whatever as we need them. The map doesn’t grow in size, but it grows in detail.
The history of Astro City is much the same — we know the big picture, and we know various important milestones along the way. But in between those milestones, there’s a whole world of characters — heroes, villains, ordinary people — and they have lives and adventures and incidents. So as we build a character’s history, we add to the storehouse of incidents. The history adds detail, fractally, but the overall shape stays the same. 4. Ellie shows kindness to Fred in this issue when all of us in the audience are yelling for her not to. When creating an unsavory character like Fred, do you find inspiration from real life and people? Or do they come from pure imagination?
KB: A mixture of the two. Fred’s based on a few people I’ve known, including a local house builder who drove his mother’s company into the ground in less than a year. But I don’t know that guy all that well, so that’s just a place to get a few details, to combine “what kind of character do I need for the story” with “how do I bring in enough detail to make the character feel true, feel human.” Writing characters of any sort is partly about inspiration, partly about observation and partly about story mechanics. Almost any character will be based — not necessarily on someone specific — but on behavior writers observe, and extrapolate from.
Pure imagination is all well and good, but you need some reality to anchor your characters to the world in a way that’ll let readers recognize them and empathize with them. Or against them, as the case may be.

5. The ending of this issue lets us know that Ellie has been betrayed and that her world may not be exactly what she thinks. Can you give the readers a one word hint about what is to come for her in next issue?

KB: I don’t suppose “Competency Hearing” counts as one word.

And that’s it! I hope you enjoyed this special look inside Astro City #14! A special thank you to Kurt Busiek for taking the time out of his busy schedule to answer our questions. If you haven’t had a chance to read Astro City, I highly recommend running down to your local shop and picking it up. Astro City #15: “Ellie’s Friends” part two. In the wake of last issue’s devastation, Ellie has to find a way to save her longtime friends and discover the truth about her past in the process. Plus: Honor Guard and the villainy of Vivi Viktor!