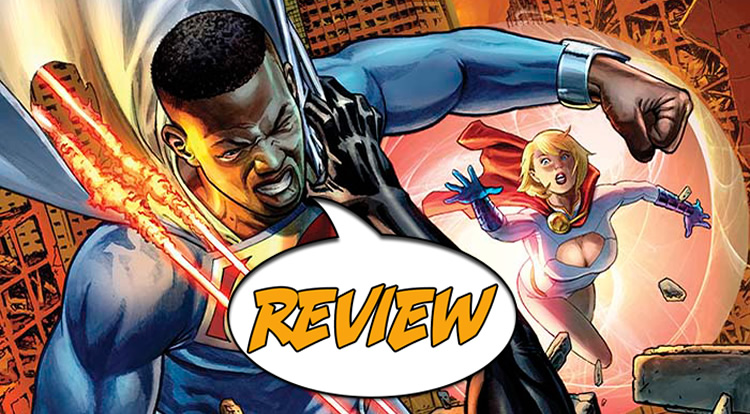 There’s nothing like a good surprise when reading a comic. Well, this issue of Earth 2 has not one, but at least two BIG shocks – at least, I thought they were big!

DC has always been criticized for having multiple universes, so for a while, the idea of reviving the Justice Society was shelved. Maybe what helped this time was not using that name and instead going with “Earth 2.”

Previously in EARTH 2:  “Val and Lantern battle Superman with Earth’s fate hanging in the balance when a familiar face arrives on Earth 2 via the Boom Tube to turn the tide!’”

A RECAP FOR THOSE WHO ARE COMING IN LATE

I know that some comics readers don’t like other universes. “I don’t know what’s going to take place in Earth 2,” one friend told me. “In the ‘regular’ universe, I know!”

See, that’s what I LIKE about Earth 2 and other universes. The rules don’t necessarily apply. Things happen that would NEVER take place in “our” world.

There’s been quite a long storyline going on regarding the invasion by Darkseid on this planet. It seemed that the “big three” heroes – Batman, Superman and Wonder Woman – gave up their lives to save the people of Earth 2. However, over time, Batman’s father Thomas Wayne took up the mantle while Superman has been working for Darkseid, it seemed.

TOM TAYLOR HAS BEEN HITTING IT ON ALL CYLINDERS

Tom Taylor has become one of the new breed of writers who can tackle both comics and video games. His Injustice: Gods Among Us has been popular among fans of comics, but it has also drawn some gamers into reading comics. That’s always a good thing! Not only that, his digital-first version has done very well on computers and in print.

Some folks have complained that we should never see Superman and Batman on Earth 2, instead focusing on The Flash, Green Lantern and the other Justice Society heroes. That never bothers me because we don’t quite know what’s happening.

By re-introducing Superman and Batman, Taylor has given them their own “spin,” as it were. Superman has appeared to be under the control of Bedlam, a telepath, while Thomas Wayne makes Bruce Wayne look mild in comparison.

I also like that Lois Lane is the Red Tornado. I’m anxious to see more of her as a super hero! I’m also enjoying seeing the new Superman as he brings fascinating character traits to the Man of Steel we haven’t seen.

Taylor does a great job of keeping the pacing strong and moving. This is actually a case of something having the “feel” of a video game that works for me!

As I mentioned, this issue has two shocks that still have me stunned. Am I going to reveal them on a site named “MajorSpoilers?” Not a chance – you need to get the book and read them for yourself. Let’s just say that something happens that has to do with water that should have been done a LONG time ago, and the other is a revelation that not everyone is exactly who they seem to be! Wow!

Nicola Scott’s pencils and Trevor Scott’s inks visually work well with Taylor’s script. I also like that the costumes of Superman and Batman have been darker, just as the character’s have become that way.

Then, too, I’ve liked how the other “Wonders” have different takes on their costumes on Earth 2, making them also different from the Flash and Lantern that we’ve been used to on “Earth 1.”

It’s a great way to make Earth 2 something special, in my opinion.

I’ve enjoyed this title ever since it debuted, and even with Mr. Taylor taking over the writing from James Robinson, I feel the quality has remained excellent.

During September, there will be a Future’s End tie-in issue, followed by issue #27 in October.

However, change is in the wind for Earth 2.

The series explores the fallout of an invasion by the hordes of Apokolips, as a small handful of heroes make their final stand. The weekly series will kick off this October. At this point, there’s no final word on if this weekly will replace Earth 2 and World’s Finest, but look for more word in the near future.

However, don’t miss this issue since it’s a great one! Really and for true!