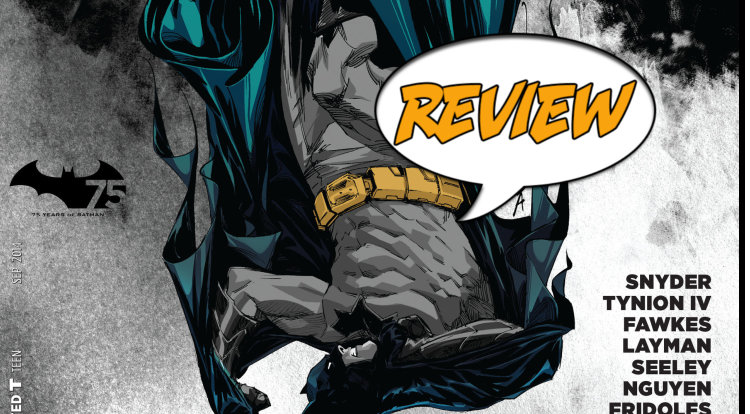 Deacon Blackfire features heavily in Batman Eternal #17 with a plotline that has little to nothing to do with the titular character. A LOT OF BUILD UP

Batman Eternal #17 focuses a lot of its attention of Deacon Blackfire who appears in the New 52 universe as very much a watered down version of his original incarnation. Deacon Blackfire has Batman captured and seems fixated on drugging him in order to have him murdered by a bunch of equally-as-drugged homeless people. This is supposed to the be the impetus for Batman allowing something terrible to happen to Blackfire at the end of Batman Eternal #17 in what reads as a truly un-Batman-like move. This entire arch reads as forced and strained throughout the issue and doesn’t fit with any of the other stories readers encounter. This leads me to conclude that it was a plot point the writers needed to hit by this issue that has been shoehorned in here for lack of anywhere else to put it.

Detective Corrigan and Batwing are stranded with the supernatural elements handled in Batman Eternal #17 – the best part about their interactions being Batwing’s growing apprehension at the creepy crawlies and the banter they toss back and forth even as the darkness presses in around them. It’s almost nice when, later on, Corrigan’s resolve – in regards to the supernatural – cracks in the wake of pressing danger. The partnership that has been developing between Batwing and Corrigan in recent issues continues in its Batman/Gordon similarities, but hits all the right beats so as to be truly enjoyable. In spite of the needless appearance of the Joker’s Daughter, this arch was probably the best executed in Batman Eternal #17.

The last storyline of Batman Eternal #17 features Tim Drake’s Red Robin, Harper Row as proto-Bluebird and Sergei Alexandrov. There’s not a lot that happens here other than Alexandrov being a batty old man (forgetting names that have already been mentioned, changing his opinion towards characters and being needlessly cryptic), and Harper electrocuting a genetically enhanced monkey. It would have been nice to see Red Robin get a chance to do some real detective work (say, by having Harper distract Alexandrov), or making some brilliant deductions based on what Sergei was – and was not – saying.

To conclude, Batman Eternal #17 is setting up a lot of scenes that will unravel as the weekly series progresses. This issue, in particular, was better than many that have come before, but that’s not really saying a lot.

Dustin Nguyen is an awesome Batman artist. His work in Batman Eternal #17 is ethereal and haunting that way all great Batman books ought to be. The flashbacks to Deacon Blackfire’s work three years previous is the artistic highlight of the issue without a doubt. Arkham Asylum looks downright frightening with his pencils and Nguyen’s linework deserves to be presented to video game developers for inspiration in any future Batman: Arkham games.

That being said, I’m not in love with the way he draws Tim Drake. Leaving the absurd New 52 Red Robin costume aside – this Tim Drake takes a lot of nods from Damian Wayne’s old design. Tim appear perpetually petulant (perhaps to match his somewhat out-of-character snipes throughout the issue?). He’s a bit lean in the face for my liking, especially when readers consider the fact that Tim is about 17 years old (at the oldest), whereas in Batman Eternal #17 I would guess him to be closer to 14. Ages are difficult to illustrate in comics to be sure, but Tim Drake was the one who stood out the most starkly to me.

As for Batman himself and Gotham City – an ever-important character in the Bat Mythos – Nguyen is on his A-game presenting the strange stories that populate Batman Eternal #17 to his audience. Tortured Batman is nothing short of astounding.

Batman Eternal #17 is for people who have read the series up to this point and are going to stick with it to the bitter end. It is a bit difficult to jump right into without any previous knowledge of the series and doesn’t have enough going on inside 22 pages to make picking it up out of nowhere really worth it.