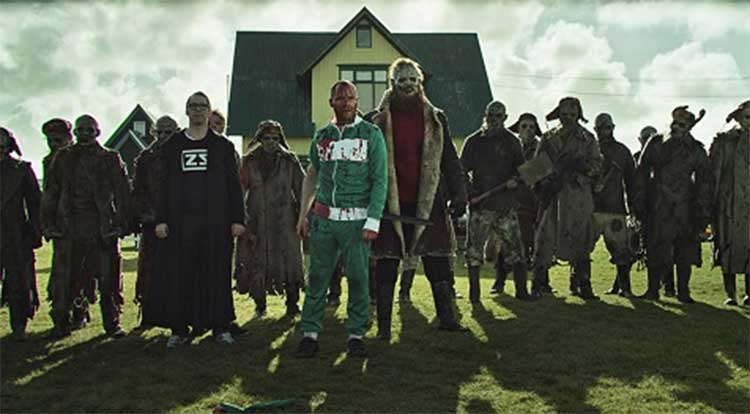 “We could not be any more thrilled to partner with Bruce Campbell on this festival”, said fest director & programmer Josh Goldbloom. “From the ground up, we’ve been able to design a world class slate of independent films that share the same sensibilities of his eclectic work.” Film programmer Scott Weinberg added, “Bruce Campbell is a genre movie hero. We think fans will be excited at many of the discoveries and festival favorites we’ve lined up to screen.”

The festival will take place at the Donald E. Stephens Convention Center in Rosemont, the Muvico Rosemont, and inside the Dome at Rosemont Ballpark.

Tickets for ALL screenings are free to attend with admission to Wizard World Chicago Comic Con. A limited number of festival badges, with exclusive access to the screenings, are on sale now for only $50. Badges for the festival can be purchased through www.theawesomefest.com & www.wizardworld.com.

The direct link to the ticketing page can be found here: http://wizardworld.ticketleap.com/awesomefest.

Early next year, March 6-8, 2015, Bruce Campbell will return to Chicago to emcee his recently announced Horror Fest, also presented by Wizard World Chicago. Fans can expect to see some of their favorite genre stars, directors and writes from great television shows, movies, graphic novels, and comics.

KILLERS
Chicago Premiere
(Directors: The Mo Brothers, Writers: Takuji Ushiyama, Timo Tjahjanto) A dark look into the minds of two men with nothing in common: Nomura, a self-obsessed serial killer residing in Tokyo and Bayu, a failing journalist who lives in Jakarta. Connected through a series violent incidents, both men inexplicably start to feed off each other. (Not literally). Co-directors “The Mo Brothers” (Macabre, V/H/S/2) deliver an epic tale that works as action, suspense, and disturbing horror at the same time..

ASMODEXIA
North American Premiere
(Director: Marc Carrete, Writers: Marc Carrete, Mike Hostench) Written by Mike Hostench (Deputy Director of Sitges Film Festival), Asmodexia documents five days in the lives of an exorcist and his granddaughter working in the Barcelona area. If you think you’ve seen every exorcism angle imaginable, prepare to be surprised. And a little grossed out.

EXTRATERRESTRIAL Chicago Premiere (Director: The Vicious Brothers, Writers: The Vicious Brothers) A group of friends on a weekend trip to a cabin in the woods find themselves terrorized by alien visitors, who promptly chase everyone all over the place. So it’s a slasher movie, a suspense thriller, and a pretty gruesome alien abduction tale all at once. Plus it’s got some solid humor and an amazing final shot. From the directors of the found footage horror flick Grave Encounters. Oh, also Michael Ironside pops up!

DEAD SNOW 2: RED VS. DEAD (Director: Tommy Wirkola, Writers: Stig Frode Henriksen, Vegar Hoel, Tommy Wirkola)
If the worst day of your life consisted of accidentally killing your girlfriend with an axe, chain-sawing your own arm off, and watching in horror as your closest friends were devoured by a zombified Nazi battalion, you’d have to assume that things couldn’t get much worse. In Martin’s case, that was only the beginning. From the director of Hansel & Gretel: Witch Hunters and (of course) Dead Snow.

CYBERNATURAL
Special Screening
(Director: Levan Gabriadze, Writer: Nelson Greaves)
While video chatting one night, six high school friends receive a Skype message from a classmate who killed herself exactly one year ago. A first they think it’s a prank, but when the girl starts revealing the friends’ darkest secrets, they realize they are dealing with something out of this world, something that wants them dead. Told entirely from a young girl’s computer desktop, Cybernatural redefines ‘found footage’ for a new generation of teens. From producer Timur Bekmambetov (Night Watch, Wanted).

INNER DEMONS
Chicago Premiere
(Director: Seth Grossman, Writer: Glenn Gers)
Inner Demons follows an ‘Intervention’-style reality show crew that films an episode about a sixteen-year old girl, a former A-student, who is fighting addiction but may in fact be suffering from something even more destructive: demonic possession. Director Seth Grossman was a producer on A&E’s award winning series “Intervention,” which certainly lends an air of authenticity to a gradually more unpredictable horror story.

MEET ME THERE
Chicago Premiere
(Director: Lex Lybrand, Writer: Brandon Stroud)
After several years of sexual dysfunction, Ada and her boyfriend, Calvin travel to her hometown in rural Oklahoma in the hopes of piecing together her fragmented childhood memories. They find their answers, but can they find their way back home? Starring WWE’s Goldust & DC Comic’s Jill Thompson.

Interactive Panels:
BRUCE CAMPBELL VS. THE AUDIENCE
Best known for his roles on the big screen in cult classics Army of Darkness and Evil Dead, as well as his role as Sam Axe in the hit TV series Burn Notice, Bruce Campbell has proven to be a force to be reckoned with as an actor, director, and author. Don’t miss your chance to ask him your most interesting questions as he makes an appearance at Wizard World Chicago Comic Con.

A CHAT WITH JOHN CARPENTER
Join us for this very special occasion as we honor the Master of Horror with a conversation spanning his entire career.

THE MANY TALENTS OF JON SCHNEPP
(Metalocalypse, Dethklok, The ABC’s of Death, The Death of “Superman Lives”: What Happened?)
Death Metal is the horror genre of the music industry and Adult Swim’s Metalocalypse may just be its greatest tribute ever. Join us as we chat with one of the masterminds behind that show (and so much more), as well as his discuss his upcoming feature: The Death of “Superman Lives.”

THE EVIL DEAD MARATHON!
The Evil Dead (1981), Evil Dead 2 (1987), and Army of Darkness (1992)
You’ve almost definitely seen the Evil Dead movies before, but we guarantee you’ve never seen them like this! Join us under The Dome at Rosemont Ballpark as we screen the original entire Evil Dead trilogy on a giant 30 foot movie screen.
Special surprises, and guests TBA. This marathon is completely FREE for all to attend! No badges or Wizard World ticket necessary.

ABOUT THE AWESOME FEST: Recognized for their unique events and innovative approach to programming, The Awesome Fest was created as an outlet to bring the most cutting edge and just plain awesome titles from both the independent festival circuit, as well as Hollywood’s finest, to play some of the more unique venues and non-traditional spaces in the city of Philadelphia. Since the Summer of 2010, The Awesome Fest outdoor summer series has showcased well over 200 Philadelphia Premieres, musicians, and stand-up comics, completely FREE to all who attend.
For more information, please visit: www.theawesomefest.com