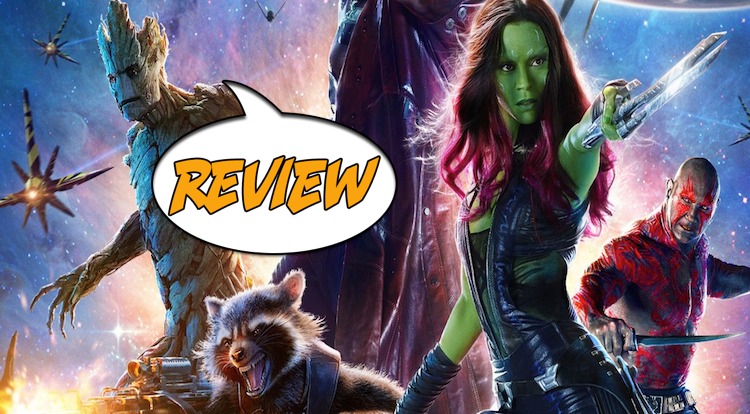 Guardians of the Galaxy Review

Guardians of the Galaxy, the newest Marvel movie hits theaters this weekend. Will it be another Marvel blockbuster? More importantly, is it any good? Read of Spoilerite to find out! It’s finally here! Get your first “I Am Groot,” more Rocket, Drax and Gamora in action, and the usual Peter Quill swagger in the second full trailer for Marv…

A HEROIC GROUP OF LOSERS

At its core, Guardians of the Galaxy is about a group of losers who find each other and become friends. There’s more to the story than that of course, but it’s touched upon at one point how each character has lost something or someone. It was this moment that made me realize that Guardians of the Galaxy was something special, and possibly one of Marvel’s best films to date.
Peter Quill a.k.a. Star Lord (Chris Pratt) is a human scavenger, stealing relics and items and selling them to the highest bidder. When he steals the Orb, a device hiding one of the Infinity Gems, all hell breaks loose. Thanos and Ronan, other bounty hunters and the Nova Corps all want to get their hands on it for various purposes.

I know nothing about Guardians of the Galaxy, so my experience is what I’m sure the average movie goer’s will be like. The Orb is your typical MacGuffin, the item used to bring all the characters together, and it felt natural. Rocket Raccoon and Groot are after Quill for the bounty on his head, Gamora to retrieve the stone which leads to them all meeting Drax in prison. Seeing the team not wanting, but needing to work together was great and the interaction between each is fun and humorous. In fact, Guardians of the Galaxy is Marvel’s funniest movie yet. It’s not a straight comedy but it has a light hearted mood and is a blast to watch. The story is somewhat easy to follow, but there is a lot of talk about different races, such as the Kree, delivered quickly and in abundance. No real effort is made to clarify these things and I felt lost at the beginning, leaving me worried that I might not enjoy the film. Once things get going, it’s easier to get into and follow. When the group realizes that they’re all friends and the only have each other, it’s a touching moment and the best of the film. The action is well done and most effects are amazing. I appreciated the use of some practical sets but they don’t mix well with the CG backgrounds, giving some scenes an unnatural look. The final spaceship shootout is impressive, though I was disappointed with how Ronan was defeated. It was too convenient and made little sense.

Most of the Guardians cast does a great job with stand out performances being Bradley Cooper and Vin Diesel, which is funny considering each only lends voices to their characters. I was concerned that I would be distracted by Cooper’s voice, only hearing him and not Rocket as a character. Cooper uses a Jersey/New York type accent that made him almost unrecognizable and impressed me quite a bit. Vin Diesel puts more emotion into three words (I am Groot) than some actors can put into whole performances. Chris Pratt is a good leading man and is able to handle action as well as the comedy he’s known for. Zoe Saldana and Dave Batista do a fine job as well though nothing about either performance stood out for me. Some other characters seemed over the top, to the point where I was reminded of Jon Lovitz’s “Acting!” Lee Pace’s take on Ronan suffers from this most and every line is said with a strange emphasis of importance. To get the average audience member caught up, there are sections of dialogue that are very exposition heavy and unnatural, clearly put there to explain the goings on. Michael Rooker is good but is basically playing every hillbilly character he’s ever played before, only this time blue and Karen Gillan’s Nebula is upsettingly bad and over dramatic. Thanos was a real treat and you can see a lot of Josh Brolin in the face and performance, but his voice wasn’t what I’d imagine Thanos’s to be. Stan Lee gets his obligatory pay check, I mean cameo but I was more pleased to see Lloyd Kaufman in the prison scene. Movie buffs will know him as one of the founders of Troma Entertainment, one of the first studios to give James Gunn a job. Overall, the good far outweighs the bad and I could easily sit through a Rocket Raccoon and Groot movie all by themselves.

Guardians of the Galaxy is a fun space adventure, something we haven’t quite gotten in a while, and certainly a first for the Marvel cinematic universe. It’s an action packed and funny movie that many should enjoy. While the story is good, I worry some elements may confuse the average movie goer and I hope it doesn’t affect later box office performance (which I doubt). Rocket Raccoon and Groot are clear standouts and sure to be favorites among many. This is sure to be another Marvel hit and I suggest seeing it in the theaters as the space battles are huge and impressive. I won’t spoil the post credits scene but, suffice to say, it quacked people up. Guardians of the Galaxy gets 4 out of 5 stars.