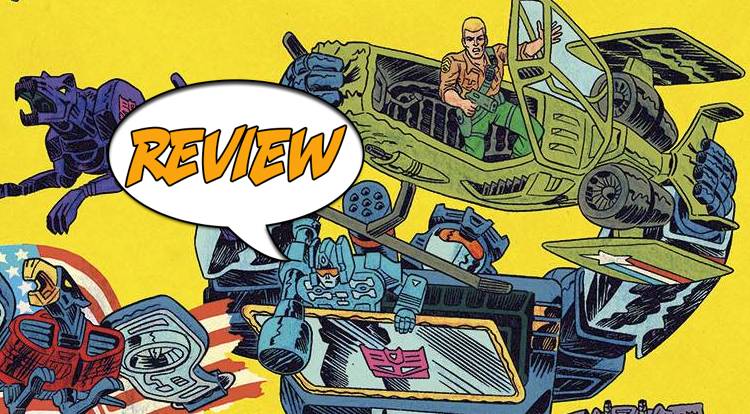 Previously in Transformers vs. G.I. Joe: G.I. Joe is America’s special task force responsible for protecting the world from threats such as Cobra.  Transformers are sentient alien robots with the ability to change into vehicles.  This is what happens with the two meet.

The simplest way to describe Transformers vs. G.I. Joe #1 is to imagine what a five year old Transformers and G.I. Joe fan would want in a comic.  Tom Scioli and John Barber have basically written a love letter to the franchises.  It’s a simple start, one that is continuing from the Free Comic Book Day issue, with the Joes meeting Soundwave, his cassettes and Shockwave.  Things don’t go as peacefully as the Joe’s expected, fighting breaks out and by the end Laserbeak and Frenzy meet Cobra.  In a nice twist, the Joes are secretly traveling to Cybertron, which is slowly entering Earth’s orbit.  That ending was something I found unique as we’ve usually seen the two meet on Earth.  This promises some interesting events as the Joes will be the ones on foreign territory for a change.  Hardcore G.I. Joe and Transformers fans will find lots of things to love like the battle in Springfield and Ravage having a voice.  Even the dialogue feels stripped right out of the old Marvel issues.  Five year old Chris loved this issue but the adult still found problems.  While I appreciated the “retro” voice Scioli gives the characters, it often times comes off as silly.  It’s a far cry from the other more serious Transformers and G.I. Joe comics IDW is putting out and those looking for something similar are going to be disappointed.  There is also no recap, so readers who didn’t pick up the FCBD issue will have no idea how or why Snake Eyes lost his face and is living in the woods.  All in all, it ends up being a fun read for fans of Transformers and G.I. Joe, especially those of the early Marvel runs.

Reactions I’ve heard to Tom Scioli’s art range from liking it to loathing it, going as far as to call it ugly.  It’s certainly a unique style and one that I haven’t seen in modern comics before.  Like the story, it harkens back to the books from the ’80s and I felt like I was looking at a slightly morphed version.  Each page and panel is packed to the brim with characters and vehicles from the cartoons and toys along with an energy and spirit throughout.  Even so, I can’t honestly say it’s good art and certainly understand people’s complaints.  Scioli is clearly trying to resemble the original comics in his own way and in that respect, succeeds.  His figures and shapes look very, very off and have curvy squiggles all over.  Your feelings on the art will be what makes or breaks the book for you.  There are a couple instances where some better editing and proofing could have occurred.  A word balloon overlaps another in a panel, making the other partly unreadable and the same thing happens with the art.  They’re mistakes that are unforgivable for a mainstream comic such as this and were disappointing to see.  I still give Mr. Scioli credit for taking on so many tasks in one book.  It’s quite impressive.

How much you will like Transformers vs. G.I. Joe #1 depends on two things: your love of the properties and feelings about the art.  There’s enough nostalgia here for old time fans to go nuts over but the art style is a deal breaker for some.  Fans wanting to feel like a kid in 1984 again may want to pick this one up.  I personally had a blast and will now be spending the next hour playing with toys.