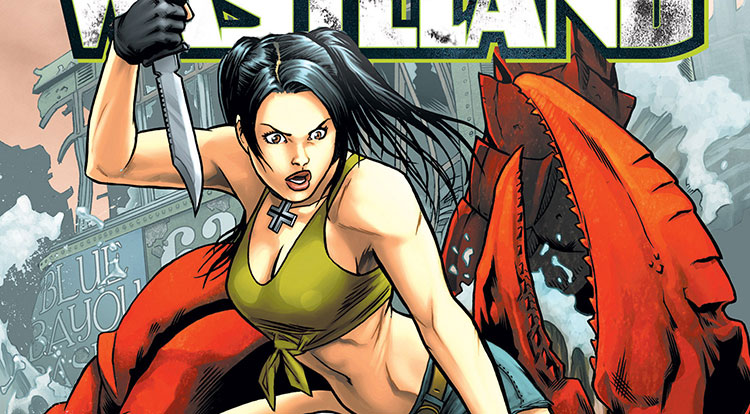 SNEAK PEEK: Sally of the Wasteland #1

Titan Comics sent Major Spoilers a sneak peek of this week’s Sally of the Wasteland #1 that looks to be all sorts of pretty mixed with giant silverfish.

Southern Louisiana, 82 years after the Fall. The apocalypse has come and gone, leaving behind a withered, ravaged landscape of wreckage and mutant crawfish. Still, you gotta laugh, and Sally does, often using her beloved shotgun, Bertha, as the punchline!

Inspired more by lust than common sense, and by a teenage desire to protect Tommy, the object of her desires, Sally leaves her bar job and joins the deranged crew of the Mississippi Duchess on a mission into the remains of New Orleans.

Saving the remains of civilisation plays second best to keeping her sweetheart safe as our smart and sexy princess of the wild frontier runs a gauntlet of gigantic genetic freaks and roving gangs of blood-hungry barbarians!

The ever-so-cute but ever-so-slightly-insane Sally is the wayward daughter of writer Victor Grishler (X-Men, Angel & Faith, Noir) and artistic up-and-comer Tazzio Bettin. This first issue in a fantastic new series proves Armageddon can be fun!