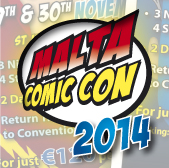 Wicked Comics are proud to announce that internationally renowned mangaka Yishan Li (The Clique), and acclaimed comic creators Rufus Dayglo (Tank Girl) and Andrew Wildman as first guests for the Malta Comic Con (MCC) 2014 which will be held on Saturday 29th and Sunday 30th November at St. James Cavalier (all floors), Valletta, between 10am – 6pm on Saturday and 11am – 7pm on Sunday. Yishan Li:
Yishan Li is a professional UK/Chinese manga artist currently living in Scotland. Besides a large number of “how to draw” tutorial books, her work has been published in China, France, the UK and the USA and have also been translated in many languages. Her impressive resume includes L’ Accro du Shopping a French graphic novel adaptation of Sophie Kinsella’s famous novel Confessions of a Shopaholic which was also adapted in a movie starring Isla Fisher, Cutie B, Les Contesse du Boudoir Hate’ (which is based on traditional Chinese ghost story book: Liaozhai Zhiyi), The Clique; an adaptation of the #1 the New York Times best selling series of the same name, and Will Supervillians be on the Final. She is currently working on a new graphic novel titled Girl 1 and a new as yet untitled story based on the life of Princess Diana. Rufus Dayglo:
Rufus Dayglo is a Northern Irish professional comic artist based in London and is best known for re-launching Tank Girl back into the world. Before moving into comic art, Rufus worked in the animation industry on feature films, storyboarding and various commercials and was also one of team working on pop promos for the popular band Gorillaz. He has worked for a number of comic book publishers including Image Comics, IDW, 2000 AD, Ankama Editions, Titan books, and DC Vertigo books and on popular titles and characters such as Judge Dredd, Future Shocks, Snaked and Metal Gear Solid 2: Sons of Liberty the graphic novel spin off of the popular video game. He is currently launching his own series, Solid Gold Death Mask in partnership with Ashley Wood’s 3A Company, as well as working on an upcoming split comic with Ashley for IDW Comics. Andrew Wildman:
British creator Andrew Wildman has been an illustrator for Comics, Games and TV for 30 years. He has worked on a number of popular titles including Thundercats, The Real Ghostbusters, Power Rangers, G.I. Joe, the X-Men, Spider-man and Venom but is perhaps best known for his long association with Transformers. TV works includes, character designer for the animated TV show Legend of The Dragon, production designer for the children’s animated TV show The Matt Hatter Chronicles and storyboard artist for the BBC on The Fades, The Interceptor and Doctor Who. He is also currently working for a number of new TV shows including an animated one with Transformers writer Simon Furman. Wildman is also the author and illustrator of a new graphic novel Horizon which has been described by BBC Arts Editor, Will Gompertz as “An intriguing book that tells a great story in four wonderful dimensions: words, pictures, speech and space”.

“We’ve heard nothing but praise from previous guests on Li, Dayglo and Wildman, and we cannot help but feel excited that they are going to bring their unique and distinctive talents to our show. The diverse and acclaimed work they have all been involved in will certainly appease the Maltese comic fans and we’re proud to welcome them to the Malta Comic Con family. We would also like to take this opportunity to thank them for accepting our invitation and for the role they will play in making MCC 2014 the best yet!” said Chris Le Galle co-founder of Wicked Comics.

As customary Wicked Comics have designed a number of packages for fans wishing to travel to the Malta Comic Con from abroad, which include heavily discounted accommodation rates and local transport from hotel to convention centre. Similarly Wicked Comics have a number of packages tailored for foreign creators who wish to exhibit at the Malta Comic Con including heavily discounted tables.