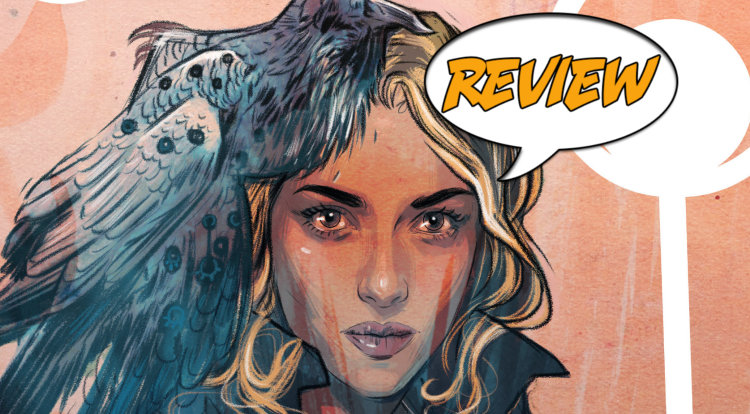 I’ve never read Supreme possibly because Superman and his analogues have never really been my thing and possibly because I was an actual child during the comic’s first run. I’ve come into this issue – Supreme Blue Rose #1 – with none of the pre-existing knowledge that long term fans and readers will have, but I’ve very much enjoyed this first issue.

As with many first issues penned by Warren Ellis, there are points throughout Supreme Blue Rose #1 where the scale of storytelling is so great it’s difficult to tell what is going on. Seeds are being planted throughout the issue destined for payoff at a later date if you are either a patient reader or a trade waiter. The protagonist is Diana Dane – unemployed investigate journalist – who dreams of a dystopian future that leaves her with a cryptic message about her present day life:

But, that was just a dream right? A few short pages further into Supreme Blue Rose #1 Diana and the readers meet Darius Dax himself. He is handsome, well-known and deals in secrets and – despite being American – comes off very much as a Professor Moriarty-inspired character in all the best ways possible. Darius has a possession – a very large arch with the word SUPREME carved into it – that was recently dropped on a small town. A man named Ethan Thomas is thought to be responsible for this bizarre event and for some $10,000.00 Darius wants Diana to investigate this connection.

The allure and desperate need for a cash flow forces Diana to make the decision about whether or not to work for Darius – even when taking her premonition into consideration.

One of the best things about Supreme Blue Rose #1 is that is reads like a Warren Ellis book, which is sure to open this series up to a new audience from those who read the original series under Rob Liefeld. There are certain to be readers who drop off in the first few pages for how dense the mythology is, but Diana is likeable enough and Ellis is a masterful enough storyteller of the comic book medium that they pay off will be worth it, even if that doesn’t come until the tenth issue.

I truly enjoyed the slow, deliberate world-building of Supreme Blue Rose #1 and think that readers willing to trace the path being laid will as well.

For the vast scope Supreme Blue Rose #1 in preparing to explode into there is no better artist than Tula Lotay for the job. Diana and every other character are pop-art beautiful, but Lotay manages to question the validity of their beauty in her additional linework with panel featuring scratchy line or slashes through various pieces of scenery of characters seemingly without design. The entire design of Supreme Blue Rose #1 is indicative of layers up layers upon layers of possible realities the characters and narrative are living within.

The overall tone of Lotay’s work throughout Supreme Blue Rose #1 is that of an other-worldly scope that could very well be a powder keg.

Supreme Blue Rose #1 is handled with effortless mastery by its creative team, seemingly requires no prior knowledge of the original series, and has laid out many building blocks for readers to pick up and carry into the rest of the series run. If you can dedicate yourself to another independent comic series Supreme Blue Rose #1 is a great issue to start with.