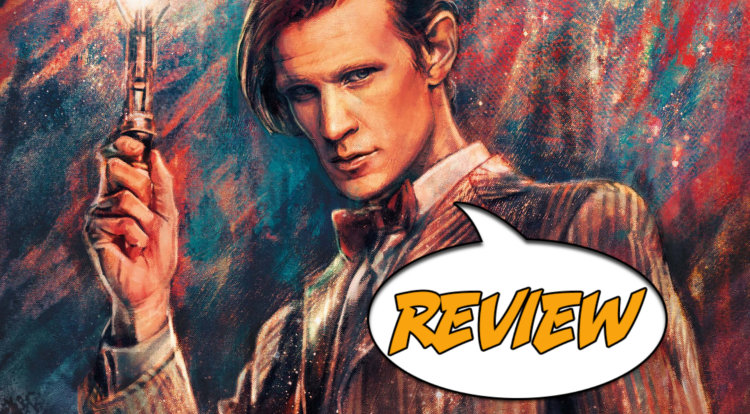 Doctor Who: the Eleventh Doctor #1 Review

In reality 2.0 where the Ponds live and get a beautiful honeymoon the Eleventh Doctor trundles through the life of a new companion. FROM GREY TO RAINBOW DOG

This new Doctor Who comic series out from Titan Comics sets the Eleventh Doctor on a series of adventures in reality 2.0 where the Ponds are still alive and on the honeymoon they always deserved. Doctor Who: the Eleventh Doctor #1 opens with the introduction of a new character – Alice Obiefune. Everything about Alice’s life is grey from the London landscape to her emotional state following the recent death of her mother to her apathy when it comes to her job as city library assistant. To say that Alice is suffering a mid-life crisis at the hands of writers Al Ewing and Rob Williams in a bit of an understatement. It is not only raining, but pouring on Alice’s life and every ounce of joy has been sucked out of it.

A few more pages into Doctor Who: the Eleventh Doctor #1 Alice wonders to herself if she ought to seek out a Doctor and is rewarded by nearly being run over by a gigantic rainbow space dog – and it only goes up from there! In true Eleventh Doctor style the bow-tied Time Lord demands immediate assistance of Alice with blatant disregard for her potential qualifications as a companion.

To her credit as a character – and the writing team of Ewing and Williams – Alice throws herself into this adventure without any of the comments long time Doctor Who fans have come to expect from new companions. When, in Doctor Who: the Eleventh Doctor #1, she is brought into the TARDIS Alice remarks that everything is upside down rather than on its incredible scale and size.

As for the titular Doctor himself Ewing and Williams have nailed Matt Smith’s delivery and quirks of speech – as much as writers can from a word balloon – giving him moments to comment on how “Cool” things are, how “clever” Alice the Librarian is and to express self-doubt over which of them can be the most “cryptic”. Doctor Who: the Eleventh Doctor #1 has a charming baby giraffe as their Doctor excellently paired with a female protagonist of great sadness, but extreme intelligence and emotional depth.

The plot of Doctor Who: the Eleventh Doctor #1 is not necessarily the most amazing Doctor Who adventure that I’ve ever experienced in any medium, but it focuses on presenting a time-and-space escapade set in [questionably]modern day England the events of which teach the companion something about herself and provide the Doctor the chance to be both teacher and crazy plot device.

There is also a cute back-up at the end of the issue penned and drawn by Marc Ellerby that presents the Ponds watching River go off on a date with the Doctor and hits the main points of a familiar scene.

Simon Fraser is a great choice to take on the art duties of Doctor Who: the Eleventh Doctor #1. He has a loose style of linework that feeds the timey-wimey sensibility I am certainly looking for in a Doctor Who comic book. The Eleventh Doctor looks more or less like Matt Smith, but he’s not overly photo-referenced which – at points – might be distracting to readers looking for a strict carbon copy.

Fraser throws enough familiar London landmarks into Doctor Who: the Eleventh Doctor #1 that helps to ground readers familiar with the landscape in this adventure in the real world – albeit in reality 2.0. His art really shines when readers get to see the rainbow dog and the inside of the TARDIS. Everything extraterrestrial is so starkly out-of-this-world that it can be described as nothing short of delightful. It is my hope that in the coming series Fraser is given man more chances to display his aptitude for this particular niche.

Doctor Who: the Eleventh Doctor #1 is a good looking issue.

Doctor Who: the Eleventh Doctor #1 has been solely crafted for fans of the Doctor Who series and will probably not be enjoyed by readers who are not – at the very least – familiar with the latest incarnation of the Doctor. If you are one of these people then this issue is fun, promising and worth your time to pick up and read.