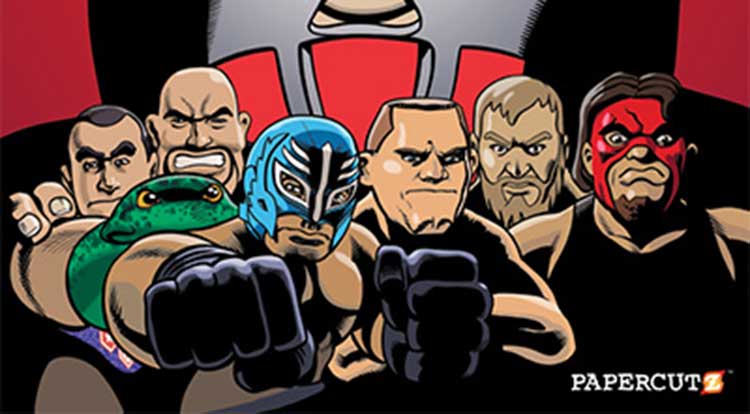 Based on the hit animated series featured on the WWE Network and multiple online platforms, WWE SLAM CITY recounts the humorous adventures of popular WWE Superstars like John Cena, Kane, and Rey Mysterio after they’ve been fired from their regular jobs by a mysterious character known as “The Finisher”. Forced to find employment in the real world, the Superstars end up performing jobs like auto mechanic, crossing guard, and lunch lady. The series depicts the hilarious consequences as these sports entertainers put their skills to work in everyday situations. Since its debut, SLAM CITY has proven wildly popular, amassing over 3 million views online and spawning a successful toy line from Mattel.

“Like Papercutz, the WWE believes in reaching out to fans of all ages,” said Papercutz Editor-In-Chief Jim Salicrup. “And we all know that when kids like something they just can’t get enough of it. Our new graphic novels will help expand the SLAM CITY universe and give kids new stories and adventures featuring these extremely popular versions of their favorite stars.”

Written by Mathias Triton and penciled by versatile artist Alitha E. Martinez (BATGIRL, WWE SUPERSTARS), the first volume of the series features an array of WWE Superstars including Big Show, Santino Marella, and Randy Orton as well as the aforementioned Cena, Kane, and Mysterio. Previews of the series will be available for viewing at the Papercutz booth at Comic-Con International and attendees will also be able to pick up some special promotional items — business cards for the newly employed Superstars!

”Part of the fun of putting these books together has been working closely with Mattel and the WWE,” explained Papercutz’s VP of Marketing Sven Larsen. “They’ve been great partners and with their help, we’ve created unique items available at this year’s Comic-Con.” Business cards featuring John Cena, Daniel Bryan, Kane, and Rey Mysterio will be given out at both the Papercutz booth (#2546) and the Mattel Booth (#3029) on Thursday and Friday of the show.

“WWE SLAM CITY is the perfect companion to our WWE SUPERSTARS series,” noted Papercutz publisher Terry Nantier. “Papercutz is dedicated to publishing the most diverse range of graphic novels and reaching as many readers as possible. With this new addition to our lineup, we’ve got the chance to not only create a whole new generation of WWE fans but a whole new generation of graphic novel fans as well. Are we excited about that opportunity? As Daniel Bryan would say, ‘YES!’”

ABOUT WWE: WWE, a publicly traded company (NYSE: WWE), is an integrated media organization and recognized leader in global entertainment. The company consists of a portfolio of businesses that create and deliver original content 52 weeks a year to a global audience. WWE is committed to family friendly entertainment on its television programming, pay-per-view, digital media and publishing platforms. WWE programming is broadcast in more than 150 countries and 30 languages and reaches more than 650 million homes worldwide. The company is headquartered in Stamford, Conn., with offices in New York, Los Angeles, Miami, London, Mumbai, Shanghai, Singapore, Istanbul and Tokyo.

Additional information on WWE (NYSE: WWE) can be found at wwe.com and corporate.wwe.com. For information on our global activities, go to http://www.wwe.com/worldwide/.