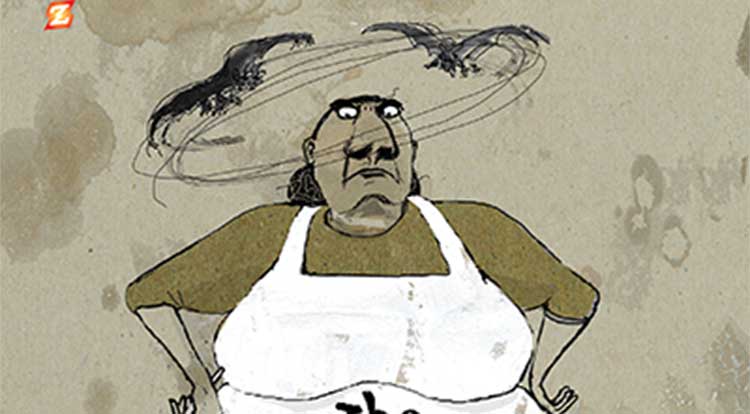 SDCC’14: The Lunch Witch brings her magic to Papercutz

Who says there’s no magic left in publishing?

Papercutz, the industry’s leading all-ages graphic novel publisher, is well known for their successful licensed publishing line. In addition to translating and publishing strong European properties like ARIOL and GERONIMO STILTON they’ve originated material for hit licensed characters like LEGO NINJAGO and NANCY DREW. They’ve also produced wildly popular parodies of successful kids’ properties like DIARY OF A WIMPY DEAD KID and THE FARTING DEAD. Now the company’s publishing program is moving to the next stage. In March 2015, Papercutz plans to release its first original graphic novel (not based on a pre-existing property), THE LUNCH WITCH.
The creation of children’s author Deb Lucke, THE LUNCH WITCH is an all-new 180-page graphic novel, detailing the travails of Grunhilda, a witch who has to find other employment because “nobody believes in magic anymore.” Since her only skill is cooking up pots of foul brew, it’s only natural that Grunhilda ends up as a school lunch lady. Although she tries hard to continue her evil ways, she ends up befriending a little girl named Madison. Madison needs Grunhilda’s help but doing something nice for another person violates the Witches’ Code. Will Grunhilda turn her back on Madison and stay true to her evil upbringing? Or will she decide that friendship is more important than her witchy past?

“We’ve published original graphic novels for adults for almost 40 years at [Papercutz’s sister company] NBM,” explained Papercutz Publisher Terry Nantier. “And ever since we started Papercutz, I’ve wanted to create quality original material for kids. When Deb Lucke sent us her proposal for THE LUNCH WITCH, I knew we’d found the perfect property to launch into all-new, creator-originated graphic novels for young readers.”

With artwork inspired by the likes of Tim Burton and Edward Gorey, two female lead characters, and a tween target audience, THE LUNCH WITCH is decidedly different from most other original graphic novels being published. Throw in a unique format (180 pages, 6 ¼ X 7 ¾ paperback with French flaps) and you have a title that will stand out on the shelves.

“There’s no point in publishing original material if it’s not, in fact, original,” opined Papercutz Editor-in-Chief Jim Salicrup. “Deb Lucke has a unique voice and a unique art style that immediately capture the reader’s imagination. She’s developed a pacing to her narrative that gives you time to really get to know the characters. As a result, you’re deeply invested in what happens to them and seeing how they will resolve their problems. It’s the kind of story that could really only be told in a graphic novel format, free from the constraints of monthly comics or other illustrated media.” While THE LUNCH WITCH is only the first in a planned series of original graphic novels from Papercutz, it’s a perfect example of the company’s plans for this new line.

“If there’s a consistent theme to our publishing philosophy it’s diversity,” said Nantier. “Our goal at Papercutz is to create all kinds of kids comics for all kinds of kids. And THE LUNCH WITCH looks and feels different from anything else that we publish. At the same time, I can totally see it appealing to the type of young reader who has enjoyed ARIOL or GERONIMO STILTON. The common element they all share is quality storytelling and a unique narrative voice that allows kids to experience a whole new world.”
Sounds like magic to us.