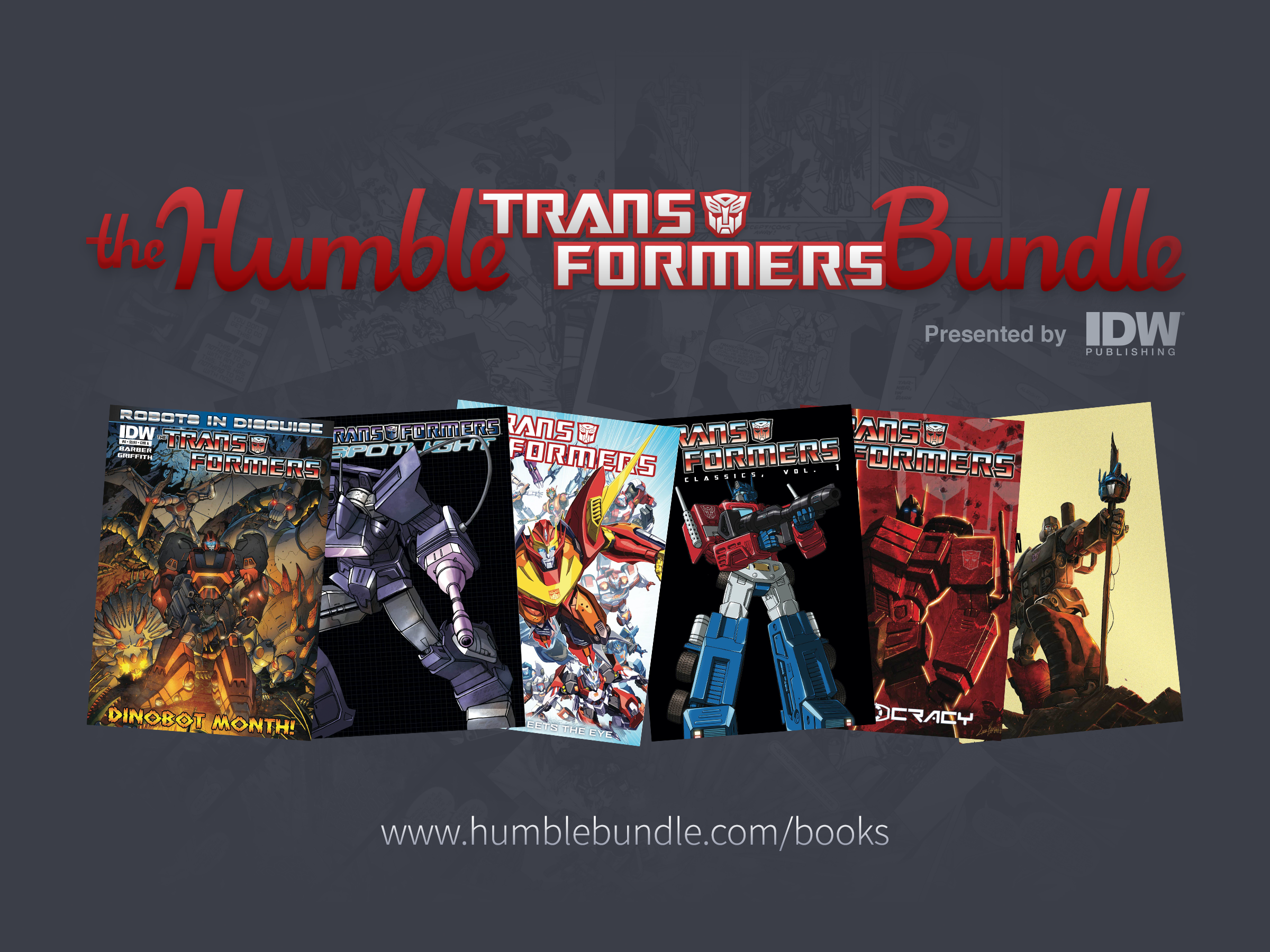 Here’s a bundle that’s “more than meets the eye.” Humble Bundle and award-winning publisher IDW Publishing, under license from Hasbro, are kicking off San Diego Comic-Con with a digital comic collection of epic proportions. Customers can pay what they want while also supporting a child-focused charity in the Transformers Humble Bundle presented by IDW.

“The iconic TRANSFORMERS brand is celebrating its 30th Anniversary this year and can’t think of a better way to celebrate than with this bundle offering. Whether a new reader who wants to get in on the epic TRANSFORMERS adventure, or a long-time fan looking to round out their digital comic collection, this offering is the perfect combination of classic and current stories,” said Michael Kelly, Hasbro’s Director of Global Publishing. “Add the fact that a portion of the proceeds will be used to support an amazing charity like the Hasbro Children’s Fund, and you’ve got an event Optimus Prime himself would be proud to join.”

“We’re very happy to collaborate with Hasbro to offer this mega selection of Transformers comics,” said Jeff Webber, IDW’s VP of Digital Publishing. “This bundle highlights all the facets of IDW’s Transformers line – Classics from the ‘80s, stories from the beginnings of the IDW’s stories of the TRANSFORMERS Universe, and some of the latest and greatest comics!”

As with all Humble Bundles, customers can choose how their purchase dollars are allocated, between the comic creators, Humble Bundle, and the determined charity (the Hasbro Children’s Fund).

About Humble Bundle
Humble Bundle organizes pay-what-you-want plus charity promotions for awesome digital content and puts the power directly in the hands of the consumers, offering them fully-featured titles at prices they set themselves. Consumers pay what they want and decide how to allocate their money between content creators, charity and a humble tip. Humble Bundle also offers the Humble Store, a digital storefront that features great games at great prices with a portion of sales going to select charities. Since the company’s launch in 2010, Humble Bundle has helped empower its community to allocate more than $40 million toward charity to date. For more information, please visit https://www.humblebundle.com.

About Hasbro Children’s Fund
The Hasbro Children’s Fund, Inc. is a 501(c)(3) nonprofit whose mission is to empower childhood by bringing “the sparkle of Hope, the joy of Play and the power of Service” into the lives of the children across the globe. Working with strategic charitable partners, the grants made through the Hasbro Children’s Fund support programs that deliver; stability for children in crisis; pediatric physical and mental health services; hunger security; educational programs; quality out of school time programming and programs that empower youth through service. To learn more about these programs and how they are making a difference for children worldwide, please visit www.hasbro.org.

About Hasbro
Hasbro, Inc. (NASDAQ: HAS) is a branded play company dedicated to fulfilling the fundamental need for play for children and families through the creative expression of the Company’s world class brand portfolio, including TRANSFORMERS, MONOPOLY, PLAY-DOH, MY LITTLE PONY, MAGIC: THE GATHERING, NERF and LITTLEST PET SHOP. From toys and games, to television programming, motion pictures, digital gaming and a comprehensive licensing program, Hasbro strives to delight its global customers with innovative play and entertainment experiences, in a variety of forms and formats, anytime and anywhere. The Company’s Hasbro Studios develops and produces television programming for more than 180 territories around the world, and for the U.S. on Hub Network, part of a multi-platform joint venture between Hasbro and Discovery Communications (NASDAQ: DISCA, DISCB, DISCK). Through the company’s deep commitment to corporate social responsibility, including philanthropy, Hasbro is helping to build a safe and sustainable world for future generations and to positively impact the lives of millions of children and families every year. It has been recognized for its efforts by being named one of the “World’s Most Ethical Companies” and is ranked as one of Corporate Responsibility Magazine’s “100 Best Corporate Citizens.” Learn more at www.hasbro.com.