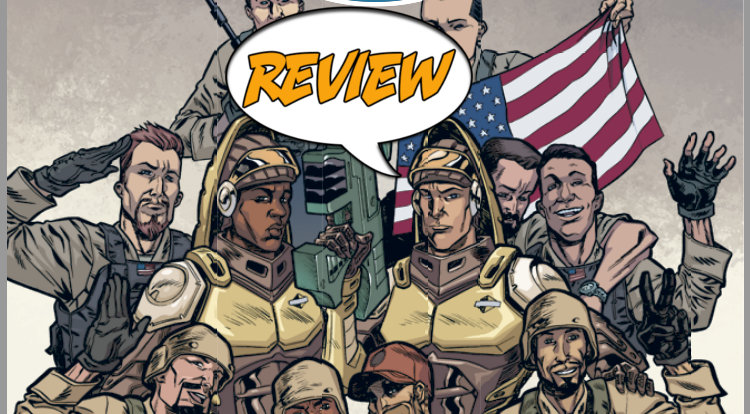 President Blades gets and implied pronunciation of his last name and challenged for his switch military action, while out in space the Chandelier turns on for the first time. Charles Soule’s Letter 44 has been on point since its launch. Letter 44 #8 gives one of the biggest payoffs of the season so far. Throughout the issue Soule throws several small revelations out to readers and it kept my eyes glued to the panels across the twenty-two pages.

Letter 44 #8 opens in an unfamiliar setting – a cave in Afghanistan. Several America troops are being pressed back, some injured, and things aren’t looking good for them. There is no need to worry as a solider – who has more the appearance of Shining Night than a US soldier – appears with the most incredible piece of technology to have ever entered the contemporary field of combat. He not only rescues his fellow soldiers, but reveals what appears to be a technological armada come to end the war in ninety days as explicitly set down by President Blades.

Back in Washington, Letter 44 #8 continues in the White House Press Briefing room with President Blades coming under fire as a result of his recent military press. Blades passes the concern of the press off charmingly before he is berated by both his Press Secretary and Secretary of State over his increasingly secretive behaviour. In this issue Blades comes under fire from all potential fronts – including a scene where we has to verbally smack down a Congressman – and a lot of his actions could appear questionable if the reader were not in on the immense amount of pressure he, as a character, is under with a spatial attack immanent at best. Soule does an excellent job of assuring the reader that President Blades is – and can be – in control, which cements him as a good person to have in charge for the coming conflict.

Clarke Mission is in rough shape, the crew is at odds about the appropriate course of action. Letter 44 #8’s main focus in the astronaut storyline is actually on the health of Astra – Charlotte’s baby daughter – Kyoko gives the child the best physical examination she can given the fact that she is not an OB-GYN, but saves the more shocking revelations about Astra’s health for her personal logs. In this act she has stepped into the deceptive role, which will certainly come to a head in future issues.

The final page of Letter 44 #8 focuses on the Chandelier, the structure being constructed out in space – as it takes the first step toward what the readers and characters have been expecting from the start.

GETTING BETTER AND BETTER

Alberto Jimenez Alburquerque is not my favourite artist working in the comics industry right now. All that bias out of the way, I think Letter 44 #8 is probably his best work to date. President Blades, in particular, looks striking drawn from extreme angles throughout the issue.

While the scenes that take place inside the White House look polished in the way that readers have come to expect from this setting – in contrast scenes involving the Clarke Mission and it’s oft zero gravity atmosphere are fluid and lovely. The delicate ways the astronauts float when they are at the window observing the Chandelier lends a sense of gravitas to Charlotte, Kyoko and Astra’s scene together in the infirmary when Earth-level gravity and health concerns abound.

Alburquerque has really come into his own with this series and Letter 44 #8 really speaks to his talent as an artist and understanding of the subject matter Soule presents him with. As Letter 44 continues more and more toward the realm of science fiction I look forward to seeing what Alburquerque presents readers with.

Letter 44 #8 is the latest edition to a great series. Charles Soule and Alberto Jiminez Alburquerque are both on the top of their game and you’ll not only be entertained, but feel a lot smarter after you’ve read this issue.